I am reading the pronoun in the emphasized clause to refer to either "my word be that goeth forth out of my mouth" (v. 11), so that the passage would indicate that the word that comes forth shall be to Yahweh for a name (of calling), or otherwise that the pronoun "the mountains and the hills shall break forth before you into singing, and all the trees of the field shall clap their hands" (v. 12) and so the passage would indicate that these miraculous signs shall be a name (of character or renown).

Is either one of these a more reliable reading? Am I missing "it" altogether?

Instead of the brier, a cypress shall rise;
Instead of the nettle, a myrtle shall rise.
These shall stand as a testimony to the LORD,
As an everlasting sign that shall not perish.

I came across your intriguing question and I felt compelled to 'tuck in'.

The briers, the thorns and the scorpions are the rebellious. It's same figure of speech in
Isaiah 55:13

Trees are symbolic for people when their deeds are the subject matter;

6 And all the men of Shechem gathered together, and all the house of Millo, and went, and made Abimelech king, by the plain of the pillar that was in Shechem.
7 And when they told it to Jotham, he went and stood in the top of mount Gerizim, and lifted up his voice, and cried, and said unto them, Hearken unto me, ye men of Shechem, that God may hearken unto you.
8 The trees went forth on a time to anoint a king over them; and they said unto the olive tree, Reign thou over us.
9 But the olive tree said unto them, Should I leave my fatness, wherewith by me they honour God and man, and go to be promoted over the trees?
10 And the trees said to the fig tree, Come thou, and reign over us. .
.
.
16 Now therefore, if ye have done truly and sincerely, in that ye have made Abimelech king, and if ye have dealt well with Jerubbaal and his house, and have done unto him according to the deserving of his hands;

From the above verses, the trees depicted Israel;

22 Then the men of Israel said to Gideon, "Rule over us, both you and your son, also your son's son, for you have delivered us from the hand of Midian."
23 But Gideon said to them, "I will not rule over you, nor shall my son rule over you; the LORD shall rule over you."

The olive, the vine, the fig, etc denoted more noble individuals than Abimelech, his own slain brothers, himself as the bramble.

In Isaiah 55:13 God signifies by a thorn and a brier, a type of people that walks in specific rebellious ways relative to another type of people, denoted as the fir and the myrtle, that walk in righteous ways. The latter category are those for a name to the LORD, a name that will not be cut-off.
Cut-off is a term specific to judgement upon wicked spirits.
Note below that even when an idolater has already been killed, or in the case when people have no will to kill him, God says he will 'cut him off'; what Matthew 10:28 properly summarises.

A name here denotes essence, what makes an angel to be an angel, for example or a human being to be a human. That is the name meant here. That is to say, concerning a people with a wicked nature that plagued Israel, and this wickedness is also categorised by the presence of a thorn and a brier, the LORD promises to 'form' a people with a righteous nature in the symbols of fir and myrtle. This has always been God's plan for Israel; This new nature or essence is the name that will not be cut-off.

A sign is contextual, denoting a servant who convenes, in Isaiah 66:19 & Matthew 24:30, it's messiah. But in this case of Isaiah 55 the sing refers to a permanent feature of reference, as a reminder, as meant in;

Also I gave them My sabbaths to be a sign between Me and them, that they might know that I am the LORD who sanctifies them.

So, whereas other 'names' can be 'cut-off', for example, the famous name of 666 having which sends one into the infernal lake, the essence or name that these fir trees and myrtle trees become, from above, is forever.

The essence or the new nature of the righteous people, these denoted as the fir and the myrtle, that is the referent of 'it shall be to the LORD for a name'. Simply put, it's His 'name', Isaiah 56:5 and Isaiah 43:7, forexample. . 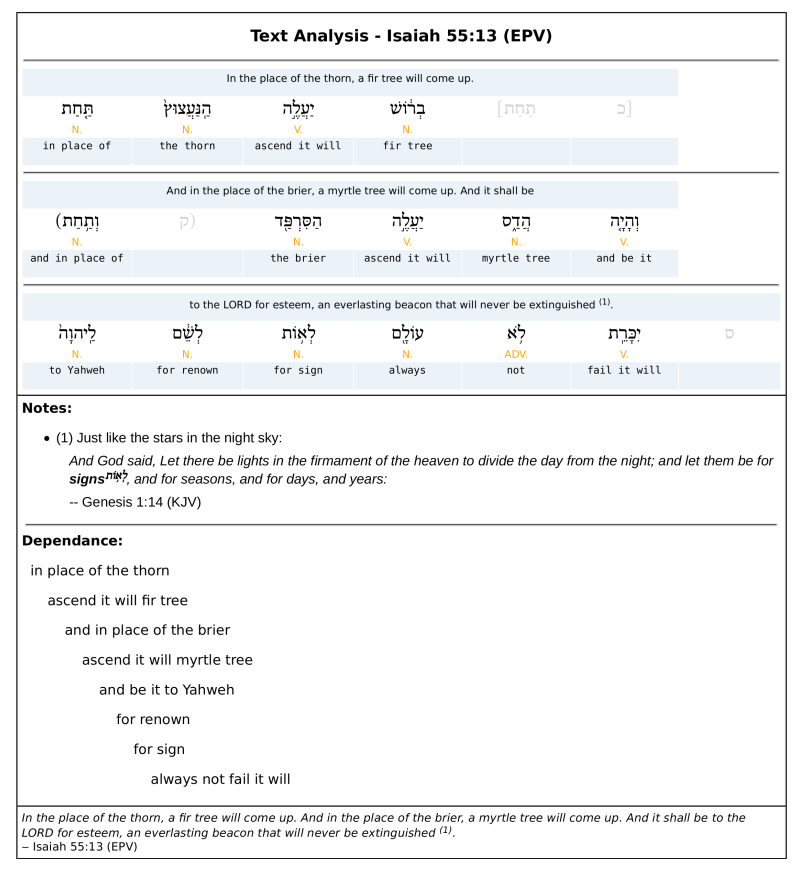 The first port of call for determining a referent, is surely the immediate context. The prophet is not coining a new name for God in this passage, but is depicting a state of blessing that will stand as an everlasting memorial to his goodness.

The miraculous transformation of a land of thorns and briers will cause the joy and singing and hand clapping referred to in verse 12, and it will be as perpetual as the stars in the night sky.

Not the answer you're looking for? Browse other questions tagged isaiah referent-identification or ask your own question.

4
Has the referent in Isaiah 53 ever been interpreted as anything non-human?
15
Does Isaiah 7:14 refer to a virgin?
6
What does "the government shall be upon His shoulder" mean in Isaiah 9:6?
4
In Isaiah 41:4, who is the referent of 'with' in the phrase 'and with the last I am He'?
3
In Isaiah 45:23 is God saying that all shall bow to God or to Cyrus?
2
What is Isaiah 29:4 describing when he says "deep from the earth you shall speak"?
3
Isaiah 45:25 In the LORD all the descendants of Israel Shall be justified, and shall glory. Really? ALL?
3
Isaiah 33:6b-The fear of the LORD is His treasure - what entails "fear of the LORD," and what "His treasure" specifically means?
1
Who will return to the LORD in Isaiah 19:22?
3
Does Isaiah 66:24 in Hebrew showcase the reality of the bodies of the Resurrected Unsaved?