In Gen. 4:7, why is the participle רֹבֵץ declined in the masculine gender?

My question concerns the word רֹבֵץ, a participle declined in the masculine gender. But, the word it modifies, or so it seems, חַטָּאת ("sin"), is a noun possessing a grammatically feminine gender. In Hebrew, like many other languages, the participle modifying a noun must agree in gender (among other things) with the noun.

For example, in Basics of Biblical Hebrew Grammar, it is written,

Why then is רֹבֵץ declined in the masculine gender?

The most common explanation for this text and its perplexing syntax -- without recourse to emendation -- is that רֹבֵץ is said to be a "nominalized participle", and thus not subject to the gender agreement of a typical participle or adjective. So the solution is not to be found in some nuanced understanding of חַטָּאת, which is where I would first have thought to look. The idea would then be something like this:

A variation on this theme is to understand רֹבֵץ not as a participle, but as reflecting Akkadian rābiṣu (see Chicago Assyrian Dictionary, R, pp. 20ff.):

The possibilities this connection offers are explored by a number of commentators, and at greatest length by E.A. Speiser in Genesis commentary (pp. 32-33; in 1964, one of the earliest in the Anchor Bible series which morphed considerably as it progressed).

However, this explanation appears not to be known to Barry Bandstra, who offers quite a different discussion in his Genesis 1-11: A Handbook on the Hebrew Text (Baylor, 2008), p. 240: 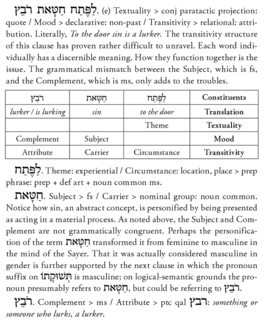 Here the discussion is much more about whether חַטָּאת can somehow be regarded as masculine. But, if cogent, the older "nominalized participle" explanation seems much more simple. It might, perhaps, have an analogue in the ad sensum construction in Ecclesiastes 12:9 (see Waltke-O'Connor, Introduction to Biblical Hebrew Syntax (Eisenbrauns, 1999), p. 109 = §6.6b)

What a wonderful thought Word science exploration group. The characters are unavoidably in gender conflict, which for us grammar police, is disturbing:-) An infusion of a broad collective knowledge light brought to bear on this incongruous detail (just to throw an off the map thought into the mix) is that, sin at the beginning (feminine, weaker) desires to devour and become stronger, with the masculine ending. That is in fact, how the influences of sin and wrong become stronger and more dominating over a persons life.. as it did lead Cain across the line from his already developed rage prone disposition, into actual murder.