When translating Job 42:8, most English Bibles are basically the same as ESV:

Now therefore take seven bulls and seven rams and go to my servant Job and offer up a burnt offering for yourselves. And my servant Job shall pray for you, for I will accept his prayer not to deal with you according to your folly. For you have not spoken of me what is right, as my servant Job has.”

The point of inquiry is regarding what is translated "according to your folly."

I will accept [his prayer] so as not to do folly with you.

There is no second person plural suffix that would indicate that the נְבָלָ֔ה is that of Job's comforters, but rather appears to be a potential נְבָלָ֔ה of God himself, that he wishes to avoid.

Are there serious grammatical or syntactical reasons why so many translators understand נְבָלָ֔ה as that of the comforters rather than of God? Or is it merely theological uncomfortableness that has led so many to translate something like "according to your folly"?

I am primarily interested in an objective grammatical analysis of the text.

A Range of Possibilities

There is certainly some versatile grammar here for the phrase in question:

And while you state...

...I do not believe that translation issues can be resolved without looking at:

For the discussion, I am using HALOT word glosses1 and information from Williams' Hebrew Syntax.2 Some things to note then about feasible grammatical/syntax possibilities:

So you give the ESV's:

Can that be mapped to the possibilities? I believe so.

In other words, I believe that both of these translations are different ways of saying the same thing, the first more literal to Hebrew structure (from above analysis), the second (ESV) refined for English sensibilities:

for I will accept [his prayer] by [the] folly not working against you.

The former uses the context to glean that "[the] folly" is speaking of the definite folly just discussed in v.7 and end of v.8. But the former is awkward to English ears, and it seems reasonable to indicate that the dealings with them is "according to" that folly of theirs.

There are some other possibilities that avoid theological issues of God being stupid or doing willful sin Himself. Consider:

The various possibilities for the words, coupled with the clear immediate context in v.7-8 of a twice named "folly" on the part of the friends, and then the overall context of the book of Job showing a righteous and just God indicates that a translation where the folly is associating to the friends, not God. At least four ways to translate were demonstrated; but all four in the whole scheme communicate the same key concepts, just with different emphases:

Note that with all four possible translations explored, the preferable way the folly is put where the context indicates it should be, on the friends, is by considering the folly to be in a subjective relationship to the infinitive construct (the first three translations give), and the whole phrase being an explanatory or purpose/result idea for what will come about (or not) if they fail to heed the command to bring the sacrifices.

1 Ludwig Koehler, Walter Baumgartner, M. E. J. Richardson, and Johann Jakob Stamm, The Hebrew and Aramaic Lexicon of the Old Testament (Leiden: E.J. Brill, 1994–2000); all references are to the word entry in question.

My own translation of Job 42:8 reads:

Now take seven bulls and seven rams and go to my servant Job. You shall offer a burnt offering for yourselves, and Job my servant will pray for you. Him only will I esteem, so as not to do what is improper: for you have not spoken about me fittingly, as has my servant Job.

The details of how I arrived at this are shown here: 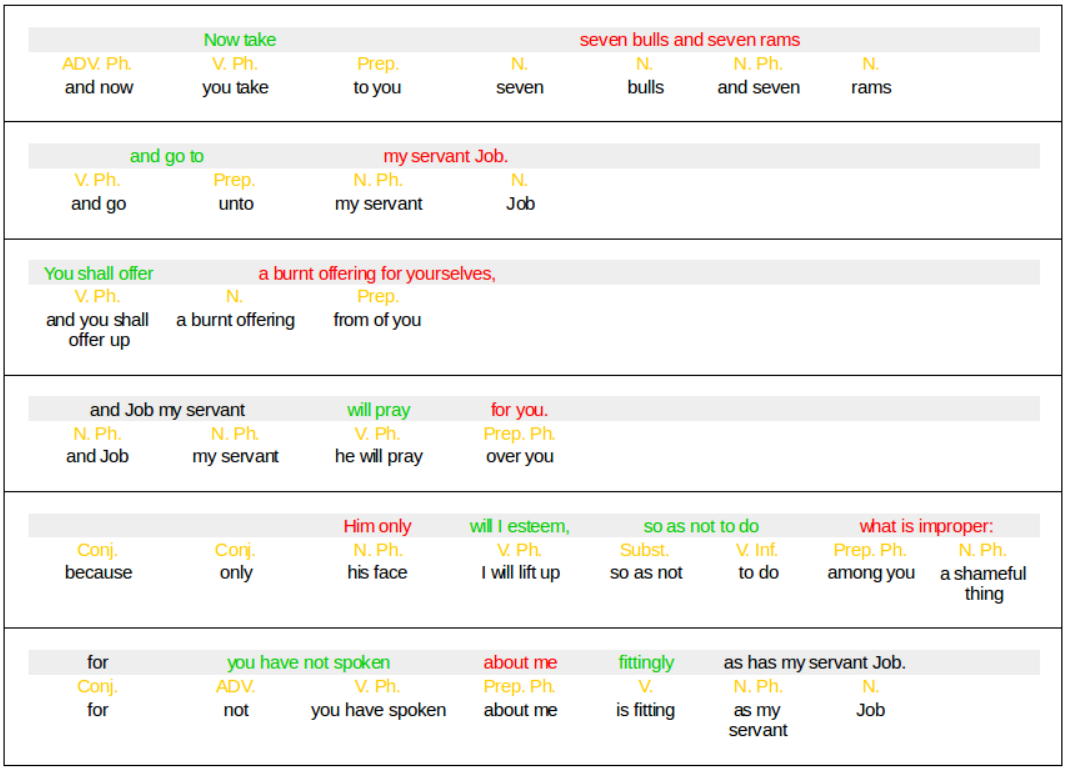