In 2 Thessalonians 2:11, to what does διὰ τοῦτο refer?

Is it the preceding verse or the next verse?

2Th 2:10 and with all wicked deception for those who are perishing, because they refused to love the truth and so be saved.

2Th 2:12 in order that all may be condemned who did not believe the truth but had pleasure in unrighteousness.

Related: Does God send a “Strong Delusion”? What is the Context of understanding 2 Thess. 2:11?

The Grammar of διὰ τοῦτο

The Greek phrase διὰ τοῦτο occurs 62 times in the Textus Receptus (Stephanus, 1550), most often in the Gospel of John.

It is translated a variety of ways, all possessing the same general sense:

According to Thayer, διὰ τοῦτο refers to "the reason or cause on account of which anything is or is done, or ought to be done."1

Perhaps one of the simplest demonstrations of its usage can be found in Luke 14:20, in which it is written,

And another said, "I married a wife, and for this reason, I cannot come."

Sometimes διὰ τοῦτο is followed by ὅτι. In such instances, the reason that διὰ τοῦτο refers to no longer precedes it. Instead, it follows διὰ τοῦτο after ὅτι.

and for this reason, the Jews persecuted Jesus and sought to kill him, since he did these things on the Sabbath.

To what does διὰ τοῦτο refer? It refers to the statement following it and ὅτι ("since"). The Jews persecuted Jesus and sought to kill him for this reason: since he did these things on the Sabbath.

Rarely, the order is reversed and ὅτι precedes διὰ τοῦτο. The reason that διὰ τοῦτο refers to now precedes it after ὅτι.

To what does διὰ τοῦτο refer? It refers to the statement following ὅτι ("since") and preceding διὰ τοῦτο. The world hates them for this reason: since they are not of the world.

Thayer reckons the occurrence of διὰ τοῦτο in 2 Thes. 2:11 under the first category I discussed, what I referred to as "διὰ τοῦτο in Isolation." 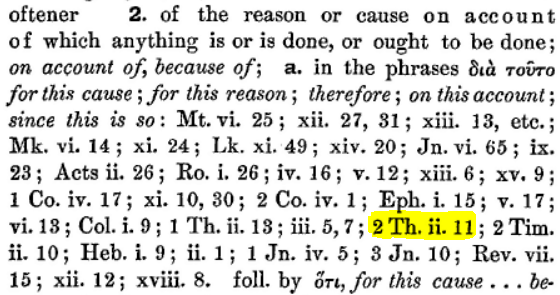 Admittedly, it does occur in isolation in 2 Thes. 2:11 (i.e., it is not preceded or followed by ὅτι). However, it is preceded by ἀνθ’ ὧν in 2 Thes. 2:10 which essentially functions in the same manner as ὅτι. That is, the reason to which διὰ τοῦτο refers follows ἀνθ’ ὧν, just as it followed ὅτι in the aforementioned examples.

In his entry on ἀντί, concerning ἀνθ’ ὧν, Thayer wrote,2