How old is the Passover animal required to be in Exodus 12:5?

According to Exodus 12:5 is the animal required to be

Exo 12:5 Your [?] shall be without blemish, a male of the first year: ye shall take it out from the sheep, or from the goats:

Actually, the nature of my question is related to what the Hebrew idiom "son of a year" means. After posting this question I located the following section of the entry for "son" in Wilhelm Gesenius' Hebrew Lexicon: 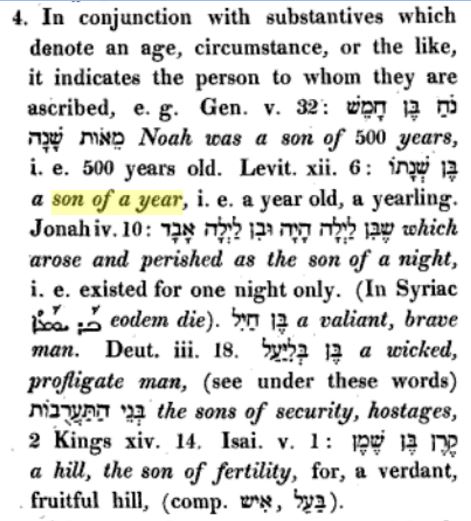 Gesenius' Lexicon is, I am told, the most authoritative lexicon of the Hebrew language for Biblical studies.

So we'll see in our English texts that so and so was 500 years old but the Hebrew actually says "a son of 500 years". This confirms my understanding from other contextual clues.

However, modern Jews celebrate Passover with a lamb rather than a yearling and I've seen commentators say that the term actually means "less than a year old". So there is a controversy.

Can anyone provide a reason that to conclude that the usage "son of a year" in reference to the Passover (and apparently only to the Passover) indicates a lamb less than a year old?

exodus passover
Share
Improve this question
edited May 19 '18 at 13:28

God commanded that new born sheep and goats remain with their mothers for seven days.

Likewise you shall do with your oxen and your sheep. It shall be with its mother seven days; on the eighth day you shall give it to Me. -Exodus 22:30

When a bull or a sheep or a goat is born, it shall be seven days with its mother; and from the eighth day and thereafter it shall be accepted as an offering made by fire to the Lord. -Leviticus 22:27 (NKJV)

Therefore the sheep or goat for the Passover could not be younger than 8 days and not older than 1 year in age. As such, an animal 1 year and a day old would not be acceptable as it would no longer be "of the first year" but instead of its second year.

a male of the first year; anyone within that time, but not beyond it; denoting the strength and vigour of Christ, in the flower of his age, his short continuance among men, and his being tender and savoury food for the faith of his people {John Gill}

Of the first year—i.e., not above a year old. As children are most innocent when young, so even animals were thought to be. {Ellicott}

The lamb was to be not only perfect, and a male, but of the first year: Hebrew, a son of the year, i.e. not exceeding the first year in age. [...] And, as they were not to be offered after the first year, so were they not to be offered before they were eight days old; see ch. Exodus 22:30. Leviticus 22:27 before which time they were scarcely supposed to have attained the perfection of animal life, or to have been sufficiently purified. Pliny says, Pecoris foetus die octavo purus est, the young of cattle are pure on the eighth day. {Thomas Coke}

If Lambs 8 days to less than one year are acceptable, then it restricts the offerings of "yearlings" to the "produce of the land" of that year - i.e. the lambs born in that year are to be sacrificed only in that year and not beyond. In a way, it follows the principle of Ex 12:10, but stretched out to fit the agricultural year.

Exodus 12:10 Do not leave any of it until the next morning. Burn whatever is not eaten before morning.

I've come to this recognition after studying Islamic sacrificial processes which require older animals (even Zakat animals - "tithe" must sometimes be 4 or 5 year old animals https://sunnah.com/urn/2058010)

There are real practical consequences to this. Cost.

According to sellers, there are smaller goats for around Dh500 per head but they are not suitable for sacrifice because they are too young.

And then think of the wastage of meat - as happens also in the islamic context. https://www.thenational.ae/world/flash-freezing-takes-care-of-surplus-meat-from-haj-sacrifice-1.310668 Think about goat or lamb sizes and consider the practicality of a family of say four persons, having to consume an entire fully grown goat or sheep in one meal. Certainly, it would mean inviting many families together to eat it not simply your next door neighbour!

10
What is the significance of cooking the passover lamb by fire rather than boiling?
6
On what day was the Passover lamb slaughtered?
5
Why was Abraham required to bring three year old offerings/sacrifices in Genesis 15:7?
2
Which bitter herbs were required to be eaten in the original Passover and why? (Exodus 12:8)
3
Why the leaven prohibition in Exodus 23:18 and Leviticus 2:11?
2
At what three times were Israelites required to make a pilgrimage to the tabernacle?
3
Was blood sprinkled on the door posts of neighbours who had also partaken of the lamb in Exodus 12:4-13?
3
Exodus 12:39 says the dough was without yeast because the Israelites had been driven out of Egypt
3
How to interpret Exodus 16:29?