Re. The Crucifixion: Possible to Correlate Timekeeping and Calendar Systems?

Is it possible to correlate the Methods of Time Keeping, with corresponding Calendar Systems?

In the Gospels, it is suggested that there is a contradiction - which may be resolved by pointing to two different timekeeping systems - how hours of the day are reckoned. (See In the Gospels, How Should the Hours of the Day be Understood?.)

Could those different timekeeping systems indicate which calendar system was in in use at the time - to know when the 14th, and 15th of Nisan, (Passover), actually started?

Some certainly known Time and Calendar Systems in Use - at that Time:

At that time of Spring, (the Vernal Equinox), the hours of the day would have corresponded with each other - regardless of the System used.

The first problem in using the day is to decide when it begins and ends – its phase – so that events may be assigned to a day without ambiguity. Some nations decided to begin their day at dusk, and some at dawn: the Egyptians chose dawn, as did the pre-Exilic Jews. The Babylonians chose dusk, which was generally followed by post-Exilic Jews. The Chinese and the Romans chose midnight, as we do ourselves today. People soon needed a more accurate measure of time, and it had to be one that was easy to establish and which everyone could agree on.

E. G. Richards says in Mapping Time:The Calendar and its History, page 44, early attempts to subdivide the day more precisely resulted in ‘hours’ whose duration (perhaps one twelfth part of the period from dawn to dusk) depended on the season, and which were called 'temporal hours': there were always exactly twelve hours of daylight, but the hours were longer in the summer than in the winter. The twelve hours of daylight were measured with remarkable simplicity by a vertical post or gnomon. The 'first hour' began when the sun rose over the horizon and the shadow of the horizon reached the first mark. The 'sixth hour' occurred when the sun was due south, and the gnomon cast no shadow either west or east of the post. When the gospels refer to the third hour, the sixth hour or the ninth hour, they are referring to the temporal hours measured from sunrise, not the time since the 24-hour day began in different cultures.

Note: Richard says that because it is difficult to make clocks in which the lengths of the hours in the day and the night are different, the equinoctial hour started to replace the temporal hour from the fourteenth century, after mechanical clocks had started to be made in Europe.

In both the Babylonian, (Wikipedia Link, University of Singapore) and Roman Timekeeping Systems, the Hours of the Day began at sunrise.

Note: Regardless of when the Calendar Started, the Hours were synchronized to Sunrise and Sunset.

Because the Passover always followed the Spring Equinox, (the Month of Spring, Aviv, Exodus 13:4) - and given Jerusalem's latitude, there would have been 12 equal hours of day and night.

In other words, they would have all aligned - exactly:

Jesus' Parable Stating the Hours of the Day were from 1 to 12:

Indeed, it is verse 5 that holds interest for this posting. There is a biblical day that is simply provided for us in Genesis. The diagram below illustrates the individual components of His creation at the end of “day one”. 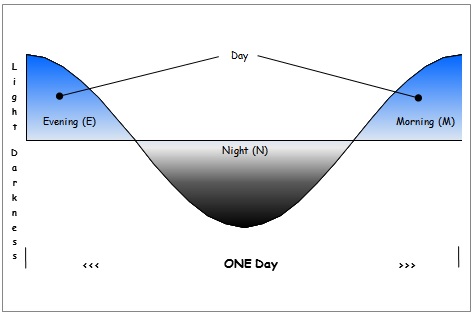 Repeating the above diagram into a Two-day diagram is depicted next. 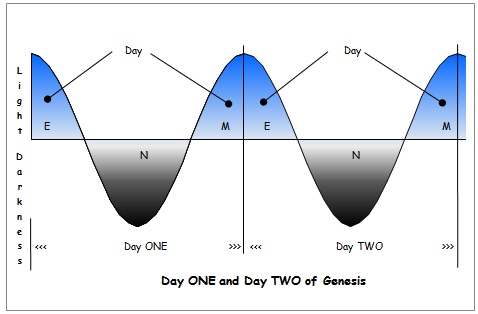 And thus the pattern repeats for a total of six days.

There are six occurrences of a Hebrew word (הָעַרְבָּיִם – e ◦orbim) translated “the-evening hours” in the Concordant Literal Version (CLV) [Exodus 12:6, 29:39, 41; Leviticus 23:5; Numbers 28:4, 8]. “The evening hours” offers good meaning though the word is simply, and more literal in meaning as, “the-evenings”. In each of these verses the הָעַרְבָּיִם is preceded by the word “between” (בֵּין - bin). One of “the evenings” is as the sun crosses the daylight of morning to 12:00 o’clock (noon) beginning its decent toward the horizon. The next “the evening” is as the sun disappears from visibility beyond the horizon. “Between the evenings”, or “between the-evening hours” is commonly understood by current reckoning as “afternoon”.

The English word “afternoon” is not used in the CLV of the bible. The KJV uses the word once in Judges 19:8.

An additional search on Strongs H996 (between) and H6153 (the-evenings) results in five additional verses, Exodus 16:12, 30:8; Numbers 9:3, 5, and 11. Exodus 30:8 is particularly telling. Aaron is to set up the lamps “between the evening hours”. This would be accomplished in the “after-noon” daylight hours in order to be ready for the approaching darkness of night. The next diagram pinpoints “between the evenings”. 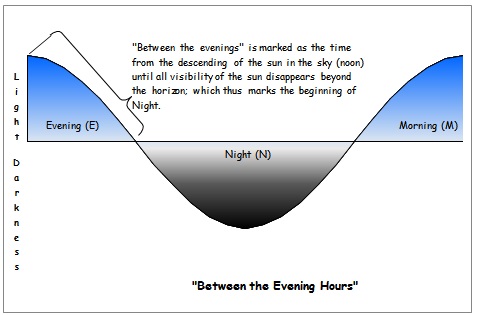 Our modern world depends upon timekeeping so precise that it takes into the effects of relativity to correct for infinitesimal variations. Not so the ANE. During the day one could measure time with the sun. I'm not sure how they measured at night! But overall the Roman system of measuring the time of day and the Jewish method were easily reconcilable just by shifting the start of the day by the appropriate difference in hours.

But dates would have been way trickier because at the time of the NT the Romans, like the Beatles, had an 8 day week:

In my experience those trying to reconcile the two calendars seem to suppose that the Romans had a seven day week and the apparent ease with which they reconcile dates across systems is illusory.

Not the answer you're looking for? Browse other questions tagged contradiction chronology passion-narrative babylon or ask your own question.

4
Historical Evidence that the Jewish Calendar Day Began at Sunset?
5
In the Gospels, How Should the Hours of the Day be Understood?
4
Luke 23:54 - How should "Sabbath Dawning" be Interpreted?
2
In Acts 3:1, What is the Significance of the Ninth Hour of Prayer?

18
Can John's Passion chronology be reconciled with that of the Synoptics?
11
Ancient Hebrew Calendar(s) and Modern Translations of "Years"
4
In the Gospels, Can "Day of:" the Passover - be Interpreted Idiomatically?
4
Historical Evidence that the Jewish Calendar Day Began at Sunset?
4
Luke 23:54 - How should "Sabbath Dawning" be Interpreted?
1
(John 1:39) Significance of "almost the tenth hour"
1
When was Peter's mother-in-law healed? Chronological contradiction?