Rom 6:4 Therefore, through baptism we were buried with him into his death so that, just as the Messiah was raised from the dead by the Father's glory, we too may live an entirely new life.

How might τῆς δόξης τοῦ πατρός effect a resurrection?

Or is this a mistranslation?

Note: BDAG suggests that "the glory of the father" is by extension indicative of his power and might:

I'm not just looking for a "linkage" to an "allowable sense" but rather to what the word choice was intended to communicate. In other words, what literary impact does this word choice have in this discussion of the resurrection of Jesus?

It can be a fool's game to hang Greek translations on prepositions, as the range of meaning is different from English and so we don't naturally read words in their intended range. But at least we have clues in this text to help us get started on the meaning of διὰ.

Fortunately this sentence uses the term twice, such that 'we were buried διὰ baptism into death' in the same way that 'the Messiah was raised from the dead διὰ the glory of the Father'. This does suggest the author's intention is indeed to use the word causatively, as the first διὰ is more plainly causative.

"Having been buried with him in baptism, you also have been raised with him through your faith in the power of God who raised him from the dead." - Colossians 2:12

In this second case Paul also happily swaps out the first διὰ for ἐν, demonstrating that being buried with Christ happens in/through baptism. Thus we should be hesitant to place too strong an emphasis on preposition choice. Incidentally, we see also ἐν in use by Jesus in a similar context:

This can be a challenging word for us in English, as its root lies in an intrinsic sense of worth or honour, literally evoking good opinion by its own merit. As BDAG assert, there is certainly an 'allowable' sense in which δόξης may encompass 'power' (or even authority) within its larger sense in some contexts as demonstrated by John 2:11.

In 2 Corinthians 3:11 Paul says that [that which was fading away] was literally διὰ δόξης, "through glory", referring back to 3:7 in the sense that the tablets of the Law were produced 'in glory'. This is not really a causative sense, as the sense of the passage suggests that the glory is more of an enveloping presence surrounding the law.

In 2 Corinthians 6:8 Paul also talks about his trials occurring διὰ δόξης καὶ ἀτιμίας, "through glory and dishonour", also in a non-causative sense where the 'glory' would appear to be a general, wider state of affairs.

Thus when we get to Romans and are trying to understand Paul's intention in διὰ τῆς δόξης τοῦ πατρός, we know that there is at the least a sense of envelopment in the δόξης of the Father, and at the most a direct causation.

Given our parallel in Colossians 2:12, a direct causation seems unlikely, given that the Christian's resurrection cannot be a direct causation of their own faith (ie. they can't be raising themselves). Ideally we need a sense in which both verses make sense.

A non-direct, consequential kind of causation fits with both passages - the Christian has been raised as an outcome of their faith, but not by the faith itself. The Messiah similarly was raised as a consequence of the Father's inherent glory and worthiness, not because that glory itself was the resurrecting force, but because that enveloping glory inherently demands that death should not hold him.

This makes sense in view of the NT's wider view of the Messiah, that he is the "image of the invisible God" (Col 1:15), the "radiance of God's glory and the exact representation of his being" (Heb 1:3), who "existed in the form of God" (Php 2:6). It is therefore not strange to consider this Messiah being raised as a consequence of the glory of the Father, as sharing this same glory would not permit him to remain in the grave.

The authorial intention of the passage is to teach on the new life of believers as that relates to the Messiah. In this context, where Paul is saying that the Christian's "entirely new life" is similar to the resurrection brought about διὰ τῆς δόξης τοῦ πατρός, this sort of aspirational tone fits well, and so I would translate approximately:

'Therefore, through baptism we were buried with him into his death so that, in the same way that the Messiah's resurrection was brought about by the glory of the Father, so [by that same glory] we should walk an entirely new life.'

Still, we should be careful not to make too much of a minor clause which could just be a throw-away phrase.

Separating Greek clauses can be a challenge, and so it could be that we are over-complicating the passage by trying to read in more than is actually there. For the sake of an extra comma, the meaning becomes much simpler:

Therefore, through baptism we were buried with him into his death so that, just as the Messiah was raised from the dead, by the Father's glory, we too may live an entirely new life.

It's possible that the 'by the Father's glory' is more of a subordinate phrase, rather than the actual point of the sentence. I can't propose this as my preferred choice as all translations I've found seem to uniformly associate the glory directly with the Messiah's resurrection, but at face value it certainly seems possible from how the passage is structured.

The literary picture within the Christian New Testament indicates that the Glory of the Father is the divine power of the Holy Spirit, by whom the Father raised Jesus Christ from the dead (Gal 1:1). For example, this phase “by the glory of the Father” (διὰ τῆς δόξης τοῦ πατρός) appears parallel in meaning to what Jesus told Mary and Martha in the following passage.

John 11:40-43 (NASB)
40 Jesus *said to her, “Did I not say to you that if you believe, you will see the glory of God?” 41 So they removed the stone. Then Jesus raised His eyes, and said, “Father, I thank You that You have heard Me. 42 I knew that You always hear Me; but because of the people standing around I said it, so that they may believe that You sent Me.” 43 When He had said these things, He cried out with a loud voice, “Lazarus, come forth.”

The Glory of God had raised Lazarus from the dead, which Mary and Martha witnessed. This glory is the divine power of the Holy Spirit, by whom the Father had also raised Jesus from the dead.

The Greek prepositional phrase “διὰ τὸ...αὐτοῦ πνεῦμα” is accusative, which provides more causal emphasis than the genitive “διὰ τῆς δόξης τοῦ πατρός.” In other words, the nuanced difference would be on account of His Spirit (“διὰ τὸ...αὐτοῦ πνεῦμα”) versus by the glory of the Father (“διὰ τῆς δόξης τοῦ πατρός”). It is the same Greek preposition διὰ, but the accusative is more “accusatory” in the explicit agent of cause than the simple genitive. In other words, the Holy Spirit is the explicit cause of resurrecting the dead to life.

In summary, the “Glory of God” had given mortal life to the dead body of Lazarus. In the Book of Romans, “the Spirit of Him” (that is, of the Father) had also raised Jesus from the dead. In other words, this Glory of the Father (“διὰ τῆς δόξης τοῦ πατρός”) is the Holy Spirit, by whom the Father raises the dead to life.

Therefore we were buried with him by means of the baptism into his death, that just as Christ was raised from the dead by means of the glory of the Father, so also we should walk in newness of life.

My reasoning for this is shown below: 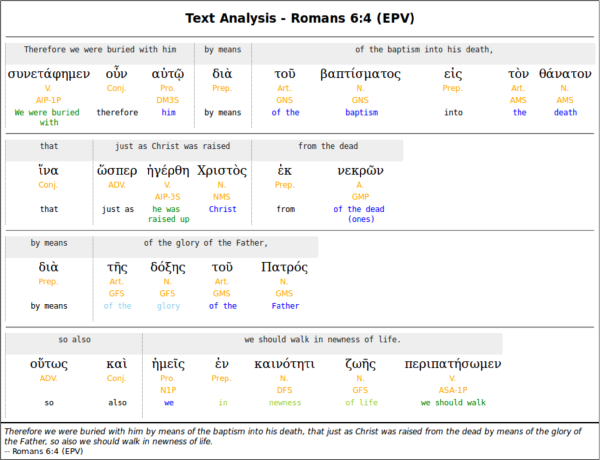 When Paul says, "that Christ was raised from the dead by means of the glory of the Father", he is confirming what Jesus said of himself:

So, Jesus raised himself from the dead by his own power. Power that was given to him by the Father. Power to make him shine, and that shining is the preeminent manifestation of the "glory of" the Father.

6 For God, who commanded the light to shine out of darkness, hath shined in our hearts, to give the light of the knowledge of the glory of God in the face of Jesus Christ.

The glory of God is manifest by "physical phenomena" that can be observed and testified to.

16 Let your light so shine before men, that they may see your good works, and glorify your Father which is in heaven.

The Spirit provides the fuel for "the glory" of the Father, i.e. the knowledge and wisdom and understanding of the deep things of God that motivate people to want to do and say things to advertise the goodness of God. The words and the deeds will be "the glory" — the proof that one's light is fueled by the Spirit.

Paul adds that Christ was raised “through the glory of the Father” (vs.4) “Glory” is the essential character of God (Lloyd-Jones), the sum of all His perfections (Hodge). God reveals and expresses His glory in different ways. Here He manifests it by exerting His power that accomplished the resurrection of Christ, cf. John 11:23,40 (Cranfield, Hodge, Murray). So in my view "the glory of the Father" is the manifestation of the Father’s power.