The bolded phrase gets tucked into the dependent clause of the last line in nearly all translations:

so they too have now been disobedient
in order that by the mercy shown to you they also may now receive mercy.

Despite the looseness of Greek word order, I'm not accustomed to phrases that are part of a dependent clause occuring before the subordinating conjunction (ἵνα, "in order that"). I would have expected that we would need to construe it as part of the previous clause, modifying the verb "have been disobedient":

I'm not claiming that this makes good sense to me,2 only commenting that I can't figure out how to avoid it. Can anyone outline and/or point me to a discussion of the grammatical points that favor understanding τῷ ὑμετέρῳ ἐλέει as part of the ἵνα clause?

1. I have followed the ESV to the level of the phrase but used the Greek order for the final two lines. ESV is quoted in the second box.
2. . . . ὡς ἀνεξεραύνητα τὰ κρίματα αὐτοῦ καὶ ἀνεξιχνίαστοι αἱ ὁδοὶ αὐτοῦ.

I'm no Greek scholar but couldn't this (the dative along with the hina here) just be a case of a kind of virtually untranslatable "the mercy shown you being now to their mercy-being-shown-them" situation?

For I would not, brethren, that ye should be ignorant of this mystery, lest ye should be wise in your own conceits; that blindness in part is happened to Israel, until the fulness of the Gentiles be come in.
-- Romans 11:25

Paul goes on to say, Israel will be saved because God has promised to take away their sins [vv. 26,27]. Concerning THE GOSPEL they are enemies, but concerning THE PROMISE to their fathers' they are beloved (since God doesn't renege on His promises) [vv. 28,29]. Now, because they have not believed God in the past, His mercy has come to you [v 30].

Which brings us to verse 31, which I would translate like this:

Even so, these refuse now to be persuaded by the mercy shown to you, that they, themselves, might now be shown mercy also. 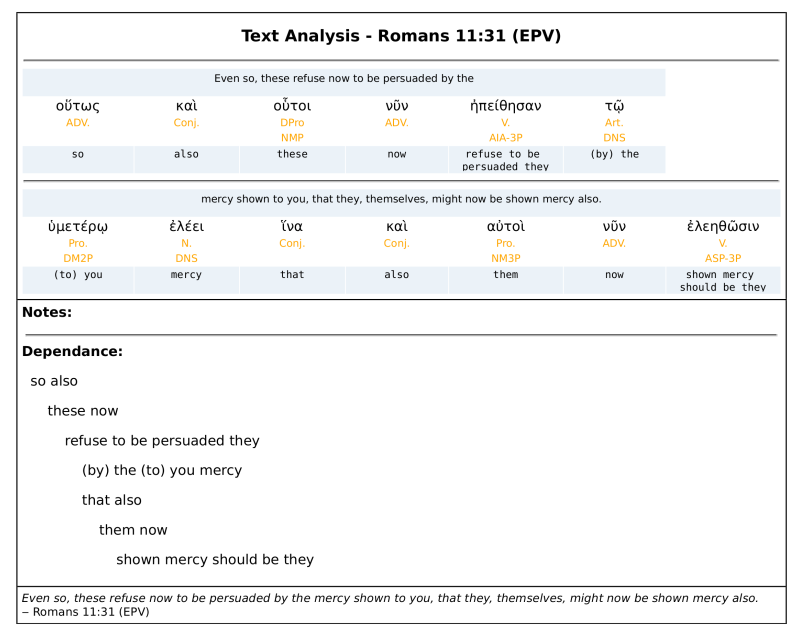 Focussing on the minutia of the Greek language can blind one to the substance of what is being communicated. Surely, the sensible approach to translation has to be: big picture first, then the minutia.

You only need as much of the minutia as is necessary to make sense of the big picture (Occam's razor). If you are spending too much time bogged down in the minutia, then the chances are very high that you have missed the substance of the message, and need to back out and try again.

Not the answer you're looking for? Browse other questions tagged greek romans grammar or ask your own question.

1
Why does sending Epaphroditus to the Philippian Christians make Paul less anxious?
14
Is Romans 3:24-26 original to Paul?
9
In Colossians 1:27, what is the meaning of “this mystery among the Gentiles, which is Christ in you, the hope of glory”?
0
Does the Apostle Paul imply that the unbelief of the Jews was the cause for the Gentiles to obtain mercy in Romans 11?
2
Which is the main verb of the sentence in 2 Peter 1,3-4?
0
What are the implications of Paul's use of the present tense of the verb δικαιόω (to justify) in Romans 3:24, 26, 28, and 4:5?
4
Does the Didache dictate that the "Lord's Supper" was to involve a real meal?
1
Order of action in two verses from Ephesians chapter 1 and 4
2
Why does the translation of the pronoun for light change within John 1?