How should Genesis 3:4 be punctuated?

In English usually after the word said we add a comma and a quote to designate when the speech began. In Hebrew I hope for some sort of structure language law. As an example:

Also an example of a snake talking would be nice. Or the bible mentioning any other animal speaking prior to the time of Babylon.

Where should the quotes and the comma go?

The following excerpt may help, which comes from Page 95 of Biblical Hebrew for Beginners (London: Society for Promoting Christian Knowledge, 1996).

Based on the explanation, the translation appears below. 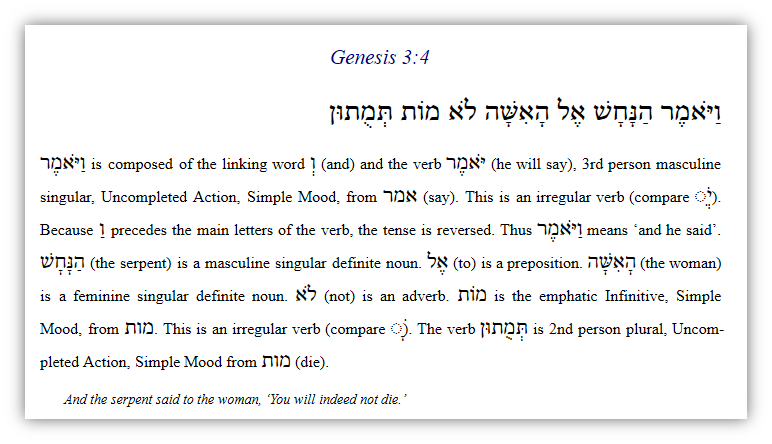 I need to straighten this first. I don't know how you got the Hebrew, because the Gen 3:4 I read is

ויאמר הנחש
then said the serpent

אל האשה
to the woman

How did you get the word "wife" or the word "age"? "Wife" is implicated when "woman" is used with a possessive. e.g., his woman, your woman. .

I don't think that [תמתון] means "shall die". I think [מתן] is a 2ndary root constructed from causative of [תן] give => get/be-recompensed.

Which means, the serpent was having a grammatical debate with the woman concerning verse 3. Because [תמתון] in verse three actually means

The serpent questions the woman,

did G'd say the word "death" when He said "recompensed"?

The fact that allowed the serpent to question "did G'd say death", is that verse 3 merely says [תמתון]="shall you-girl be recompensed". However, translators jumped the gun and somehow due to the presence of [מת] decided [תמתון] was an unusual but acceptable declension of [מת].

We need to read the Hebrew as it is written, not as we think it could be written.

The vav is often the used as punctuation. (Some people believe the vav also performs tense inversion, which is a completely nonsensical and anachronistic concept).

The vav is used a subsequence indicator, and therefore spontaneously punctuates a previous phrase.

For example in English,

He came And he saw And he conquered And the people cheered.

I don't see how else more of an answer I could provide, because the Hebrew of this verse is rather plain and simple.

Not the answer you're looking for? Browse other questions tagged hebrew genesis grammar syntax or ask your own question.