A little lower than angels, or lower for a little while?

Most translations render Hebrews 2:7 like the NIV: "…a little lower than the angels…", but several modern translations (eg NET, NASB etc) have a different sense like the ESV:

7You made him for a little while lower than the angels; you have crowned him with glory and honor, ESV

The ESV does not give Psalm 8 the same sense however:

5Yet you have made him a little lower than the heavenly beings and crowned him with glory and honor. ESV

Is the Greek ambiguous or are there clear textual indications that Hebrews 2:7 text should be read the way these modern translations indicate?

The ESV, NASB, et al aren't wrong per se, since βραχυ can include a reference to time.

Basically the ESV is doing a very slight but extremely justifiable interpretation for this verse.

5 For it was not to angels that God subjected the world to come, of which we are speaking. 6 It has been testified somewhere,

“What is man, that you are mindful of him,
or the son of man, that you care for him?
7 You made him for a little while lower than the angels;
you have crowned him with glory and honor,
8 putting everything in subjection under his feet.”

Now in putting everything in subjection to him, he left nothing outside his control. At present, we do not yet see everything in subjection to him. 9 But we see him who for a little while was made lower than the angels, namely Jesus, crowned with glory and honor because of the suffering of death, so that by the grace of God he might taste death for everyone. - Hebrews 2:5-9 (ESV, emphasis mine)

The author of Hebrews directly applies this to Jesus, who was already described as being superior to angels in chapter 1, even "upholding the universe by the power of his word (v3)." Therefore while Jesus was made lower than the angels when He was a man, it was indeed only for a little while. For after His resurrection He was crowned with glory and honor and "sat down at the right hand of the Majesty on high, having become as much superior to angels as the name he has inherited is more excellent than theirs (v3-4)."

Note that the King James Version includes "Or, a little while inferior to" as an alternate reading for Hebrews 2:7 in the margin: 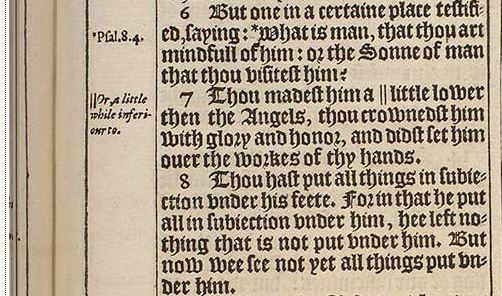 Additionally, the word translated "little" in Psalm 8:5 is מְעָט, which can also include a reference to time as can be seen in Psalm 37:10 (NJKV)

Of which John Gill brings out in his commentary on Psalm 8:5

The duration of this low estate was "a little while"; for so the Hebrew word מעט may be rendered, as it is in Psalm 37:10, and the Greek βραχυ τι, used by the Septuagint, and the author of the epistle to the Hebrews, as it is in Acts 5:34....

But to answer your question, it appears that BDAG has "lower in rank than the angels" based on it being a quote of Psalm 8:6 but notes immediately after that that the same construction is used in Isaiah 57:17 to refer a brief time:

Under the entry for PARA BDAG has:

So it appears to me that the grammar suggests "a little while lower than the angels" and many translate it that way but BDAG and other translators, reliant on the Hebrew text translates as "a little lower than". The translators do not agree for strong reasons. My own tendency would be to go with "briefly [lower in rank] than the angels" because I doubt that the author of To The Hebrews was familiar with the Hebrew. Honestly, it might even read "briefly among the angels" because without the Hebrew one has to supply the word "lower" which is not present in the text.

I don't pretend to resolve the matter but I hope I've shown the way that the awkward transmission from Hebrew to Greek has made the translation corrupt and this is evident in the various translations.

Only the Hebrew masoret, as verified by the qumran scrolls, is the legitimate text. All others that do not agree with it should correct themselves.

We need to read the plain and simple Hebrew the way it is written rather than dancing around the text, trying to translate or interpret away its raw and simple meaning.

Every place the phrase is found in the Bible, [מאלֹהים] is translated as "from G'd". Why translate this passage differently?

The plain and simple Hebrew:

מה אנוש
what is humankind

כי תזכרנו
that shall You think about us

ובן אדם
and son of man

כי תפקדנו
that shall You focus on us

ותחסרהו מעט
And then you lessen him a little

תעטרהו
shall you adorn him

This passage is related to Hosea 2:16.

ולא תקראי לי עוד
and shall you no longer call me

The latter rainד must align to the former rain

It is the latter rains that needs to align with and be biased by the leading/former rain, not the other way around.

The corollary to these passages

G'd wants to marry a bride who is smart, spontaneous and independent-minded. A bride who is able to make decisions on her own. If you don't agree, then you must be a misogynist because you prefer your wife to be dumb, submissive, unquestioning, without a mind of her own, fearful of you.

If you have the right and privilege to have a spouse who is smart, spontaneous and independent minded, why would you deprive G'd of such a spouse? Is G'd lesser than you, less privileged than you?

G'd wants His bride to be His equal. Regardless what the singularity theory says, it is not possible for the created to be more intelligent than the creator. So G'd has no choice but to settle for a human race that is just a little lesser, who is asymptotically His equal.

It might take us another 8 billion years, but in the Almighty's plan we will eventually be where He wants us, the human collective, to be.

So too, G'd throws at the human race, diseases, conflicts, catastrophes, famine, etc, to force us, to coagulate the human network to percolate us to higher collective intelligence and decisions.

is the only interface between Creator and creation. The only path of salvation.

For those who believe in that particular god Jesus, even your god is said to have said

Come unto me all who are heavily burdened, and I shall give you Sabbath.

If you are dynamics systems engineer, you would notice that quiescent or zero points are required and found in every system that needs to achieve stability. In information systems, in electronic circuitry, in chaotic systems, zero quiescent points are necessary for stability and synchronization.

The harshness and rigours of the forces of evolutionary development that G'd forces on humankind in His strategy to achieve a spouse equal to His stature, and then from which we need that hiding place in the Sabbath, a quiescent point independent of time and space.

The Sabbath is the only avenue to achieve salvation for humankind, such that even an atheist who observes Sabbath will have (though unknowingly) a relationship with G'd.

Responsibility of humankind to play-god

It is the expected responsibility for humankind to learn and come to grips that we have to play-god to the Universe, in our responsibility to achieve equality with G'd.

It is we the human collective who decides if killing unborn babies is acceptable. It is we who will decide if gay marriage, human cloning is acceptable. G'd has laid that responsibility on our shoulders.

It is our responsibility to create new life forms, to extend human life and to one day technologically achieve eternal life for the human race. Do not use the allegory of Babel to irrelevantly renege on this responsibility.

We are the co-creators of the Universe

[מלאכת] is the participative derivative of [מלאך], where [מלאך] has been erroneously translated with the pagan term "angel". In the original Hebrew of the Bible, there are no "angels", but only commissioners of tasks. [מלא] means "fulfill", to fill up - therefore, "my cup overflows".

[יכל] means completing not finishing. "Complete" as in a "complete" list of inventory.

G'd merely completes His task/commission without finishing creating the Universe. G'd merely made the material available and according to Qabalah tradition scattered that inventory. And we the human race will assemble the Universe to our own volition. There are near infinite, a dynamically-chaotic finite, number of possibilities how we humans will assemble this Universe. It is not a jigsaw puzzle because a jigsaw puzzle implies there is one and only one final outcome dictated by G'd. The outcome and finality of the Universe is determined by us the human collective.

7
To whom did God subject everything in Hebrews 2:8?
7
Do Peter and the author of Hebrews intend different meanings of ἀρχηγὸν?
9
Should the word elohim in Psalm 8:5 be translated into gods/angels/or god?
3
Does Hebrews 2:6 imply that man is a little lower than the angels?
3
What does "taste death" in Hebrews 2:9 mean?
2
Hebrews 2:9, What is the accurate translation of (ὅπως)=(ut)?
1
Hebrews 2:7 what is the meaning of "Thou madest him a little lower than angels"?
4
Did the angel forget about Jesus when he claimed that God is the only one to be worshipped in Revelation 22:9?
2
Hebrews 2:9-10; were Sufferings of Jesus for the aim of Perfection or for Substitutional Atonement or for both?