How was David's sin possible?

In the book of 2 Samuel, Chapter 11 we see David comitting a great sin which even God found unacceptable.

The sin is familiar to us. He saw Bathsheba bathing, had her brought to him, and lay with her who was another man's wife. I would like to know how this was actually possible.

Dr. Robert Chisolm, Jr., Professor of Old Testament, Dallas Theological Seminary, answered this VERY question in his article, “Cracks in the Foundation: Ominous Signs in the Davidic Narrative” (Bibliotheca Sacra, April-June 2016, pp. 154-176). That is, he addresses the moral aspects which led to the practical event of seeing Bathsheba from the roof of his palace.

The below summary captures the key points of this article. 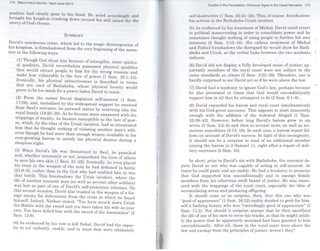 Your question seems to be "How is this possible?" as a question of total incredulity, that a godly man like David could fall into such a sin. I'll come back to this.

Your next question is, "Why would a woman bathe before the king's royal palace or somewhere a king could see her?" She may have assumed that since the army was out to war, as was her husband Uriah, that David would surely be out with them, and so she didn't draw the curtains or whatever she normally did for privacy. If she did know David was still at home, maybe she wanted to seduce him. The text doesn't answer your question of why she bathed on her rooftop. So only speculation is possible. By the way, even if Bathsheba did something to deliberately catch David's eye, she was included in the genealogy of Jesus [Matthew 1], which is significant in several ways.

The last question about David's initiative in seeing her is equally unanswerable. He certainly did take the initiative to have her brought to his palace after he saw her. But whether he brought out his binoculars or what have you in order to spy on her, no one can say.

The big question then is "how was this actually possible?" And I'm assuming you say this because David is known as "a man after God's own heart", and the "anointed king of Israel", etc. So if he was pleasing to God, how could he stumble so dramatically?

5But to him who does not work but believes on Him who justifies the ungodly, his faith is accounted for righteousness, 6just as David also describes the blessedness of the man to whom God imputes righteousness apart from works:

7“Blessed are those whose lawless deeds are forgiven, And whose sins are covered;

8Blessed is the man to whom the Lord shall not impute sin.”

As great and heroic and faithful as David was, he was a man who desperately needed God's mercy and help, and KNEW he needed God. Thus, he was a truly humble man before God. His plea was recorded in [Psalm 51:1-4]:

1Have mercy upon me, O God,
According to Your lovingkindness;
According to the multitude of Your tender mercies,
Blot out my transgressions.
2Wash me thoroughly from my iniquity,
And cleanse me from my sin.
3For I acknowledge my transgressions,
And my sin is always before me.
4Against You, You only, have I sinned,
And done this evil in Your sight—
That You may be found just when You speak,
And blameless when You judge.

God doesn't prevent anyone from committing sin. He didn't put an electric fence around the Tree of the Knowledge of God and Evil, as you or I might have done; so even sinless Adam and Eve sinned. God expects us to exercise our free will in obeying His laws. When we don't, sin happens, especially to the "best" of us.

17
Why was Abishag the Shunammite important?
18
To what extent is Psalm 51:4 poetic exaggeration?
3
In 2 Samuel did God cause Absalom to sin?
1
Is it possible that God did not actually kill David's son, whom he had gotten from the adulterous intercourse with Bathsheba?
2
A Question about King David
2
Confused about David's army
1
Does anything in the Hebrew text of Genesis 34:2-7 suggest that Shechem's actions against were less severe than Amnon's in2 Samuel 13:11-16?
0
Was Bathsheba a Hittite?
2
What was King David thinking in Psalm 51:12?