"Command ye Me"...What is the proper context and interpretation for Isaiah 45:11?

Isaiah 45:11 is rendered differently in many translations including:

I struggle with reconciling the context of the entire 45th chapter of Isaiah with the many diverse and somewhat ambiguous translations of this verse; particularly the ending.

Per the varying translations it is possible for one to surmise three entirely separate understandings of the text:

Any and all contextual correction is greatly appreciated.

The medieval scholar, Rabbi Shlomo Yitzchaki (“Rashi”) commented on this verse and noted the following. Please click in the text citation box below in order to view the source online at http://www.chabad.org 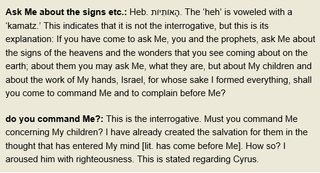 In this regard, Rashi would have had access to the relevant Targum, which had already existed eight centuries before Rashi. That is, the Targum provides insights as to how rabbinic scholars had understood the verse in earlier centuries prior to Rashi. The following comes from the Targum Jonathan to the Prophets, which had appeared as early as the Second Century.

The proposed translation of this Targum is as follows:

Thus says the Lord, the Holy One of Israel, even that I shall restore Israel for future events to come. Ask (masc., plural) before me! Concerning my people --even the work of my mighty power-- will you (masc., plural) instruct me?

The last portion of this verse in the Targum is a question, which is in keeping with the observations of Rashi and with the Mekhilta de-Rabbi Shimon bar Yohai.

The Mekhilta de-Rabbi Shimon bar Yohai is a collection of classical halakhic midrashic interpretation of the biblical Book of Exodus, and in this regard this resource is an indispensable source for understanding the history, beliefs, and practices of the earliest rabbis. The majority of the traditions preserved stem from the tannaitic period of early Rabbinic Judaism (approximately 70–200 C.E.), although a portion of its material dates to the beginning of the subsequent amoraic period (approximately 200–500 C.E.). The following citation (from Tractate Beshallạ, 23:1:23.B) contains a direct reference to Isaiah 45:11. 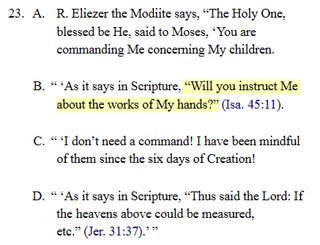 The rabbis had understood the citation of the verse in Isaiah as a rhetorical question by the Lord.

Finally, the second person verbs of Isaiah 45:11 are in the masculine plural, and so the readers are in view (and not Cyrus, who appears in verse 1 of the chapter). This arrangement of clauses and translation by the Targum in addition to the Mekhilta de-Rabbi Shimon bar Yohai all follow the syntactical structure of the verse in Hebrew as was later established by Masoretic scholars in the 9th and 10th Centuries.

Please note that the red box indicates that the last six words (ignoring the Maqqēphim of course) appear to fall into one logical grouping, which means that the very last word of the verse (the verb) takes as its object the preceding five words. Thus the proposed translation into English would appear as follows consistent with the Jewish sources already noted, above.

Thus says the Holy One of Israel, even his Creator. Ask (masc., plural) me concerning coming things! Concerning my sons --even the works of my hands-- will you (masc., plural) be instructing me?

In conclusion, the verbs in verse 11 are in the second person plural, and refer to the readers, who, as Rashi indicated, also included the prophets at the time of writing then.

In other words, the gist of the verse is as follows: The Lord is calling on the readers to discover his divine plan for the promised future of the Jewish peoples, whom he created.

So said the Lord, the Holy One of Israel, and his Creator, "Ask Me about the signs; concerning My children and the work of My hands do you command Me?

In this passage, the author ('Second Isaiah') does not portray God as talking to his followers, but to the Persian King Cyrus:

Isaiah 45:1: So said the Lord to His anointed one, to Cyrus, whose right hand I held, to flatten nations before him, and the loins of kings I will loosen, to open portals before him, and gates shall not be closed.

In the above extract, the author is expressing the gratitude of God for Cyrus having liberated the Jews. The first clause in verse 45 is then straightforward. God is telling Cyrus that he may ask God concerning his intentions. In the second clause, the author, and therefore God, recognises that Cyrus has authority over the Jews. Cyrus can issue commands for the Jews to follow, and it is a form of rhetoric for God to ask whether Cyrus will also command him.

The truth is That we cannot command God but put his word to him because is word can never turn to him. If u can study very well u will understand God was asking a question. Will u also command me? Just imagine a child forcing is father to do something it looks stupid but there re ways the child will put the father to work by telling his father u know u re my father it's ur duty to protect me the father will say yes. That is how were supposed to relate to God. U bring the word to him He will respond to u because that his word. Evangelist Joel T. Dima

Thank you so much for this exposition. If we agree that the clay can not dictate to the Potter what or how to fashion it, no one, indeed no mortal can command God. Therefore, "command ye me" is a rhetorical question. KJV as a version is difficult to understand sometimes.

Command ye Me”…What is the proper context and interpretation for Isaiah 45:11

In proper context and understanding we need to read from 45:9-13

9 “Woe to the one who quarrels with his Maker—An earthenware vessel among the vessels of earth! Will the clay say to the potter, ‘What are you doing?’ Or the thing you are making say, ‘He has no hands’ 10 “Woe to him who says to a father, ‘What are you begetting?’ Or to a woman, ‘To what are you giving birth?’”

Isaiah starts verse 9 “Woe to the one who quarrels with his Maker"Apparently the Israelites are complaining to their maker about something, and to show their stupidity, Isaiah compares them to earthenware vessels, that dare criticize their creator. And likewise in verse 10 compares them to little children criticizing their parents.

11 "Thus says the Lord, the Holy One of Israel, and its Maker Will you question me about my children, or command me concerning the work of my hands? 12 I made the earth, and created humankind upon it; it was my hands that stretched out the heavens, and I commanded all their host. 13 I have aroused Cyrus in righteousness, and I will make all his paths straight; he shall build my city and set my exiles free, not for price or reward,says the Lord of hosts."

In the above verses ,Isaiah stresses to the Israelites, that God as their creator has the right to decide about the future things and events to come, and that He is able to take care of his creation and his people. Isaiah continues in verse 13 and tells the Israelites, that He will raise Cyrus ,the Persian King, that will liberate his people and have the temple in Jerusalem rebuild. Cyrus sends the Israelites from Babylon home ,with the gold and silver vessels taken by the Babylonians. (Ezra 6:3-5)

An example of what the Lord is telling us in Is. 45:11 is given us when the disciples declare in Act 13:11 And now, behold, the hand of the Lord is upon thee, and thou shalt be blind, not seeing the sun for a season. And immediately there fell on him a mist and a darkness; and he went about seeking some to lead him by the hand. This is scripture interpreting scripture and in total harmony with Is. 45:11 where the Lord is explaining to us Israel (God’s habitation on the earth, us, His temple) Who is our maker (He made us soldiers of God to be His substitutes in the earth to represent Him in demonstration and power of His Spirit) commanding the deeds, acts of God in the earth to inflict punishment or aid as seen in the translation of Is. 45:11. We by the Spirit have this authority just as the disciples did, let me emphasize this is by the will of the Spirit not our fleshly whim so to speak. The Lord tells us to be strong in Him and the power of HIS MIGHT and as we are knit to Jesus in close relationship every day, moment by moment we will and do operate in the power of HIS SPIRIT!

19
Should the title in Isaiah 9 be translated?
2
What is the traditional understanding of God's Marriage Contract(Ketubah) with Israel?
8
To which portions(s) of Isaiah does John 12:41 relate the prophet's vision?
0
Possible reading of Isaiah 45:11b
0
Was Justin Martyr quoting Isaiah 65:20 in his Dialogue with Trypho? If yes from what Bible?
4
"I give" in Isaiah 43:3
1
Does Isaiah 44:6 present a contradiction with respect to the nature of God, the Father and his Son?
2
Who are the seven women of Isaiah 4:1