Does the following phrase εἰς τὸ ἐκείνου θέλημα refer to the will of God or the will of the devil?

To put it another way, do the pronouns αὐτός and ἐκεῖνος have the SAME antecedent, who is the devil? If so would the idea here be that one escapes the clutches of the devil by whose will the sinner had been captive, which is the view of the most popular and widely-read English translations of the Bible. However, is the meaning instead to escape from the devil according to will of God?

First, my own literal translation of this verse appears as follows.

and having come to their senses from the trap of the devil, having been held captive by him unto his will.

Please note that in this verse that the αὐτός and ἐκεῖνος again appear in tandem and both refer to two different antecedents in context (and therefore avoid confusion). In other words, the appearance of both Grek pronouns in the same close context appears to have been to avoid confusion in the mind of the listener (or reader) in that two DIFFERENT antecedents are in mind.

In the passage at hand, therefore, could the word αὐτός refer to the devil, and the ἐκεῖνος refer to God, who appears in the immediate context within the preceding verse?

25 In humility, correcting those who oppose -- lest at some time God should give them a change of heart regarding the knowledge of the truth -- 26 that they might return to clarity of mind from the entrapment of the Devil, having been taken alive by him into his will. 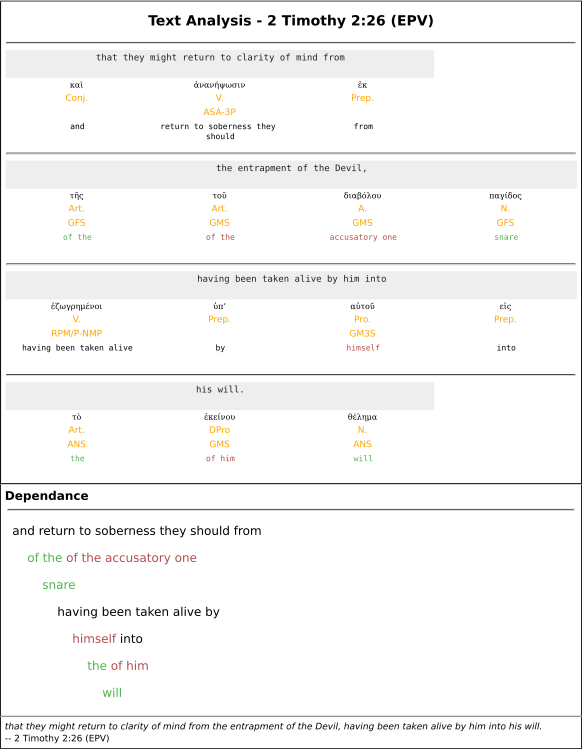 8 What's more, the manner in which Jannes and Jambres were opposed to Moses, so also are these men opposed to the truth -- men, having been corrupted, of reprobate mind concerning the faith. 9 But they will make no further progress than that, for their folly will be something manifest to all, just as that of those had become. 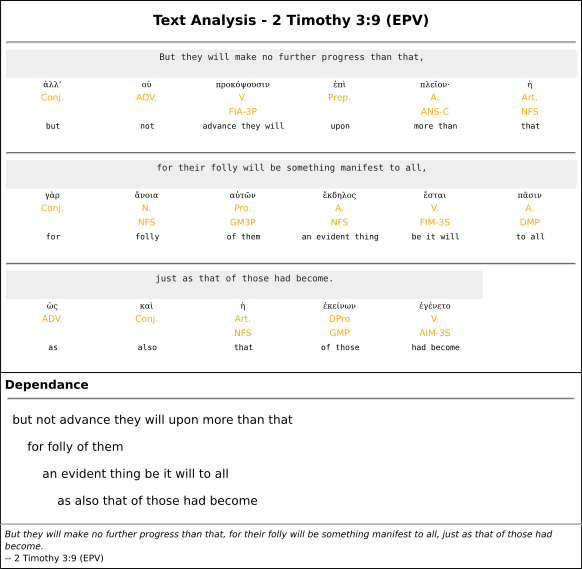 In 2 Timothy 3:9, the reason ἐκείνων is determined as a referent to an antecedent in the previous verse, is because of ἐγένετο. "had become", or "was" as you have given it, refers to the folly of Jannes and Jambres that had already been manifest to all, so the corresponding genitive pronoun must refer to them, not to the people Paul is immediately referring to, whose folly "will be something manifest to all".

There is nothing in 2 Timothy 2:6 that would compel one to look for an antecedent for ἐκείνου outside the immediate context. So, Paul is referring to the will of the Devil, not the will of God.

Not the answer you're looking for? Browse other questions tagged greek grammar or ask your own question.