In Daniel 10:13, is the angelic speaker himself left alone, or does he leave Michael?

While looking at interpretations of Daniel 10:13, I found something that seemed strange in the writings of Theodoret. In most modern translations, the verse reads something like this:

The prince of the kingdom of Persia withstood me twenty-one days, but Michael, one of the chief princes, came to help me, for I was left there with the kings of Persia [ESV]

But Theodoret understands it differently:

Theodoret's actual Greek is as follows (sorry I can't read this to pull out exactly the relevant parts): 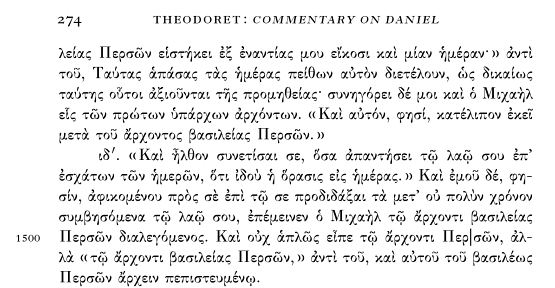 Originally I assumed that this was translation issue in the Septuagint, until I noticed that the NABRE interprets it the same way:

Adding to the confusion, the Orthodox Study Bible (reputedly a translation of the Septuagint) reads:

I think that your initial hypothesis about this being due to a difference between the Masoretic Text and the Septuagint is correct.

There appear to be two variants of this verse in the Septuagint. It's not clear to me the source of each, but both indicate καὶ αὐτὸν κατέλιπον - "and him I left".

Brenton's English translation (which is said to be based primarily on the Codex Vaticanus) agrees with the latter and reads:

It seems to me (whom am Orthodox) that the Orthodox Study Bible did not render the Septuagint correctly in this particular instance.

I can't explain the NABRE translation. At first, I thought that it might be that the Vulgate agreed with the Septuagint, but this is not the case:

But the prince of the kingdom of the Persians resisted me one and twenty days: and behold Michael, one of the chief princes, came to help me, and I remained there by the king of the Persians.

"`And the head of the kingdom of Persia is standing over-against me twenty and one days, and lo, Michael, first of the chief heads, hath come in to help me, and I have remained there near the kings of Persia;"

which would seem to indicate that Gabriel was giving the reason for his delay in returning to Daniel.

This agrees with the Interlinear which has -

"...came to help me and I remained there with the kings of Persia."

Not the answer you're looking for? Browse other questions tagged hebrew septuagint daniel or ask your own question.