What scripture is the author of 1 Tim 5:18 referencing?

Elders who provide effective leadership must be counted worthy of double honor, especially those who work hard in speaking and teaching. For the scripture says,

“Do not muzzle an ox while it is treading out the grain,”

“The worker deserves his pay.”

The comment of the Apostle Paul that “The worker deserves his pay” appears to have been the prevailing interpretation of this verse according to the oral traditions of the Jews during the First Century and beyond.

Jewish Antiquities, Book IV, 233.
“Do not muzzle the mouths of oxen when they thresh the ears of corn on the threshing-floor, for it is not right to bar from the fruit those who joined in the work and who have exerted themselves with regard to its production. (emphasis added)

The bolded text above was not part of the Hebrew Bible, but was instead the commentary and clarification of Josephus concerning the text. That is, Josephus understood the verse to mean the ox was comparable to human beings who participate and consume from the fruit of their labors.

Several hundred years later, the Babylonian Talmud appeared, which codified the oral traditions of the Jews. The following passage reflected the same interpretation found in Josephus, but with more clarification in that the consumption of the fruit of ones labors appears only permissible for those who were “full time” employees and therefore entitled to “fringe benefits.”

Please note the areas below highlighted in yellow, and please click on the text below to view the source (online). 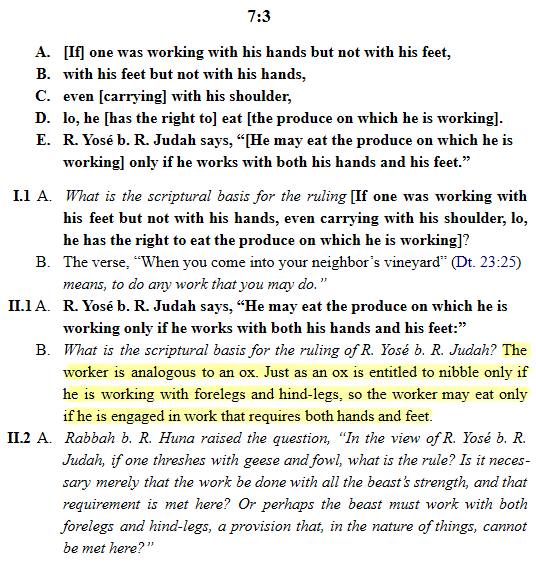 These reference the words of Jesus, found in Luke 10:7 (emphasis mine):

7 And remain in the same house, eating and drinking such things as they give, for the laborer is worthy of his wages. Do not go from house to house.

14 Therefore, beloved, looking forward to these things, be diligent to be found by Him in peace, without spot and blameless; 15 and consider that the longsuffering of our Lord is salvation—as also our beloved brother Paul, according to the wisdom given to him, has written to you, 16 as also in all his epistles, speaking in them of these things, in which are some things hard to understand, which untaught and unstable people twist to their own destruction, as they do also the rest of the Scriptures. - 2 Peter 3:14-16 (NKJV)

Adding to what other have said, seeing the application of a word can provide additional insight as to its Biblical meaning even if the word itself is not used.

The first worker was God:

The meaing of μισθοῦ can be wages or reward:

Rejoice, and be exceeding glad: for great is your reward (μισθὸς) in heaven: for so persecuted they the prophets which were before you. (Matthew 5:12 KJV)

If any man's work abide which he hath built thereupon, he shall receive a reward (μισθὸν). (1 Corinthians 3:14 KJV)

Therefore, even the Creator received a μισθὸν for His work:

Observing the Sabbath is a reminder that a worker deserves his μισθὸν and that all mankind can share in the same μισθὸν that the LORD God gave to Himself.

Not the answer you're looking for? Browse other questions tagged greek deuteronomy septuagint nt-use-of-hebrew-bible 1-timothy or ask your own question.