In Ezekiel 18:24 what kind of death does Ezekiel identify for the righteous who turn from righteousness? Is it spiritual, physical, or something else?

In Ezekiel 18:24, when the righteous turn from their righteousness, what kind of death will they experience? Is it physical, spiritual, or something else?

The type of life and death to which the prophet Ezekiel refers are physical, that is, prolonged life and premature death in this world (העולם הזה‎), rather than eternal life and punishment in the world to come (העולם הבא‎).

And if a man is just and does what is lawful and right...

What defined what is lawful and right during the time of the prophet Ezekiel? The Law of Moses.

The righteousness consists in the fulfilment of the commandments of the law: viz., (1) those relating to religious duties, such as the avoidance of idolatry, whether of the grosser kind, such as eating upon the mountains, i.e., observing sacrificial festivals, and therefore sacrificing to idols (cf. Deuteronomy 12:2.), or of a more refined description, e.g., lifting up the eyes to idols, to look to them, or make them the object of trust, and offer supplication to them (cf. Psalm 121:1; Deuteronomy 4:19), as Israel had done, and was doing still (cf. Ezekiel 6:13); and (2) those relating to moral obligations, such as the avoidance of adultery (compare Exodus 20:14; Leviticus 20:10; Deuteronomy 22:22; and for טמּא, Genesis 34:5), and of conjugal intercourse with a wife during menstruation, which was a defilement of the marriage relation (cf. Leviticus 18:19; Leviticus 20:18). All these sins were forbidden in the law on pain of death.

"He walks in My statutes, and He kept My judgments, to deal truly. He is just; he shall certainly live," said Yahveh God.

Therefore, by keeping and obeying the Torah, a man is deemed just1 and "he shall certainly live."

Therefore, you shall keep His statutes and His commandments that I command you this day, so that it may go well with you and with your children after you, and so that you may prolong your days upon the earth that Yahveh your God gives you, forever.

By keeping and obeying the Torah, their days on earth would be prolonged and they would reap the many physical blessings listed in the Torah. On the other hand, if they disobeyed the Torah, they would endure the many physical curses listed in the Torah. In addition, if they committed particular sins worthy of death (חֵטְא מָוֶת), they would suffer premature death at the hand of the Sanhedrin, which was responsible for judging the people of Israel on Yahveh's behalf.

The context indicated spiritual death. "The soul who sins shall die" (v.20).

The inclusion of the word "soul" (נֶפֶשׁ) does not dictate that the "life" and "death" to which the prophet Ezekiel refers is spiritual as opposed to physical. To demonstrate that this is not merely my novel interpretation, Keil and Delitzsch commented,

The soul that sinneth shall die. הנּפשׁ is used here, as in many other passages, for “man,” and מוּת is equivalent to suffering death as a punishment. “Death” is used to denote the complete destruction with which transgressors are threatened by the law, as in Deuteronomy 30:15 (compare Jeremiah 21:8; Proverbs 11:10).

Indeed, it is actually rare for the Hebrew word נֶפֶשׁ ("soul") to be used in the Old Testament in the metaphysical or spiritual sense. It is far more common for it to be used as a synecdoche of part for man himself.

In Figures of Speech Used in the Bible: Explained and Illustrated, p . 640, Ethelbert William Bullinger wrote, 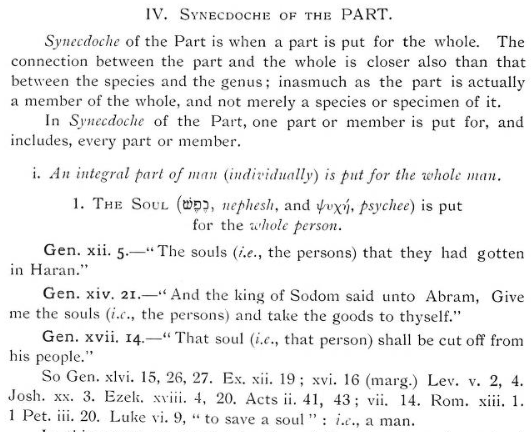 Thus, when it states that "the soul that sins shall die," it simply means "the man that sins shall die." The combination of the noun נֶפֶשׁ (H5315) and the verb חָטָא (H2398) occurs numerous other times in the Old Testament in contexts which clearly indicate that it is a man sinning, and not merely some spiritual component in man. In Num. 31:19, Moses writes, כֹּל הֹרֵג נֶפֶשׁ, that is, "whoever kills a soul." But, how can any man kill the metaphysical soul of another man?2 Rather, it simply means "whoever kills a human," as the context of Num. 31:17 clearly suggests.

This would give them "a new heart and a new spirit". Your uncontextual interpretation does not heed the warnings from God.

And you clearly see that when the prophet Ezekiel intends to refer to the spiritual aspect or component of man, he uses the word רוּחַ (rūaḥ), "spirit," but נֶפֶשׁ (nép̄eš) means no such thing in the book of Ezekiel.

2 According to the New Testament, only God can destroy (including kill) the soul within a man (cp. Matt. 10:28).

Not the answer you're looking for? Browse other questions tagged ezekiel sin death or ask your own question.

10
How should Ezekiel 3:19 be translated, "delivered your soul" or "saved your life"?
2
Where did ancient readers believe the bottomless pit to be located?