What is the earliest Genesis 1:1 [closed]

Ask Question
Asked 6 years, 8 months ago
Modified 11 months ago
Viewed 1k times
0
Closed. This question is off-topic. It is not currently accepting answers.

With the current Hebrew version of Genesis 1:1 the number Pi can be found within a gematria calculation. I am curious how far back it goes and if it exists in the earliest versions of Genesis 1:1 or if it has been changed at some point.

The link above has the Genesis 1:1 calculation for the text.

In the beginning God created the heaven and the earth.

If you check the link you can see it requires word for word and letter for letter precision to calculate Pi, so I am curious to know how far back it goes, and if earlier versions differed.

Where can I find the earliest versions of Genesis 1:1?

The consonantal text of Genesis 1:1 as quoted by OP is the only ancient Hebrew text known for this verse:

The oldest known manuscript of this famous text is from the Dead Sea Scrolls, 4Q7 = 4QGeng. Unfortunately it is a broken text, but there is sufficient visible (for the purposes of this question) to confirm that its text is the same as the familiar one known from the standard text of the Hebrew Bible:

Whether this is the oldest form of this Hebrew is a different question, however. Epigraphic Hebrew -- the "living" form of the language during the biblical period -- did not use internal "vowel letters" (consonants used to indicate vowels), although their use grew perceptibly from the 10th to 1st C BCE. Jeremy Hutton ("Orthography: Epigraphy", in Encyclopedia of Hebrew Language and Linguistics [Brill, 2015]) writes:

The representation of long, word-internal vowels was apparently a secondarily adapted feature which gained in frequency and regularity during the Persian and Hellenistic periods.

If the oldest form of the first verse of Genesis followed these orthographic conventions, then it would probably read:

That is, the first two occurrences of /y/ in the transliteration above would be missing (the "gap" noted by ^ below the line). (The last /y/ is consonantal.)

Such an orthography would, of course, render meaningless the calculation of π described by OP. I reiterate, though, that this is a hypothetical text, and not one that exists in any known manuscripts. And it is clear that the י in אלהים is present in 4QGeng, as would be expected by this date: 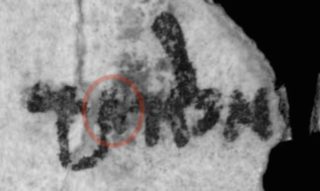 While the text itself has not changed, the method of gematria used with the text was changed by Judah the Patriarch in the 2nd Century CE when Merkabah was prohibited from discussion.1 The oldest gematria belongs to the Merkabah 2 and was extant at the time the Torah was written.3 It returns the following values for the first line of Genesis:

A fuller analysis of Genesis 1:1 with the gematria of the Merkabah can be found here.

Not the answer you're looking for? Browse other questions tagged genesis mathematics or ask your own question.

6
Does base-10 numbering in Genesis 4:24 argue against the Wiseman hypothesis?
3
While Ishmael & Esau were also fathers, they’re the only 2 we can’t determine the # of paternal years for
0
Did original Scripture say Noah was a "son" of 600 years when the water landed?
6
Earliest interpretation of Genesis 6:3 as referring to man's lifespan?
3
In Genesis 1:1 why בראשית instead of בראש?
1
Elohim at Genesis 1:1: subject or object?
1
How was the 20% tax enough to last all 7 years of famine?
4
What does the word 'naked' mean in Genesis 2:25 and Genesis 3:7, Genesis 3:10 and Genesis 3:11?