But you, O Bethlehem Ephrathah, who are too little to be among the clans of Judah, from you shall come forth for me one who is to be ruler in Israel, whose coming forth is from of old, from ancient days.—Micah 5:2 (ESV)

The next two verses seem like they also could apply to Jesus:

Therefore he shall give them up until the time when she who is in labor has given birth; then the rest of his brothers shall return to the people of Israel. And he shall stand and shepherd his flock in the strength of the Lord, in the majesty of the name of the Lord his God. And they shall dwell secure, for now he shall be great to the ends of the earth.—Micah 5:3-4 (ESV)

And he shall be their peace. When the Assyrian comes into our land and treads in our palaces, then we will raise against him seven shepherds and eight princes of men; they shall shepherd the land of Assyria with the sword, and the land of Nimrod at its entrances; and he shall deliver us from the Assyrian when he comes into our land and treads within our border.—Micah 5:5-6 (ESV)

Is this in reference to Jesus? If so, are verses 5 and 6 about the second coming? Or are they referring to something else?

And he shall be their peace. When the Assyrian comes into our land and treads in our palaces, then we will raise against him seven shepherds and eight princes of men; they shall shepherd the land of Assyria with the sword, and the land of Nimrod at its entrances; and he shall deliver us from the Assyrian when he comes into our land and treads within our border.

The first thing that jumps out to me is that Assyria fell 605 BC to Babylon and again in 330 BC to Alexander the Great. To this day, there exists an Assyrian culture, but the ancient empire never fully recovered and certainly wasn't a threat to Israel or her occupier. By the time of Christ when, according to Matthew the chief priests and scribes interpreted Micah 5:2 to be an as-yet-unfulfilled prophecy, Micah 5:5-6 had already been accomplished! (For our purposes, whether Micah 5 was written around 750-700 BCE or in the early 5th century BCE doesn't matter.) So Jewish hermeneutics (at least as represented by Christian sources at the time) weren't especially concerned with interpreting the entire text consistently.

The "seven shepherds" could conceivably refer to the Neo-Babylonian dynasty (either prophetically or retroactively) of seven rulers. More likely, it's a reference to the Ushpizin: Abraham, Isaac, Jacob, Moses, Aaron, Joseph and David. (It would help to know if that particular tradition of Sukkot (the Feast of Tabernacles) is ancient enough to be the meaning here.) The second reading suggests that the "eight princes of men" are either the Neo-Babylonian and early Achaemenid kings, Jewish governors under them, or just a generally-hoped-for group of military leaders.

This passage in Micah seems likely to be what Herod's "chief priests and scribes" are paraphrasing in Matthew 2:

4and assembling all the chief priests and scribes of the people, he inquired of them where the Christ was to be born. 5They told him, "In Bethlehem of Judea, for so it is written by the prophet:
6 "'And you, O Bethlehem, in the land of Judah,
are by no means least among the rulers of Judah;
for from you shall come a ruler
who will shepherd my people Israel.'"   ESV

Although Micah himself would not have seen this clearly:

10Concerning this salvation, the prophets who prophesied about the grace that was to be yours searched and inquired carefully, 11inquiring what person or time the Spirit of Christ in them was indicating when he predicted the sufferings of Christ and the subsequent glories. 12 It was revealed to them that they were serving not themselves but you, in the things that have now been announced to you through those who preached the good news to you by the Holy Spirit sent from heaven, things into which angels long to look.   1 Peter 1:10-12 ESV

The deliverance in Micah 5:5-6 in the first instance refers to the Assyrians threatening Judah around the time of Micah. By the same logic, the ruler from Bethlehem also probably referred to a contemporary of Micah in the first instance, but in both cases, there is a messianic fulfilment intended in the passage itself, inferred from the loftiness of the language. This 'double fulfilment' is a common feature of prophecy on both OT and NT.

As for whether the passage prophesied the first or second coming of the Christ, the OT prophets had little or no concept of the events being separate. From their perspective they could only see one event - this is often illustrated with an analogy of someone looking at two mountains in the distance: he can see the peaks, but from where he is standing they just look like one mountain - you have to climb the first to see the valley between them.

As referenced in both Matthew and John, it is a reference to events surrounding Jesus' birth and Jesus himself:

"'And you, O Bethlehem, in the land of Judah, are by no means least among the rulers of Judah; for from you shall come a ruler who will shepherd my people Israel.'"

Has not the Scripture said that the Christ comes from the offspring of David, and comes from Bethlehem, the village where David was?

The prophet is saying that from the city of David, Bethlehem, the house of bread, which was nothing but a few women and children, the promised ruler of Israel would arise. Notice the military context:

1a Now muster your troops, O daughterb of troops; siege is laid against us; with a rod they strike the judge of Israel on the cheek. 2c But you, O Bethlehem Ephrathah, who are too little [insignificant] to be among the clans [armies] of Judah, from you shall come forth for me one who is to be ruler in Israel, whose coming forth is from of old, from ancient days.

The word is commonly used of soldiers going forth to battle (or David battling a lion): 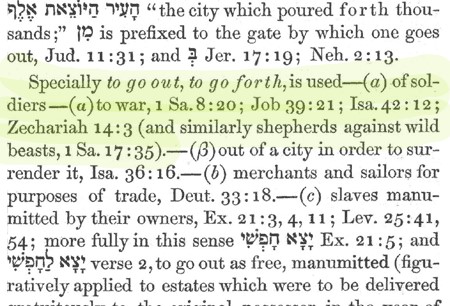 This should probably also be considered an allusion to this very similar verbiage:

[Jdg 6:14-16 NLT] (14) Then the LORD turned to him and said, "Go with the strength you have, and rescue Israel from the Midianites. I am sending you!" (15) "But Lord," Gideon replied, "how can I rescue Israel? My clan is the weakest in the whole tribe of Manasseh, and I am the least in my entire family!" (16) The LORD said to him, "I will be with you. And you will destroy the Midianites as if you were fighting against one man."

"whose coming forth..." is apparently taken by the ESV to refer to his birth in Bethlehem. However, (and I'm no Hebrew guru) the word is plural and is rendered in other translations as "whose comings forth" (IE: given the context, "sorties" or "military campaigns").

Interestingly the LXX has the plural of ἔξοδος, which normally refers to one's departure from life (IE: death).

Now, if I'm correct concerning this then this would be, I believe in a notional sense, similar to this:

NIV Revelation 13:8 All inhabitants of the earth will worship the beast--all whose names have not been written in the Lamb's book of life, the Lamb who was slain from the creation of the world.

But most important, I believe is the concern in the original question that perhaps the form of one usage of OLAM might tell us the meaning of a similar use. However, that isn't necessarily the case. Context is always the key factor.

NET Bible Micah 5:2 As for you, Bethlehem Ephrathah, seemingly insignificant among the clans of Judah--from you a king will emerge who will rule over Israel on my behalf, one whose origins are in the distant past.

That's about all I think we can load OLAM with in actual usage.

And if his military campaigns from OLAM then we must not imagine that his first battle was in eternity past. Surely there was no war on day one!

The point is that the exploits of the Messiah have been in the scriptures from long ago and in God's mind longer than that. To that agree all the scriptures.

It turns out that Zechariah prophesied that it in the eschatological victory of Israel and Judah it was appropriate to have the lesser tribes get the glory on this one, and the weakest will be as King David:

[Zec 12:7-8 NLT] (7) "The LORD will give victory to the rest of Judah first, before Jerusalem, so that the people of Jerusalem and the royal line of David will not have greater honor than the rest of Judah. (8) On that day the LORD will defend the people of Jerusalem; the weakest among them will be as mighty as King David! And the royal descendants will be like God, like the angel of the LORD who goes before them!

I believe you are seeing a natural progression of events. First, the chief shepherd Messiah is born in Bethlehem (v. 2). Second, seven shepherds are appointed to rule the land of Nimrod. That would include most of modern Turkey and Iraq (v. 5). Third, the remnant of Jacob is saved to bring both a blessing (dew from heaven) and judgment as the lion (vv. 8-9). The armies of God grow from one to seven to a remnant and collectively they put down all rebellion against YHVH.

John identified the seven shepherds in Revelation. They are the seven angels (aggalos can also be men) of the seven churches. Christ already said the overcomers from those churches would rule "with an iron rod" (Rev 2.27). The seven churches were located at the western gate of the Assyrian Empire.

The Assyrians were the enemies of God's people and the seven shepherds will remove that threat so there can be peace during the millennium rule.

Not the answer you're looking for? Browse other questions tagged matthew micah or ask your own question.