16 "For God so loved the world that he gave his one and only Son, that whoever believes in him shall not perish but have eternal life." (John 3:16, NIV)

But, in Psalm 11:5, it says that God hates some people

5 The LORD examines the righteous, but the wicked and those who love violence his soul hates. (Psalm 11:5, NIV)

How can this be resolved?

The Lord tests the righteousness for sin, which he (the Lord) hates. That is, the wickedness of the righteous is in view according to Rabbi Shlomo Yitzchaki (Rashi). Please click the image below in order to enlarge.

In this precise regard, the following graph depicts both the musical and logical division of phrases in the Masoretic Text. Please click the image below in order to enlarge. 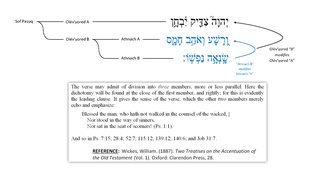 The division of phrases is how Jewish scholars (as early as the tenth century) had understood the text based on their own centuries-old learning and oral tradition. Each phrase cascades "back" into previous phrases based on the division of cantillation. The following graph depicts the same graph translated into English (NASB).

According to Wickes (1887) this dichotomy in the Psalms would be an example of antithetic parallelism. Consistent with comments from Rashi already noted, the arrangement of cantillation in this verse would suggest that the righteous are tested as over against the wicked who love violence that the Lord hates.

For example, when King David received his direct covenant promises for permanent occupation of the throne of Israel (2 Sam 7) he committed adultery and then murder (2 Sam 11). "Righteous" King David committed the very wickedness and violence which the Lord hated, but for which David later repented.

In summary, the idea here is not that the Lord hates the wicked who love violence. Instead, the arrangement of cantillation suggests that the Lord tests the righteous, who may commit wickedness and violence, which the Lord hates. Thus it is not the sinner who is wicked and who commits violence whom the Lord hates, but those who are not righteous. That is, the righteous are sinners who may still commit wickedness and violence; but the wicked who love violence are not righteous. This nuance of contrast is the verse's antithetic parallel.

The Bible plainly teaches in Psalms 5:5 and 11:5 that God hates the sinner. How is this to be reconciled with John 3:16 and other similar passages? It can be reconciled by understanding that God, as Christ, died for the elect. Whosoever believeth on Christ will not perish because they have been given eternal life. But our faith cannot save us---salvation is not of works, lest any should boast (Ephesians 2:8-9). Salvation is 100% due to the mercy of God.

The elect---those for whom Christ has died---are the beloved of God. They are beloved because their sins have been paid for, and they are pure in the sight of God. Psalm 5:5 is referring to those whose sins were not paid for, so they remain under the hatred of God.

This statement is contrary to what many believe and teach. Many believe that God loves everyone, and salvation is available to all. But this idea is wholly contrary to many passages in the Bible, including much of Ephesians 1, which speaks of God's election program.

In John 3:16 the word translated "loved" is in the aorist indicating the act of giving was an exceptional act of love, not that he always loves (which would be a gnomic present).

Also, as I read it, "the world" in the 4th canonical gospel ("John") does not mean everything and everybody but rather refers to the Jewish theocracy of the time.

Psalms is part if the Old Testament, while John is in the New Testament. A simple answer to the contradiction is that the testaments disagree.

"God is Light and there is no darkness in Him at all" (1 John 1:5), and this "Light" means also love, for the best - yet not exhaustive - description of God's nature is love (1 John 4:8), and He not only loves so to say intentionally, as humans do, but cannot help loving due to the "compulsion" of His eternal nature that is best described as love. "Poor" He! - He cannot escape from this compulsion of His own nature, and even if the worst of the sinners, Satan even, sin against Him, He cannot but answer with a compassion and mercy, for sin makes every sinner miserable and poor, devoid of divine grace, and such a man or angel deserves nothing but a pity and compassion. Even great saints, who were humans, understood this, and for example, St. Isaac of Ninev, although the Church catechism forbade him to do so, still couldn't help praying also for the fallen angels, just because he pitied their eternal misery which pricked his heart. How much more so God, who is the Principle from whom we all have the glimpses of love and compassion, He being the infinite sea of those?!

Thus, as to "hate" of God, this also should be explained in this light of God, who is the Light with not taint of darkness, I have written this in a message above, just repeat here:

The question posited by you seems to be a rhetorical one, for of course, if He loves all world that totally excludes Him hating anybody. When in the Holy Scripture the term "hate" applies to God, it is in a divine, metaphorical sense and not human sense. Thus, if God hates Pharaoh or Saul, in fact He hates not the Pharaoh's or Saul's person, which are in His image, but their sins, which He wants to consume in the fire of His grace and love. This is the meaning of the metaphor of the burning bush in "Exodus" where fire envelopes and burns the bush without damaging and scorching it: God burns our sins without burning/destroying our persons, but rather in order to cleanse our persons and deify us. Thus, He hates "us", indeed! - in the meaning that he hates our sins, wants to burn them out of love toward us in the fire of his divinity and make us eternal heirs of His and His Son's Kingdom.

Psalms 11:5 and John 3:16 are contradictions. God doesn't love the whole world. In the Old Testament God himself says he hated Esau. Presumably all Edomites, not just Esau the brother of Jacob.

Malachi 1:3 (KJV) 3 And I hated Esau, and laid his mountains and his heritage waste for the dragons of the wilderness.

The verse is mentioned again by Paul. So we can say that Paul also knew that God didn't love the whole world.

Not the answer you're looking for? Browse other questions tagged john contradiction psalms attributes-of-god or ask your own question.