I'm struggling to understand this passage:

The ESV translation highlights the language a bit better here I feel [I did restructure the second section slightly]: 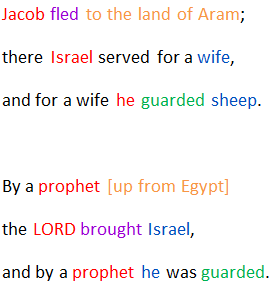 In the first we see Jacob moving out, working for his bride and then guarding her (by guarding sheep). In the next we see God moving in to do the work of bringing Israel out of Egypt, securing Israel as his bride, and then guarding him (Israel is actually also being compared to the sheep that Jacob guarded).

The difference, and possibly why it says prophet instead of naming Moses, is that it is Jacob doing it in the first, but it is God doing it to Jacob in the second, just through the agency of a prophet.

In both cases of prophet it is referring to Moses. So we could insert "Moses" but we would be making the mistake the author intended to avoid. The emphasis is that it is God doing it.

In the first case of Israel it is Jacob, but in the second it is the nation. The writer is using Jacob in the first to distinguish he is speaking of just the man, but uses the name Israel in the middle line of both stanzas to highlight it's double meaning.

There are a lot of beautiful subtle meanings at work here as well. The man going out and God bringing in. Israel as a bride and needing to be shepherded as sheep.

As for how this fits in the larger context of Hosea, it is Ephraim who is going out to Assyria to "work" for her sins, but it is God who will bring her back in.

Hosea 9:3 ESV They shall not remain in the land of the LORD,
but Ephraim shall return to Egypt, and they shall eat unclean food in Assyria.

So in it's prophetic meaning one could argue from a Christian perspective that the prophet is actually Christ, who Moses was a foretype of, who will bring his bride back from exile into the promised land.

5 They shall not return to the land of Egypt,
but Assyria shall be their king, because they have refused to return to me.

11 they shall come trembling like birds from Egypt,
and like doves from the land of Assyria,
and I will return them to their homes, declares the LORD.

Hosea is a particularly difficult book to understand. It is clear that Hosea was prophesying after the fall of Israel in 722 BCE - for example, Hosea mentions the Assyrian conquest:

Hosea 8:8-9: Israel is swallowed up: now shall they be among the Gentiles as a vessel wherein is no pleasure. For they are gone up to Assyria, a wild ass alone by himself: Ephraim hath hired lovers.

In his book, Hosea is that writing to the Judahites, warning them that the same fate could befall their nation. But for whatever reason, he is circumspect in comparing the fate of Judah directly with that of Israel.

And Jacob fled into the country of Syria

Of course, Jacob means Israel, and can mean either the legendary patriarch or the nation of Israel, but here it means the nation. Israel had joined with Aram (Syria) in an alliance against Judah, resulting in Judah calling on Assyria for assistance - the reason for the Assyrian conquest of Israel. We can understand some anger against Israel, the pejorative description of Israel as Aram's 'wife' and the put-down of "keeping sheep for the wife". Moses was the prophet by whom the Lord brought Israel out of Egypt, and perhaps the prophet by whom 'he' (the nation) was preserved.

Verse 1:1, which has some chronological difficulties, says that he prophesied during the reign of Jeroboam II of Israel and therefore before the fall of Israel, but Robert P. Carroll says in 'Prophecy and society', published in The World of Ancient Israel, page 205, that the secondary nature of the colophons introducing the individual prophetic books is widely recognised by scholars.

Not the answer you're looking for? Browse other questions tagged hosea israel typology or ask your own question.