What sort of phrasing is “the many” in Romans 5?

Most English translations have something in Romans that is an interesting turn of phrase—at least to my ears it instinctively makes sense but at the same time it in more at home in a carefully worded thesis than a casual conversation. Following the references works for me in English, but I'm having trouble explaining the thought progression in Turkish. Judging from the assortment of translations it seems I'm not the first to struggle. Unfortunately words for concepts involving relative numbers their implications are not easy to pin down.

A couple verses later the ESV translators seem to link back to specific amounts. Or at least that's what the definite article sounds like here:

This raises a couple questions.

If we could see Paul talking with his hands describing the scene, what sort of gestures would he be using? What are the linguistic clues that tell us which group is referenced when and how specific are the relative sizes?

All four instances of the adjective πολύς in v.15 and 19 that are used substantively to refer to "the many" people are articular masculine plural forms, three being nominative case (οἱ πολλοὶ), with the second articular version in v.15 an accusative case (τοὺς πολλοὺς) as the object of the prepositoin εἰς ("to").

Two instances of the anarthrous dative singular neuter are found in v.15 and v.17 as part of the comparison constructions there (πολλῷ μᾶλλον; "much more"), working as adjectives adding the descriptive emphasis of "much" to μᾶλλον's "more."

A final instance in v.17 is an anarthrous πολλῶν μᾶλλον (genitive plural; neuter here, since it is paired with the neuter noun παραπτωμάτων, "trespasses"). It is functioning to describe the extent of the trespasses.

First, the articular versions are all being used to contrast a group of people with the "one" (εἷς is found in the genitive singular ἑνὸς, "of one," a total of 12 times, 11 of those in v.15-19 and once back in v.12). The "one" man, whether Adam or Christ, or that man's "one" particular work, trespass or righteous act (v.18; referring back to Christ's death noted in v.6, 8, 10) are being referenced by each use.

Second, the articular versions are specifically being used where they are in juxtaposition to the references to "all" (πάντας, accusative plural of πᾶς; v.12, 18 [x2]). That is, none of the "many" are equal to "all."

Discussion of Your Specific Points

So here is how it works out that Christ's effect is "much more" than Adam's:

"The many" allows an indistinct number between the "one" and the "all" found elsewhere in verses 12-19. The "much more" does not expand the number of people, but rather the greater effect (both reversing and improving) by the work of the "one" man Christ over the "one" man Adam.

In this verse the Greek adjective, given as Strong's G4183, occurs in three different forms.

A couple of verses back in Romans 5:12, Paul uses "pantas" (Strong's G3946) to refer to ALL men - each and every one of them - however, he needed something different here.

The following graph attempts to illustrate the meaning of "the many" in Romans Chapter 5. Please note the yellow highlighted areas, which correspond to the four instances where the phrase "the many" occurs in Romans 5 (NASB translation). Please note how the Apostle Paul juxtaposes Adam with Christ Jesus, and flip-flops the causes-and-effects of obedience versus disobedience.

Please click the image in order to enlarge for better viewing. 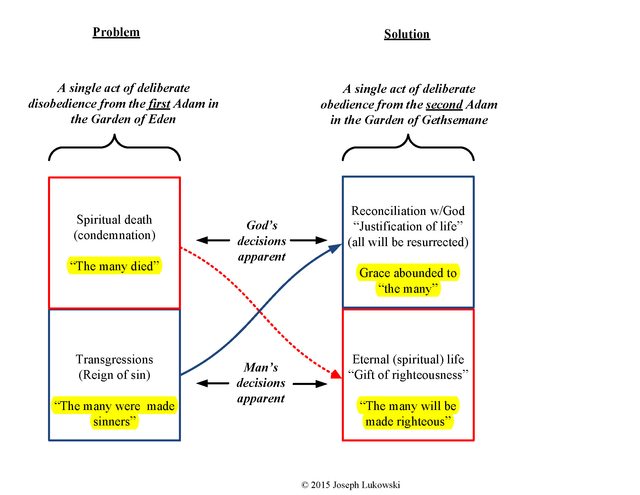 In Romans 5, the Apostle Paul juxtaposes Adam with Christ Jesus, and flip-flops the causes-and-effects of obedience versus disobedience. That is, the first Adam disobeyed God in the Garden of Eden, while the second Adam later obeyed God in the Garden of Gethsemane (i.e., Jesus had said, "not my will, but your will be done," and so rather than let the cup pass from him, he had accepted the will of his father).

In this regard, the disobedient first Adam had already catapulted the entire human race into spiritual separation from God through his disobedience. All human beings ("the many") are thus born into the state of spiritual death (top left-hand box in the graph). This spiritual death made "the many" to be sinners or transgressors against God (bottom left-hand box in the graph). That is, all human beings commit transgressions as individual acts of disobedience.

Before continuing, one note is necessary -- the key difference between both figures here was that the one man (first Adam) was a living soul (1 Cor 15:45) and the other man (second Adam) was a life-giving spirit, who existed as eternal life (1 Cor 15:45). This difference helps to understand how each man, respectively, affects "the many."

In this respect, then, those who believe in Jesus Christ are not only forgiven of their sins, but they are "born again," because while they once were dead spiritually (as unbelievers), they are now made alive anew with eternal life (Jn 3:5-7). That is, the sinner receives righteousness through faith, which results in the free gift of eternal life -- thus "the many" are made righteous (please see the bottom right-hand box in the graph). This does not mean that believers become sinless people, but that they do not "practice" unrighteousness (1 Jn 2:29; 1 Jn 3:10; Rev 22:11; inter alia). As biological descendants of the first Adam, believers still exist in bodies descended from the first Adam while on this earth.

Again, the sins of the ENTIRE world were condemned and nailed to the cross (Col 2:14). In another place, the Apostle Paul wrote that Christ Jesus gave Himself as a ransom "for all" (1 Tim 2:6). Another passage indicates that the desire of "God our Savior" is that "all men" be saved (1 Tim 2:4 and 2 Pet 3:9). The Apostle John says that Christ Jesus died "for the sins of the whole world, and not just for the sins of believers" (paraphrase of 1 Jn 2:2). Finally, the writer of the Book of Hebrews indicates that Christ Jesus tasted death "for everyone" (Heb 2:9). These passages indicate that all peoples are eligible to hear the good news of the gospel message because their sins were atoned for at the cross. If they do not receive the free gift of eternal life available through the gospel message, however, they will not have the righteousness to escape the last judgment.

Thus the "justification of life" to "the many" (please see top right-hand box) means that all human beings are promised resurrection. In this regard, at the last judgment it is not the "books of sins" that are not opened, but the "books of (dead) works." In other words, sins are not the basis of the indictment at the last judgment, but the spiritual death, which was the source of dead works, which includes self-righteousness -- that is, without righteousness and eternal life through Jesus Christ, the Lake of Fire is the destiny of the unsaved, whose names are not found in the Book of Life (Rev 20:14). The reason this judgment is called "the second death" is because these persons receive resurrected bodies (because their sins were atoned at the cross). However, what lacks at the last judgment is their eternal life, which would have come through righteousness by faith. Thus these persons suffer "the second death" when thrown into the eternal Lake of Fire forever.

Rom. 5:12 "...through one man sin entered into the world, and death through sin, and so death spread to ALL men, because ALL sinned" [emph. added]

Aren't ALL and MANY being presented as equal in these two verses?

Rom. 5:19 "For as through the one man's disobedience the MANY were made sinners, even so through the obedience of the One MANY will be made righteous."

Again: Aren't ALL and the MANY being presented as equal in these two verses?

That is, since Paul is using an ongoing series of contrasts and equalities, I see MANY and ALL as equal throughout.

Not the answer you're looking for? Browse other questions tagged greek romans authorial-intent or ask your own question.