Could Philippians 4:3 refer to Paul's wife?

Yes, I ask you also, true companion, help these women, who have labored side by side with me in the gospel together with Clement and the rest of my fellow workers, whose names are in the book of life. (ESV)

The word σύζυγε is rendered as "companion" or a synonym by almost all modern translations (a few take it as a name). However, Origen, who I believe was a native speaker of Greek took it to mean "wife".

Paul, then, if certain traditions are true, was called while in possession of a wife, concerning whom he writes in Philippians "I ask you also, my loyal mate, help these women." (Commentary on Romans, Book 1, Ch 1)

Clement of Alexandria also talks about Paul having a wife, and BDAG suggests he is thinking of Phil 4:3. But as Susan points out, others feel Clement was referring to 1 Corinthians 9.

Assuming σύζυγε is a common noun (technically an adjective), how plausible is Origen's interpretation grammatically? I know Paul more-or-less says he is single in 1 Corinthians 7:7, and argues that being single is the superior state, which obviously counts against interpreting Philippians 4:3 as referring to a wife. But, it does not completely rule out that Paul was married by the time he wrote Philippians 3-5 years later. Thus, I would prefer an answer based primarily on the grammar and immediate context.

The Greek text of Phil. 4:3 according to the Textus Receptus states,

The Greek word σύζυγε is declined in vocative case, either the feminine or masculine gender, and singular number, from the lemma σύζυγος, an adjective functioning substantively in this particular context.

Regarding the declension σύζυγε, Lexigram states,

According to BDAG (which specifically addresses the question at hand),1 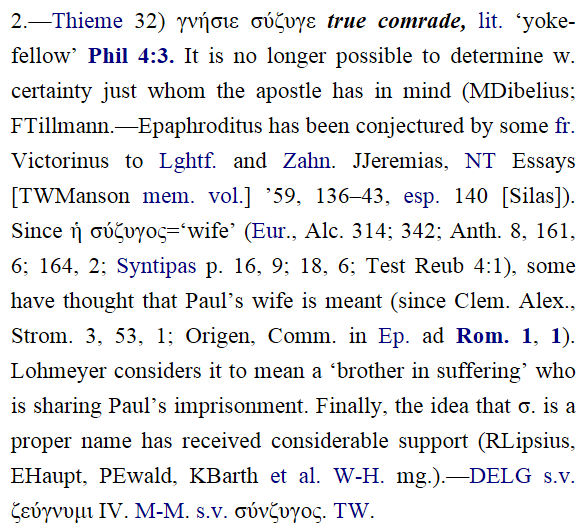 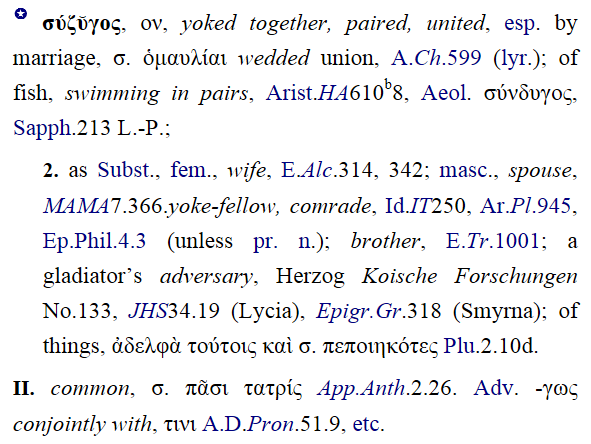 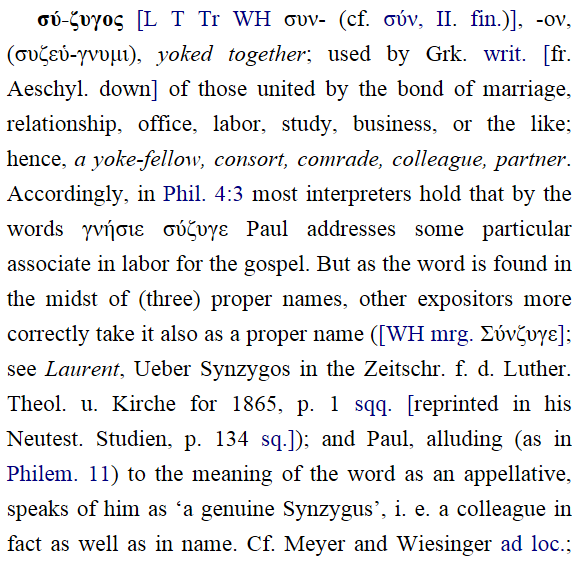 The adjective σύζυγος is related to the verb συζεύγνυμι, which means “to be yoked together.” This verb occurs twice in the Greek New Testament, and in both instances, it refers to being married.

6 so that they are no longer two, but one flesh. Therefore, what God has yoked together, let no man separate!

The Lord Jesus Christ is referring back to the marriage of Adam and Eve.4 Accordingly, one who is σύζυγος, “yoked together,” would be one’s spouse. On the other hand, as the lexicons clearly state, the word does not only possess the meaning of “spouse.” Furthermore, the apostle Paul clearly implies in his first epistle to the Corinthians that he was unmarried.5

As for the claim that the apostle Paul is referring to someone’s name, I hesitate to accept this claim since he modifies σύζυγε by the adjective γνήσιε, which he does nowhere else before a name.6 On the other hand, he does modify names by other adjectives elsewhere,7 which therefore leaves the possibility.

In his commentary on Phil. 4:13, Heinrich August Wilhelm Meyer wrote,9

If the apostle Paul would have modified σύζυγε by γνησία, which is declined in the feminine gender (whether vocative or nominative), then there would have been a basis for the assertion that σύζυγε is referring to a wife.

Contrary to my assertion that σύζυγε is not referring to a name, Meyer also writes,10

In summary, σύζυγε by itself can mean “wife,” or even “husband.” Only an associated adjective or the definite article when the word is not declined in the vocative case could clue the reader in on whether it’s referring to a male or female! However, because the apostle Paul modifies σύζυγε by the masculine-gender adjective γνήσιε, the word σύζυγε in Phil. 4:13 is understood to be declined in the masculine gender and could not therefore be interpreted as referring to the apostle Paul’s wife. It could however be a proper name, but ultimately, the matter remains unsettled.

It is correct to say that σύζυγος (literally “yoke-mate, one of a pair”) can be masculine or feminine, and that it is very often used to mean “wife” in classical and post-classical Greek. But in this passage it is modified by the adjective γνήσιε, which is unmistakeably masculine singular vocative. Thus, “wife” is not possible here.

Anyway, as you point out, in 1 Cor. 7:8 Paul does say very clearly that he is not married, and that he considers it better for all to remain unmarried “like me”. Are we to believe that Paul changed his attitude towards marriage between writing 1 Cor. and Phil.?

Since when did he retract:

Now to the unmarried and the widows I say that it is good for them to remain [as such], [just] as myself. If, however, they cannot control themselves they ought [indeed] to marry; for it is better to marry than to burn*.

Are we to entertain that St. Paul either went against his own advice, or couldn't control his passions?

* with passion? in Hell?

Not the answer you're looking for? Browse other questions tagged greek word-study philippians hapax-legomenon patristics or ask your own question.