Where is the Wilderness of Sin and what is its significance

I am after a hermeneutic explanation of where or what the Wilderness of Sin was, and what its significance was.

And they came to Elim, where were twelve wells of water, and threescore and ten palm trees: and they encamped there by the waters. And they took their journey from Elim, and all the congregation of the children of Israel came unto the wilderness of Sin, which is between Elim and Sinai, on the fifteenth day of the second month after their departing out of the land of Egypt.

The wilderness of Sin is between Elim and Sinai. The word given as "Sin" is Ciyn (Strong's H5512), which has no connection to the "cause of transgression". 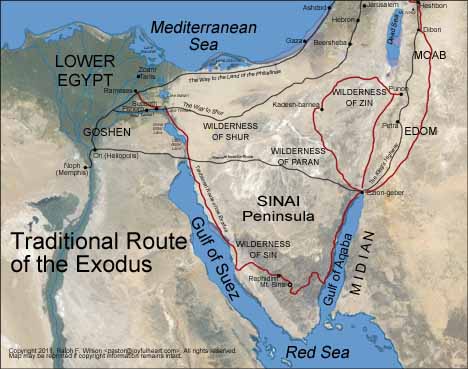 It was at the outskirts of the Wilderness of Sin that Israel murmured against the Lord, and during the days of their sojourn there that He provided them quail and manna.

For our purposes, whether or not we regard the two passages in which the Israelites complain and are satisfied as interpolations, they can be removed without otherwise affecting the context, resulting in:

Exodus 16:1: And they took their journey from Elim, and all the congregation of the children of Israel came unto the wilderness of Sin, which is between Elim and Sinai, on the fifteenth day of the second month after their departing out of the land of Egypt.

Exodus 17:1a,8: And all the congregation of the children of Israel journeyed from the wilderness of Sin, after their journeys, according to the commandment of the LORD, and pitched in Rephidim ... Then came Amalek, and fought with Israel in Rephidim.

The war against the Amalek commences after the Israelites leave the Wilderness of Sin and is only be conducted by day, "until the going down of the sun". Surprisingly, the Israelites can only succeed while Moses holds his hand high, supported on a pile of stones. As the name "Rephidim" (Hebrew: רְפִידִם‎) may mean 'supports', it is probably not a real location but an allegory. This then leads to the conclusion the the Wilderness of Sin could similarly be an allegory, rather than a real location.

We now know that the ancient Semitic moon god was called Sin, so the Wilderness of Sin could have been the night, when the moon god ruled. When the Israelites left his domain - when day broke - they fought with the help of the sun.

On this basis, Wilderness of Sin was a poetic description of the night, contrasting the domain of the moon god with that of the sun god, who helped defeat the Amalek. On this analysis, there is no physical place corresponding to the Wilderness of Sin.

Not the answer you're looking for? Browse other questions tagged exodus geography or ask your own question.

12
Exodus 6:3 - what is the significance of God's different names in the Tanakh?
3
What does it mean to “lead the flock behind the wilderness”?
2
How was Aaron able to store the manna when the ark had not yet been erected?
2
Did Moses disregard God's command to bring the elders to meet Pharaoh in Exodus 3:18?
5
Which are the other tests/complaints mentioned in Numbers 14:22?
3
What is the correct date the Israelites arrived at Sinai?
3
Did Moses take them to the rock at Horeb for water and back to Rephidim?
2
Is there a chronological issue in Exodus 17,18 and 19?
1
Did God change his mind concerning visiting the sins of the fathers onto the sons in Jeremiah 31?
3
How many people left Egypt?