What does the 'body of flesh' mean in Colossians 2:11?

and in Him you were also circumcised with a circumcision made without hands, in the removal of the body of the flesh by the circumcision of Christ;

When you came to Christ, you were "circumcised," but not by a physical procedure. Christ performed a spiritual circumcision--the cutting away of your sinful nature.

What does the 'body of flesh' mean in Colossians 2:11? Is it talking about the condition of man as a sinner as NLT puts it?

which is translated as, 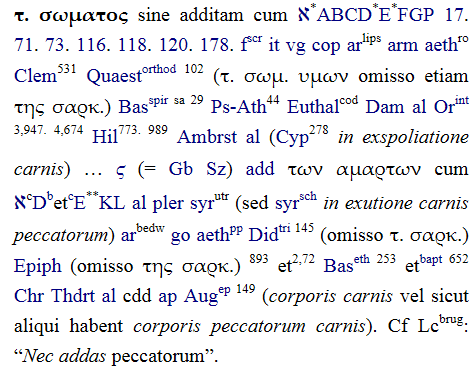 The phrase "the body of [the] flesh" (τὸ σῶμα τῆς σαρκός) also occurs in Col. 1:22 (ἐν τῷ σώματι τῆς σαρκὸς αὐτοῦ) in reference to the Lord Jesus Christ's own body. On the other hand, the phrase "the body of [the] sin" (τὸ σῶμα τῆς ἁμαρτίας) also occurs in Rom. 6:6 and Rom. 8:3, but the genitive noun is declined in the singular number (e.g., τῆς ἁμαρτίας) rather than plural number.

The noun ἀπεκδύσει, the dative, singular declension of the lemma ἀπέκδυσις, is related to the verb ἀπεκδύομαι, which occurs twice elsewhere, both times in the Epistle to the Colossians.

Do not lie to one another, after having stripped off the old man with his deeds.

The apostle Paul uses the phrase "the old man" elsewhere in his epistles.

Knowing this, that our old man is crucified with [him], so that the body of sin (τὸ σῶμα τῆς ἁμαρτίας) may be destroyed, so that we no longer serve sin.

Recall that the unregenerate present their body parts to Sin as weapons of unrighteousness, and in turn, Sin uses these body parts as weapons to war against the law of God in one's mind.

But you are not in the flesh, but in the Spirit, if so be that the Spirit of God dwell in you. Now if any man does not have the Spirit of Christ, he is not his.

"The body of sin" in Col. 2:11 is equivalent to "the body of flesh" and also "the old man." These are stripped off by baptism, the circumcision of the Lord Jesus Christ made without hands, when the Holy Spirit indwells the Christian, and the Christian submits to God's law in his mind, "the law of the Spirit of life in Christ Jesus" (Rom. 8:2), and he now walks "according to the Spirit" (κατὰ πνεῦμα) and no longer "according to the flesh" (κατὰ σάρκα), and invests himself with "the new man" (Col. 3:10).

Not the answer you're looking for? Browse other questions tagged colossians figure-of-speech or ask your own question.