In Romans 14:7, what is the meaning and translation of «ἑαυτῷ»?

My question concerns the reflexive pronoun ἑαυτῷ which occurs twice in this verse, once preceding the verb ζῇ and then ἀποθνῄσκει.

My translation of the Greek is,

The dative reflexive pronouns of Rom 14:7 need to be seen in parallel with the other datives that precede (and follow) it in the context of the passage. The key verse in understanding their meaning is back in Rom 14:4 (NKJV for all quotes):

Who are you to judge another’s servant? To his own master [τῷ ἰδίῳ κυρίῳ] he stands or falls. Indeed, he will be made to stand, for God is able to make him stand.

The datives in that verse reflect that the actions one does are ultimately done "to" one's own (ἰδίῳ) master's (κυρίῳ) judgment, no others. One's actions either stand or fall in the master's opinion. Note that the word "master" here is the same word as "lord," so it could be translated in v.4 "to his own lord he stands or falls."

This concept gets extended in vv.5-6:

Their are four plain datives (κυρίῳ) in v.6 that relate to the statement of v.4-5. Whether people observe particular days or not, or whether they partake of eating or not, they do so "to the Lord." The article is not present in the Greek, and one could translate it as "to a lord," or even as v.4 translated in the NKJV, "to a master," i.e. to whoever that one is observing the day or not for or eating or not for approval of his judgement. Yet clearly the context is to believers in the church of Rome, and it is "the Lord" that Paul is speaking of here, for he intersperses God in the context.

So Rom 14:7 (the verse in question) and v.8 continues from this context:

The statement of v.7 is proclaiming a rhetorically obvious truth (in the context of being judged); we will not judge our lives and our death. Another will judge them for their lives and deaths, that is "the Lord" (here with the definite article). They are judged of the Lord because they belong to the Lord (v.8), and so will be judged by Christ (v.9-10).

The idea is "to," for the parallel idea is "to whom is one looking to be judged" for his/her life (and all aspects of living out that life) and death? Not to him/herself, but to Christ the Lord, the master Who is served.

The apparent opposites occur between believers with the same devotion to the same Lord. Paul is saying that we are free, but we are slaves of Christ; however the Roman slave who is a Christian is also the freedman of Christ. Origen of Alexandria understood this tension of opposites when he wrote his commentary on this verse in question. 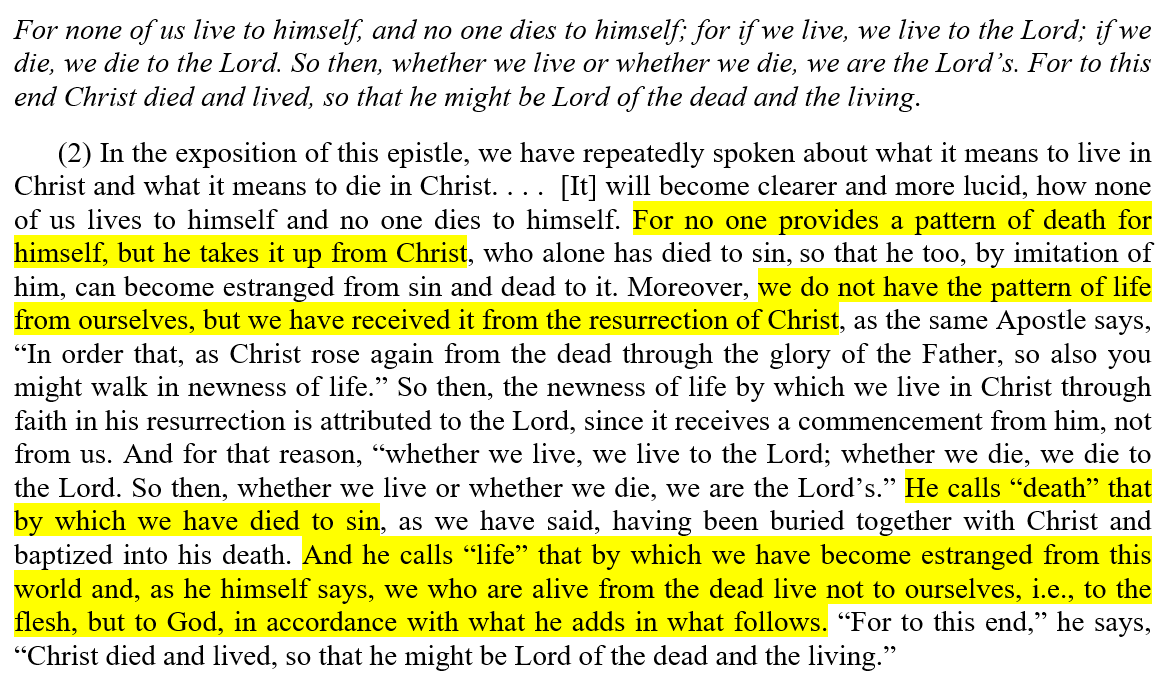 The tension of opposites found in the writings of the Apostle Paul are "no longer-now / already-not yet" motifs that aid readers to understand fine nuances. The following two examples illustrate:

We are no longer slaves of sin but are now slaves of righteousness (Rom 6:18); however, while we are already set free from the law of sin and death (Rom 8:2), we are not yet free from “the old self, which is being corrupted in accordance with the lusts of deceit” (Eph 4:22).

In summary, the apparent intent of Paul was to convey these fine nuances of apparent opposites, so that believers in Rome would be less apt to judge fellow believers.