The Greek text of Heb. 11:27 according to the Textus Receptus states,

which the King James Version translated as,

27 By faith he forsook Egypt, not fearing the wrath of the king: for he endured, as seeing him who is invisible. KJV, 1769 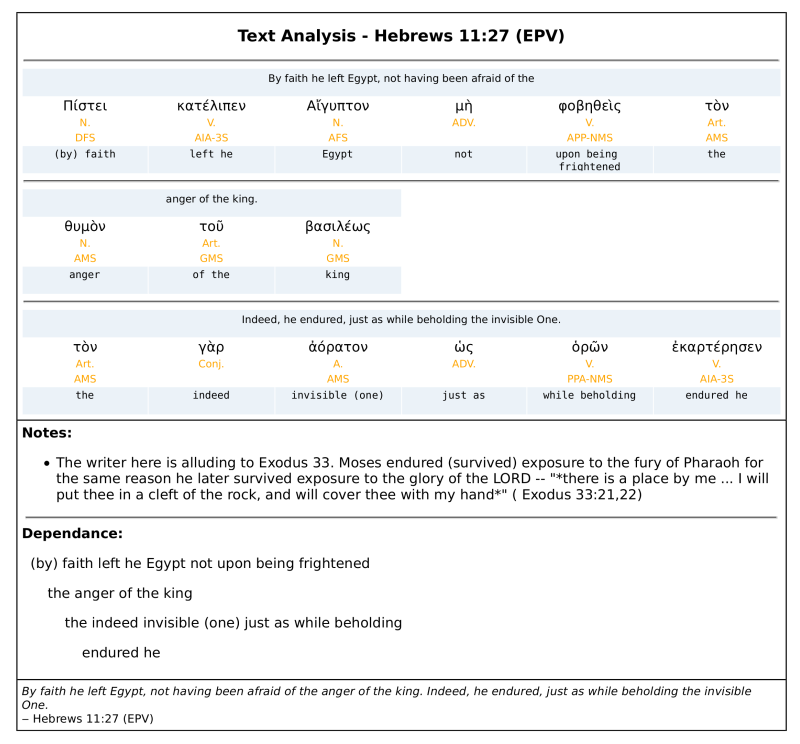 ἐκαρτέρησεν means "he endured", i.e. Moses survived exposure to the glory of the LORD -- ONLY because the LORD put him in a place near to himself in order to cover him with his hand, which is also how he survived the anger of the king (Pharaoh).

The apostle Paul explains that faith and sight are antithetical. Faith is always related to that which one does not and cannot see:

NIV Romans 8: 24For in this hope we were saved. But hope that is seen is no hope at all. Who hopes for what they already have? 25But if we hope for what we do not yet have, we wait for it patiently.

Hebrews 11:1-3 explains that God has arranged the ages in such a way that the future is always invisible to us and we must trust God by faith in hope:

1Now faith is confidence in what we hope for and assurance about what we do not see. 2This is what the ancients were commended for. 3By faith we understand that the universe was formed at God’s command, so that what is seen was not made out of what was visible.

In the balance of the chapter he illustrates this by way of illustration through the lives of various characters in Biblical history, including Moses. Of Moses he says that he persisted by seeing God with the eyes of faith. That is, though he could not see God with his eyes he acted for a future that God had convinced him was to be:

NIV Hebrews 11: 24By faith Moses, when he had grown up, refused to be known as the son of Pharaoh’s daughter. 25He chose to be mistreated along with the people of God rather than to enjoy the fleeting pleasures of sin. 26He regarded disgrace for the sake of Christ as of greater value than the treasures of Egypt, because he was looking ahead to his reward. 27By faith he left Egypt, not fearing the king’s anger; he persevered because he saw him who is invisible. 28By faith he kept the Passover and the application of blood, so that the destroyer of the firstborn would not touch the firstborn of Israel.

Had he actually seen God he would not have been walking by faith but by sight:

New International Version 2 Cor 5:7 For we live by faith, not by sight.

Faith is essential to pleasing God:

New International Version Hebrews 11:6 And without faith it is impossible to please God, because anyone who comes to him must believe that he exists and that he rewards those who earnestly seek him.

Faith in the gospel of Jesus Christ, particularly in the fact that God raised him from the dead is the basis of justification that is offered to all men now in the gospel age:

NIV Romans 10: 5Moses writes this about the righteousness that is by the law: “The person who does these things will live by them.”a 6But the righteousness that is by faith says: “Do not say in your heart, ‘Who will ascend into heaven?’ ”(that is, to bring Christ down) 7“or ‘Who will descend into the deep?’ ”(that is, to bring Christ up from the dead). 8But what does it say? “The word is near you; it is in your mouth and in your heart,” that is, the message concerning faith that we proclaim: 9If you declare with your mouth, “Jesus is Lord,” and believe in your heart that God raised him from the dead, you will be saved. 10For it is with your heart that you believe and are justified, and it is with your mouth that you profess your faith and are saved. 11As Scripture says, “Anyone who believes in him will never be put to shame.” 12For there is no difference between Jew and Gentile—the same Lord is Lord of all and richly blesses all who call on him, 13for, “Everyone who calls on the name of the Lord will be saved.”