Critical Edition of Septuagint in Hebrew

Has the Septuagint been translated back into Hebrew?

A critical translation to Hebrew of the LXX on Genesis was published by Moshe Zipor:

Are there any similar translations to Hebrew of the LXX on other books of the Bible?

Yes, there is at least one Hebrew rendition of the LXX that is aimed at reconstructing its vorlage (i.e. the text from which it was translated, in this case unpointed Biblical Hebrew). The Parallel Aligned Hebrew-Aramaic and Greek text was created as part of the CATSS (Computer Assisted Tools for Septuagint Study) project under the direction of Emmanuel Tov in the 1980s. It has undergone extensive revision and re-coding and is now available as part of several Bible software packages (Bibleworks, Accordance). To my knowledge, it does not exist as a print edition.

The CATSS tool is designed primarily for textual criticism, i.e. determining whether the LXX text can give us insight into a Hebrew reading that is more likely to be original than available Hebrew texts. Toward this end Tov and colleagues offer so-called retroversions when the LXX does not correspond to the Hebrew of the MT. In some cases, these are obvious. For example: 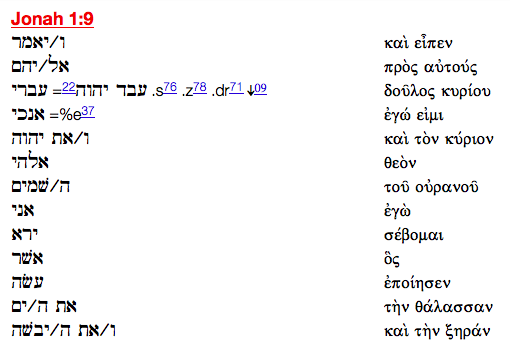 This is from the Accordance version of the database. On the third row you see on the left the MT עִבְרִי (a Hebrew), but the LXX on the right reads δοῦλος κυρίου (a slave of the LORD). It’s probable that the LXX translator either mis-read as dalet (ד) instead of resh (ר) or was in possession of a Hebrew text that differed from the MT so that he saw instead עבד (slave), which is listed in the reconstructions column.1 Other retroversions are more speculative, and the database indicates when the authors were uncertain.2

The CATSS tool also useful for gaining insight into the Greek language by understanding its correlation with Hebrew syntax and lexemes. It is coded to be searchable according to various aspects of the relationship between the LXX, the Hebrew of the MT, and the retroverted Hebrew.

It's worth noting that there are some special considerations when contemplating a translation of a translation. Some believe that the LXX translators did not always understand the Hebrew in front of them. For this reason and others, the LXX is occasionally unintelligible without consideration of the Hebrew behind it.

Not only is it colloquial rather than literary, regularly literal and often hackneyed rather than dynamic and flowing, but there are a great many items that are unintelligible, including most of its transliterations.

If, instead of the retroverted Hebrew created by comparison with the MT, one simply translated the LXX into (either Biblical or Modern) Hebrew, this creates a text that propagates the unintelligibility aspect of the LXX and yet has a superficial resemblance to the its vorlage (presumably not unintelligible) by virtue of being Hebrew. Such a text, it seems to me, would have an odd relationship with reality. That's not to say it can't be or hasn't been done, but it's worth thinking about.

1. The symbols following indicate that the yod was understood by the translator as an abbreviation for the tetragrammaton. A Q&A here on Psalm 18/19 is another example of the same consonantal exchange. According to CATSS reconstructions, the ד|ר interchange occurs over 500 times in the comparison between the MT and hypothesized LXX vorlage!

2. For anyone who thinks this sounds at all interesting, I highly recommend The Text-Critical Use of the Septuagint in Biblical Research (Eisenbraums, Third Edition, 2015).

Not the answer you're looking for? Browse other questions tagged hebrew septuagint tools-of-biblical-studies or ask your own question.

6
Linking NT Greek to Hebrew through the LXX
8
How do sins become strangers in Greek Psalm 18 (19)?

9
By what Name did God reveal Himself to Abraham?
5
Why does Numbers 29:39 (LXX) refer to "your salvation" instead of "peace offerings"?
9
How is the Septuagint interpretation of Psalms 40:6 reconciled with the Hebrew text?
7
Does Isaiah 7:14 indicate that the young woman is already pregnant?
9
Does Proverbs 8:22 say that God's wisdom was the first person/thing that God created?
13
Abimelekh (Αβιμελεχ) in the LXX
2
In John 20:17 does Jesus intent ἀναβέβηκα to have a secondary meaning related to sacrifice?
5
How should עֹ֥ז be translated in Psalm 8:3?
1
Given the dynamics of the words πλησίον and רֵעַ, what did Jesus illustrate with the Good Samaritan?