How many days until Nineveh will be overthrown?

When Jonah declares the destruction of Nineveh to its inhabitants, his only words are (3:4b):

I noticed that the LXX (otherwise quite close to the MT in this book) has:

This seems like a strange transition to make, and I’m curious how it occurred. (Is there some theologic motivation that would cause the translator to change the length of time? Or some plausible way to make this be a “mistake”?) I assumed the MT was primary, but I was reading the (admittedly very old) ICC commentary by Julius Bewer which argues that the LXX reading is original! I know of no translations that do that.

Is “three days” possibly the original reading? If not, is there a plausible explanation of how/why it was changed in the LXX?

Before the appearance of the Masoretic Text in the Tenth Century, at least three early witnesses attest to the forty day period in Jonah: the Dead Sea Scrolls at both Wadi Murabba'at and at the so-called "Cave of Horrors" in Nahal Hever, which both date to the First Century; and, thirdly, the Targum Jonathan, which dates to the Second to Third Century. These three witnesses provide the backdrop to understand how Jesus of Nazareth may also have understood forty years in Jonah 3:4, since he had compared the destruction of Jerusalem in AD 70 (which occurred forty years from his resurrection) with the "resurrection" of the sign of Jonah, for which the Assyrians from Nineveh had destroyed northern Israel forty years later in 722 BC (that is, from the time of Jonah's ministry to Nineveh).

The following image comes from a parchment fragment in the caves of Wadi Murabba'at, which date to the First Century. The Hebrew word for "forty" is אַרְבָּעִים (ʾǎr·bā·ʿîm), which appears visible in the image below. 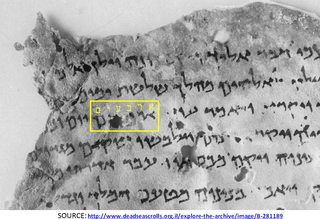 For the second fragment, there is no online pictorial image available for Dead Sea Scroll 8HevXII (in reference to Jonah 3:4) from the caves at Nahal Hever, where dozens of skeletal remains were also found of people involved in the Bar Kokhba revolt (132–136). Thus the location is termed the "Cave of Horrors." That is, the following fragment appears in Greek according to Naḥal Ḥever Greek Minor Prophets, Reconstruction (2010) available through Logos Bible Software. 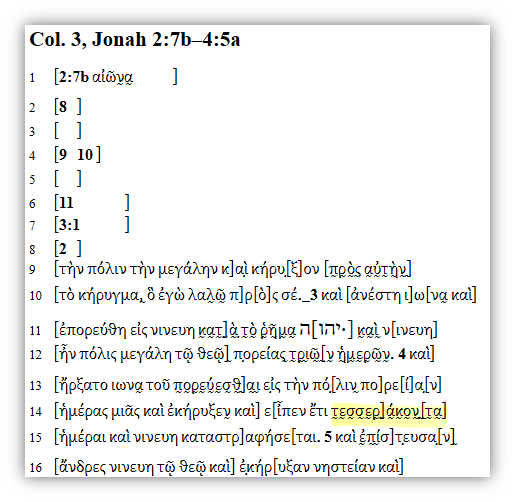 This document appears in Greek, and reflects the number "forty." This discovery suggests that translators had access to source documents for which they translated "forty" into the Greek translation of the Hebrew Bible. This discovery is remarkable because Swete (1909) in his Critical Apparatus mentions the earliest variant for "forty" in the LXX is the Sixth Century manuscript, Codex Marchalianus. In other words, the fragment found Nahal Hever would be the earliest witness in the Greek translation of the Hebrew Bible for the reference of "forty days" in Jonah 3:4.

This Targum appeared in the Second or Third Century of the current era. The following excerpt indicates that the Jewish scholars at the time had understood the correct translation from Hebrew to be forty days.

Proposed Translation: And Jonah began to enter the city one day's journey, and he proclaimed and said, "At the end of forty days even Nineveh will be overthrown."

Why does the LXX indicate three days?

There are some noteworthy comments from scholars. First, Spence-Jones (1909) provides the following:

That is, the Greek letters γ´ and μ´ were shorthand for 3 and 40, respectively, and Spence-Jones suspects that this shorthand was misunderstood and transposed by early copyists of the LXX.

Finally, other commentators such as McGarvey & Pendleton (1914) have suggested that Jesus of Nazareth had understood "forty" in a wider literary context in the Book of Jonah, because like Assyria (whose capital was Nineveh), forty years elapsed before the they destroyed northern Israel, and forty years was to elapse before the Romans destroyed the Jewish nation in AD 70.

Matt 12:41 - The men of Nineveh shall stand up in judgment with this generation, and shall condemn it: for they repented at the preaching of Jonah; and behold, a greater than Jonah is here. [Literally, repented into the teaching of Jonah. The meaning is that they repented so that they followed the course of life which the preaching prescribed. The phrase, “stand up,” refers to the Jewish and Roman custom which required the witness to stand up while testifying in a criminal case. The idea here is that the Ninevites, having improved the lesser advantage or privilege, would condemn the Jews for having neglected the greater. Nineveh’s privilege may be counted thus: a sign-accredited prophet preaching without accompanying miracles, and a forty-day period of repentance. In contrast to this the Jewish privileges ran thus: the sign-accredited Son of God preaching, accompanied by miracles, in which many apostles and evangelists participated, a forty-year period in which to repent.]

In other words, Nineveh repented and was the means of the destruction of the northern Jewish nation in 722 BC, which appeared to be forty years after the preaching of Jonah. Thus the idea of "forty" takes on more significance in the wider literary terms.

In summary, three early witnesses mention "forty days": the Dead Sea Scrolls at Wadi Murabba'at and Nahal Hever, and the Targum Jonathan. So the Masoretic Text is not the earliest witness in this regard.

Secondly, there is plausibility that Greek copyists may have misunderstood the Greek letters γ´ and μ´, which would be abbreviations for three and forty, respectively, in early Greek manuscripts.

Finally, the significance of forty days for repentance takes on significance, since Jesus of Nazareth had compared his resurrection from the dead to that of Jonah. That is, the repentant Assyrians later destroyed the northern Jewish nation in 722 BC, which did not repent. The parallel carries to the destruction of Jerusalem in AD 70, which had forty years to repent after the resurrection from the dead of Jesus. (Augustine, in his City of God, had understood some nexus between the resurrection of Jesus and the forty days that culminated in Pentecost.)

In conclusion, there appears to be weight in favor of understanding the number in Jonah 3:4 to be in reference to "forty," which has significance in the Book of Jonah in terms of days --and years-- for both Nineveh and the Jewish nation (and then later for the Romans and the Jewish nation in AD 70), since both events had occurred in direct relation to the "sign of Jonah."

Swete, Henry B. (1909). The Old Testament in Greek: According to the Septuagint (Apparatus). Cambridge: Cambridge University Press, Vol. III, 51.

Not the answer you're looking for? Browse other questions tagged textual-criticism septuagint jonah or ask your own question.

3
How many people were struck dead at Beth Shemesh?
7
Psalms superscripts: completion or choirmaster?
2
Approximately how many manuscripts of the Old Testament are extant today?
0
Does the fact that Nineveh was not destroyed after 40 days (Jonah 3:4) represent an unfulfilled prophecy by God?
2
How did Jonah become a sign to the people of Nineveh?
1
In Jonah (3:5-9), we see the great city of Nineveh repent of their wickedness. How might 8 simple words have such a dramatic effect on them?
2
Was Jonah's success in Nineveh improved by having tried to run away?