"Healing in his wings" is described in Malachi 4:2. In Mark’s Gospel, the woman with a "discharge of blood for twenty years" stated her belief that if she touched Jesus’ garment she would be made well.

She had heard the reports about Jesus and came up behind him in the crowd and touched his garment. For she said, “If I touch even his garments, I will be made well.” (ESV)

But for you who fear my name, the sun of righteousness shall rise with healing in its wings. You shall go out leaping like calves from the stall. (ESV)

But unto you that fear my name shall the Sun of righteousness arise with healing in his wings; and ye shall go forth, and grow up as calves of the stall. (KJV)

Are these verses related and can they be cross referenced? Was the woman’s belief described in Mark’s gospel derived from the passage in Malachi?

So I would say from its use in these Scriptures that it is not such a stretch for a woman to interpret kanaph for the border of a garment and to reach for that "wing" of the one she believes is Messiah and can heal her.

Here, also, is the matter of clothing. His garment was absent in his suffering. It appears again in the tomb, but with a counterpart for the body. And fine linen is the righteousnesses of the saints. I believe the woman would have appreciated all this, though in the heat of the moment, in the bustle of the crowd, she no doubt acted instinctively, out of sheer need and long affliction.

Kanaph, yes, is beams or wings, and has more than one allusion, spiritually. All the above allusions are of Headship and Priesthood; all result in restoration, apokattalasso, and full redemption, apolutrosis. Nigel.

Mark seems to be most directly alluding to his "tzitziyot", which all Jewish men were to wear: 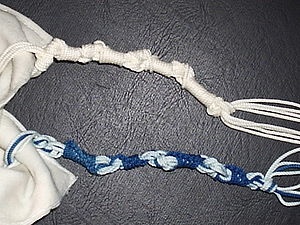 [Num 15:38 HNV] Speak to the children of Yisra'el, and bid those who they make them tzitziyot in the borders of their garments throughout their generations, and that they put on the tzitzit of each border a cord of blue: [Num 15:39 HNV] and it shall be to you for a tzitzit, that you may look on it, and remember all the mitzvot of the LORD, and do them; and that you not follow after your own heart and your own eyes, after which you use to play the prostitute;

The fact that Jews of the second temple period associated the clothing of the messiah with physical healing suggests to me that they did in fact associate his "fringes" with healing, per Malachi 4:2.

[Mar 6:56 HNV] Wherever he entered, into villages, or into cities, or into the country, they laid the sick in the marketplaces, and begged him that they might touch just the tzitzit of his garment; and as many as touched him were made well.

Actually, it should read “as many as touched IT were made well”! This in turn seems to ultimately be an allusion to this:

We know that Paul's clothing communicated healing as well:

[Act 19:11 ASV] And God wrought special miracles by the hands of Paul: [Act 19:12 ASV] insomuch that unto the sick were carried away from his body handkerchiefs or aprons, and the diseases departed from them, and the evil spirits went out.

Not the answer you're looking for? Browse other questions tagged mark nt-use-of-hebrew-bible malachi or ask your own question.

9
What was Malachi's meaning in "The sun of righteousness" vs the sun gods of his day?
4
What are the criteria for identifying an allusion?
1
Prayer of faith or oil that heals the sick in James 5:14-15?

3
Does the Sadducees' question in Mark 12 imply polygamy was considered sinful?
3
What does grow up as calves in the stall mean in Malachi 4:2b?
6
Does the miracle of the Woman with an Issue of Blood indicate that healing power flows spontaneously from Jesus?
2
Does Malachi 2:7 and 3:1 prove that "the messenger" will be a levite priest?
2
In Acts 5:9-11 why does Peter dispense immediate judgment?
3
What is the meaning of Malachi 2:14-15
2
How is Malachi 1:11 to be understood?
1
In Matthew 8:17 is he saying that Jesus fulfilled Isaiah 53:4 by healing some people or by taking away all disease from his people?
5
How to translate Malachi 2:15a?
4
In Malachi 4:6,what is meant by the phrase, "and he shall turn the heart of the fathers to the children and heart of the children to their fathers"?