Whose voice is it in Revelation 4:1? (Inconsistent red letter usage)

The first voice, described in Revelation 1:10-11 is heard (and written in red). Then John turns to see who or what is speaking, and sees what is described as Jesus. The words spoken by Jesus (verses 1:17-20) continue to be printed in red.

After these things I looked, and behold, a door standing open in haven, and the first voice which I had heard, like the sound of a trumpet speaking with me, said, "Come up here, an I will show you what must take place after these things." Revelation 4:1

Why is this? Is there debate over this voice not being Jesus? 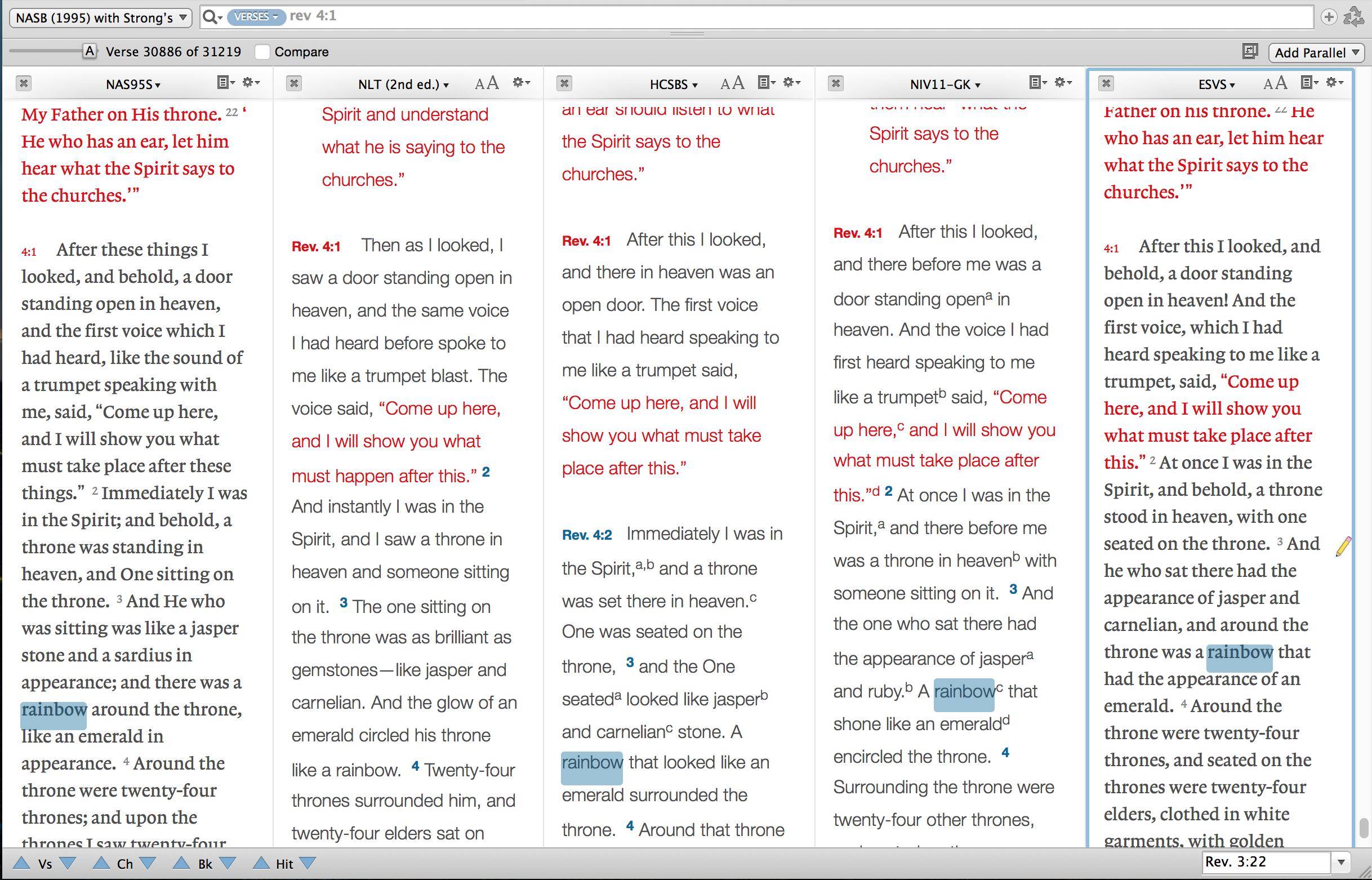 I emailed the Lockman Foundation regarding this question, and their editorial department responded, saying essentially:

I'm told that they have flagged this for further review and may make a change in future editions.

[Just to make my bias clear up front, I don't agree with the NASB's interpretation in this instance.]

I don't know any of the NASB translators personally (I'm not famous or anything thankfully), so I don't know for sure why they interpreted this passage in this way. C. Stirling Bartholomew explained the most likely possibilities (in my opinion). I'm guessing personally that the "second alternative" he mentioned is more likely to be the reasoning behind the NASB translators' interpretation, but I'd like to expand on it a bit and give a theory which might explain why they interpreted it in this way.

For the NASB translators, I'm guessing that the reason for "who" the voice is ultimately has a lot to do with "when" in the book it's speaking. I.e., when the NASB translators were deciding whether to put red lettering in this passage, I'm guessing that their final conclusion on "who" the voice is stems largely from "when"/"where" in the book this passage occurs within their outline of Revelation [which is a respectable conclusion, although I personally disagree with it].

Revelation 4-21 doesn't have any red lettering at all, which correlates at least indirectly to the fact that a popular interpretation of Revelation reads this same section as future events. This interpretation is especially popular among those with premillennialist views, and many of those with premillennialist views focus extra on preserving a word-for-word, literal rendering of the text, which is the first two of the NASB's main goals. Therefore, because of the high popularity of this interpretation of Revelation and the link between those who support it with those who have strong sola Scriptura literalis values, I think it's fair to guess that the NASB translators might have had this particular interpretation of Revelation in mind. And if they did, they would have also viewed chapter 4 as a major transition in the book. Yet even if they held to a different one, most other interpretations view chapter 4 as at least some kind of major turning point (the μετα ταυτα makes it pretty clear). This correlation is indirect: if someone interpreted 4-21 as strictly future events, they would not necessarily come to the same conclusion as the NASB translators did in 4:1. Nevertheless, if they had held to this interpretation, I believe it would have guided their translation in 4:1.

Looking at the text, if we were to leave out 4:1 for a minute just for argument's sake, it's reasonable to conclude that Christ does not speak at all in chapters 4-21. Many verses in 4-21 are similar to 1:10-11, where a voice gives instructions to John. Compared to the one in 4:1, it is much easier to conclude in these other examples that the voice is an angel, or at least someone other than Christ (e.g., 10:8). If one were to make this conclusion, he might see the voice in 4:1 as the first of the non-divine voices which give John instructions.

Given all that, I personally believe it's definitely Christ speaking in 4:1. I see it as a major connection to the three verses before it and a key conclusion which links 1:10-11 to 3:20. It's like, between the lines, John is wrapping up the intro and saying, "Now the good stuff. THIS is what He showed me."

I'd say John's doing everything he can to tell us that it's Christ who's speaking here. It's like Christ is saying, "Come and see what it's like to open the door. Come and sit with Me, the Victor, the King, on My throne."

Are you writing a sermon on this? If you are, I wish I would have seen this earlier in the week to give you some more ideas. There's so many awesome things here to preach on.

As Susan pointed out, ὁ νικων could be a pendent nominative instead of just the subject. If it is, that means that it's pointing out that ἀυτω ["him"] is the topic of the sentence, not the literal subject of the verb: the "I" in δωσω ["I'll give"]. That's how Pastor Wallace interprets it in his grammar book too. I'll open it for debate in another question because I still have some more ideas about it.

Also, I forgot to mention that Pastor Brighton argues that it's the "Son of Man" speaking in 4:1, and he, like most people, interprets the "Son of Man" to be "Christ". (His commentary is my personal favorite for Revelation.)

Rev. 1:10 I was in the spirit on the Lord’s day, and I heard behind me a loud voice like a trumpet

Rev. 4:1   After this I looked, and there in heaven a door stood open! And the first voice, which I had heard speaking to me like a trumpet, said, “Come up here, and I will show you what must take place after this.”

There are several factors to weigh in regard to who is speaking in Rev. 4:1. Starting with the assumption that Jesus Christ is speaking in Rev 1:10 it is common to view the language of Rev. 4:1 “the first voice, which I had heard speaking to me like a trumpet” as an anaphoric (backwards pointing) reference to Rev 1:10 “I heard behind me a loud voice like a trumpet.” The expression “the first voice” is understood to point in the direction of the first vision in chapter one and the repetition of formula “like a trumpet” helps to identify the first voice. This reading has found a large following. It isn’t as inevitable as it might seem at first glance.

David Aune (R. H. Charles redivivus) commenting on the distinction between the first and second voice.

Some further exploration of an alternative where the voice in 1:10 is not the same as the voice in 4:1. There are three issues, the discourse function of Μετὰ ταῦτα “After this” in Revelation, the meaning and reference of ἡ φωνὴ ἡ πρώτη “the first voice”, and the significance of the repetition φωνὴ … ὡς σάλπιγγος “voice … like a trumpet” in Rev. 4:1.

Μετὰ ταῦτα “After this” is a standard formula in the Apocalypse for introducing a new scene, vision or episode. It isn’t so much a pointer to what precedes as it is an announcement of a new scenario (G. Beale 1999, en loc).

It is possible that ἡ φωνὴ ἡ πρώτη “the first voice” only pertains to the current scene/vision — the first voice in this episode. If you read on in chapter four there are other voices. This voice could be understood as first in relationship to the voices of the four living beings and the twenty four elders.

The repetition of the trumpet language in Rev 4:1 might appear to uniquely identify the voice in Rev 1:10. However, John often repeats stock language which serves to enhance textual coherence without any implications being drawn in regard to referential identity such as we find in this instance.

The expression φωνὴν μεγάλην ὡς σάλπιγγος “a loud voice like a trumpet” is language that accompanies theophany and divine discourse, perhaps an allusion to Exodus 19. The trumpet blast is stock eschatological material, see the New Testament examples below.

Ex. 19:16   On the morning of the third day there was thunder and lightning, as well as a thick cloud on the mountain, and a blast of a trumpet so loud that all the people who were in the camp trembled.

Ex. 19:19 As the blast of the trumpet grew louder and louder, Moses would speak and God would answer him in thunder.

Ex. 20:18   When all the people witnessed the thunder and lightning, the sound of the trumpet, and the mountain smoking, they were afraid and trembled and stood at a distance,

Heb. 12:19 and the sound of a trumpet, and a voice whose words made the hearers beg that not another word be spoken to them.

Matt. 24:31 And he will send out his angels with a loud trumpet call, and they will gather his elect from the four winds, from one end of heaven to the other.

1Cor. 15:52 in a moment, in the twinkling of an eye, at the last trumpet. For the trumpet will sound, and the dead will be raised imperishable, and we will be changed.

1Th. 4:16 For the Lord himself, with a cry of command, with the archangel’s call and with the sound of God’s trumpet, will descend from heaven, and the dead in Christ will rise first.

In summary, this alternative claims that the language is compatible with the idea that there is a different voice in Rev 4:1 than in Rev 1:10. This isn’t going to win a big following. The evidence does appear to point in the other direction.

Let's simplify things and let the Bible interpret itself:

After this I looked, and, behold, a door was opened in heaven: and the first voice which I heard was as it were of a trumpet talking with me; which said, Come up hither, and I will shew thee things which must be hereafter. And immediately I was in the spirit: and, behold, a throne was set in heaven, and one sat on the throne. [Revelation 4:1-2 KJV]

The rest of the chapter describes the one on the throne and everything going on around it. But, don't stop there; chapter 5 continues the narrative:

The one on the throne must be God the Father, because He is holding the book. Then the "Lion of the tribe of Judah"; the "Root of David", the "Lamb as it had been slain", (obviously, this is Jesus), takes the book out of the right hand of Him that sat on the throne.

The command in Rev. 4:1, "Come up hither,..." should not be in red letters as it is spoken by God the Father, not Jesus.

Not the answer you're looking for? Browse other questions tagged revelation john or ask your own question.

1
What is the relationship between "in the spirit" in Revelation 1:10 & Revelation 4:1-2?
2
Does the voice of the seven thunders in Revelation 10:4 come from the throne of God?
1
Red-Letter King James Version: Who is speaking in Revelation 21:5–6?
1
In Revelation 4, who is "I" and who is "He"?
1
I was in the Spirit
3
Revelation 1:10 What is the significance that the voice is loud and behind John?
3
Why might John not be allowed to write the prophecy of "the seven peals of thunder" (Rev. 10:4)?
1
Did John come out of the Spirit during the sequence of visions he received on Patmos.?