Was Ezekiel overwhelmed about his commission?

I was recently reading another Q&A about Ezekiel's attitude toward his appointment as prophet. I quote from the answer there:

Daniel Block comments on the week in which Ezekiel sat stunned and bitter,

Ezekiel is infuriated by the divine imposition on his life and the implications of Yahweh's commission for him... The prophet does indeed share some of the hardened disposition of his compatriots.

The characterization of Ezekiel as stunned and bitter and the commentator's assessment that he is infuriated by the divine imposition seem to rest on 3:14-15:

The Spirit lifted me up and took me away, and I went in bitterness in the heat of my spirit, the hand of the LORD being strong upon me. And I came to the exiles at Tel-abib, who were dwelling by the Chebar canal, and I sat where they were dwelling. And I sat there overwhelmed among them seven days. (ESV)

The word overwhelmed (alternatively: astonished, stunned, distraught) is מַשְׁמִים (mašmîm) a hifil participle from √šmm "to be devastated". That would be fine if it were qal or some passive form, but the hifil seems to elsewhere1 carry the expected nuance of causation. HALOT (שמם, hif.):

My hangup is that this seems to need an object,2 and the idea doesn't really reflect the emotional status of the subject. The NASB is unusual in offering causing consternation, which makes sense to me.

How do translations arrive at overwhelmed (etc.), and is that the most likely meaning?

Ezekiel was despondent, which appears to be the meaning of the ESV translation "overwhelmed." That is, the Spirit of the Lord was upon him to prophesy, but he was despondent for several days, which left the exiles in silence.

First, the verb מַשְׁמִים (mašmîm) is a hifil participle from √šmm "to lie deserted; to lie stiff (with fear); to be terrified". This verb has an objective and subjective aspect. As will be seen later in this discussion, the participle is intransitive and thus the perspective is subjective: that is, Ezekiel was despondent, and this despondency resulted in complete silence. The following excerpt comes from the Theological Lexicon of the Old Testament. Please click on the citation to enlarge.

The full citation provides more information on other aspects of this verb.

Rashi was a Jewish scholar from medieval times who commented and elucidated the meaning of the Talmud and Hebrew Bible, and so his works remain a centerpiece of contemporary Jewish study today. His comments on the verse appear below courtesy of the chabad.org website.

In other words, Rashi took this word to mean that Ezekiel was despondent, which finds support in the relevant Targum as well.

The Targum Jonathan to the Prophets

This particular Targum appeared as early as the second or third century of the current era, and was the paraphrase Aramaic translation of the Hebrew Bible read in the Synagogue. The following is the relevant portion of the Targum with the proposed translation which follows. Please note the highlighted portion in yellow. 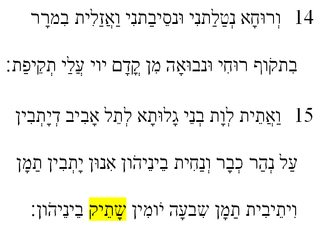 14 And the Spirit carried and took me, and I went in bitterness in the rage of my spirit, and prophesying from before the Lord had prevailed upon me.
15 Then I came to the sons of the exile at Tel-Aviv, who were sitting near the River Chebar, and I moved among them. They were sitting there, and I sat there seven days remaining silent among them.

The Aramaic word highlighted in yellow is שׁתק, which appears as an active participle (masculine singular) in the peal stem. That is, the word means remaining silent. This meaning is consistent with the commentary from Rashi.

Rabbi Altshuler was an 18th century scholar who wrote commentaries on the Hebrew Bible. He wrote on difficult words and phrases and their meanings. The following is his commentary on this particular word in Ezekiel courtesy of sefaria.org website.

The translation appears to be:

METSUDAT ZION ON EZEKIEL
מַשְׁמִים: The misery of their wonder and silence was just like the one of the magicians at that one time (Daniel 4).

This perspective also assumes an objective aspect. In other words, in the Book of Daniel the magicians were despondent concerning the visions of King Nebuchadnezzar, who himself was at a loss of words concerning the meaning of his dreams. The logic here is that the exiles at the River Chebar (in similar fashion) were despondent at the silence of Ezekiel, who was "at a loss of words" concerning his own recent visions of divine revelation.

This brief survey addressed the meaning of this Hebrew verb in light of perspectives from Rashi, the Targum, and one recent rabbinic scholar. That is, the Hebrew word מַשְׁמִים is best understood in as a causative participle with an explicit objective sense; however, there appears an implicit subjective sense as well in the context.

Not the answer you're looking for? Browse other questions tagged ezekiel or ask your own question.

9
Is Ezekiel a reluctant prophet?

11
Was Ezekiel 37 understood as a prophecy of a literal Resurrection?
4
Was Ezekiel a descendent of Zadok?
11
What is the point of Ezekiel not mourning his wife?
7
Did Ezekiel fulfill the 430 days of lying on his left & right side?
4
Did God "change His mind" in Ezekiel 4?
1
Was the army in Ezekiel 37:10 physical?
3
What is the significance of Ezekiel weighing his shaved off hair and beard?
1
Was there comfort in Sheol according to Ezekiel 32:31?
1
Noah was righteous - but what about his sons?