Ask Question
Asked 5 years, 9 months ago
Active 20 days ago
Viewed 4k times
2
This question already has answers here:
What is the significance of the author of Genesis using two different designations for God? (5 answers)
Closed 20 days ago.

In the Hebrew of Genesis, there are 2 verses that describe the creation of man:

So ´Élöhîm אֱלֹהִים created man in his [own] image, in the image of ´Élöhîm created he him; male and female created he them. (Holy Name KJV) 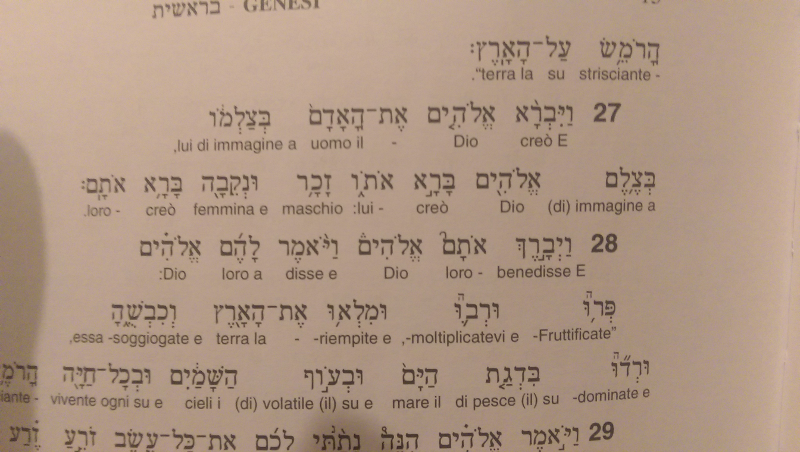 And Yähwè יָהוֶה ´Élöhîm אֱלֹהִים formed man [of] the dust of the ground, and breathed into his nostrils the breath of life; and man became a living soul. (Holy Name KJV) 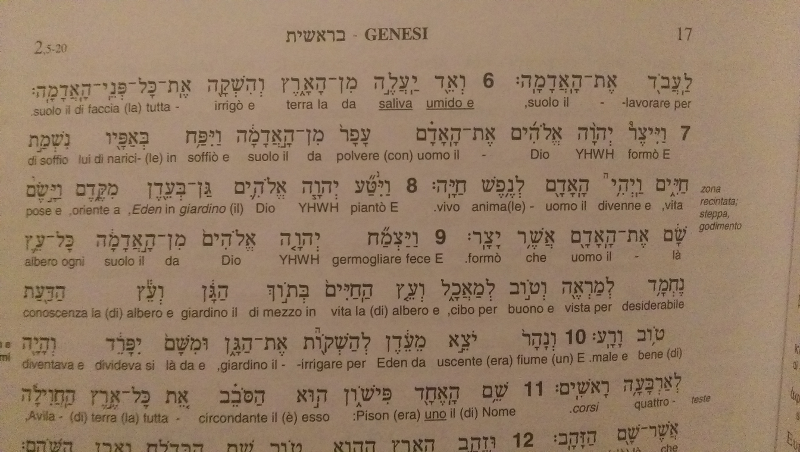 The version I am using of the bible is called "The Quadriform Bible". It’s a text that includes the Hebrew Masoretic version translated into Italian in interlinear form. I have included pictures with the verses for reference.

The confusion arises because we expect books to be written by the one author unless the text says otherwise. In these passages, there are two different authors, both anonymous but now known as the 'Priestly Source'(P) and the 'Yahwist' (J). The Priestly Source is considered to have written the first account, in Genesis 1:1-2:4a, while the Yahwist wrote the second account, 2:4b-25 and then the story of the Garden of Eden. They are two entirely separate and independent stories, and Leon R. Kass says in The Beginning of Wisdom: Reading Genesis, page 56, once we recognise the independence of the two creation stories we are compelled to adopt a critical principle of reading if we mean to understand each story on its own terms. This includes scrupulously avoiding reading into the second story any facts or notions taken from the first, and vice versa.

The Yahwist used the tetragrammaton, YHWH (pronounced Yahweh and sometimes translated into English as Jehovah) as the name for God.

The Priestly Source wrote its (whether a person or group) contribution centuries after the Yahwist and another early contributor, the Elohist, using a combination of names, like 'Elohim (favoured by the Elohist) and Yahweh, as well as newer names like El Shaddai ('God Almighty').

Kass says that pious readers, believing that the text cannot contain contradictions, ignore the major disjunctions between the two creation stories and tend to treat the second story as the fuller, more detailed account of the creation of man (and woman) that the first story simply reported.

Source theory attempts to rationalize Scripture to make it a work of man and not the Word of God. The question on how God writes about Himself is not a source of confusion when the text is seen in the light of the triune nature of God and the work of Jesus Christ in creation.

Genesis 1:1-2:3 relates creation from the beginning to the end of the seventh day using the word Elohim, a plural word. The only consistent explanation for using a plural word to describe a monotheistic God is the triune nature of God. In fact, it is illogical to promote the theory of human sources who describe a single God by choosing a plural word.

The second account identifies the Creator on a personal level as YHVH Elohim. All things were made through Jesus:

The two accounts are saying the same thing in different ways. The focus of the first is creation in general ending with the blessing of the seventh day. The focus of the second is on the first man and woman which focuses on their personal Creator, YHVH Elohim; the rest of the Bible continues this dual message a single God with a triune nature and a personal redeemer, Jesus Christ.

There are several elements in the second account that point specifically to the work of Jesus Christ. First, the account starts on the third day:

This is the history of the heavens and the earth when they were created, in the day that the LORD God made the earth...Genesis 2:4 NKJV)

The second account starts on the third day, highlighting a 3-day period. The 3-day period also connects the next events which occur on the sixth day: the creation of the first man and woman. In other words, the period of time Jesus will spend in the earth after His crucifixion is the patterned after His work of creation. The two records are purposely structured to demonstrate the significance of 3-days and a personal connection to the Creator.

YHVH Elohim gives the command not to eat from the tree of the knowledge of good and evil:

And the LORD God commanded the man, saying, “Of every tree of the garden you may freely eat; but of the tree of the knowledge of good and evil you shall not eat, for in the day that you eat of it you shall surely die. (Genesis 2:16-17 NKJV)

The second account makes the point there is only one way for death to enter the world: from a tree. By His work in creation, Jesus ensured that a tree would be the one and only way man could bring death into the world. Then He applied that same work by using a tree to bring life eternal into the world. His work of creation in the second account is specific in terms of name, day, 3-day period, and trees and how all of these inter-connect with the creation of the first man and woman. There is a single Author and a single Redeemer.

Also, there are two other records of the creation to consider:

This is the book of the generations of Adam. In the day that God created man, in the likeness of God made he him; Male and female created he them; and blessed them, and called their name Adam, in the day when they were created. (Genesis 5:1-2 KJV)

For in six days the LORD (YHVH) made heaven and earth, the sea, and all that in them is, and rested the seventh day: wherefore the LORD (YHVH) blessed the sabbath day, and hallowed it. (Exodus 20:11 KJV)

It is YHVH alone (not with Elohim) in Exodus who creates everything and blesses the seventh day. The way to reconcile all accounts is not by invoking different human sources. It is in the triune nature of God (Elohim) who creates all things through Jesus (YHVH).

Not the answer you're looking for? Browse other questions tagged genesis creation adam or ask your own question.

10
What is the significance of the author of Genesis using two different designations for God?
1
Does Genesis 2:4 to Genesis 3:24 Describe Events Which Took Place on the Same Day?

10
Is “breath of life” in Genesis 2:7 is the same as spirit?
14
Where was Adam created?
13
What is the meaning of 'spirit' in Genesis 6?
11
Are the three distinctive Hebrew terms, translated “breath of life,” suggesting there was a different mankind at creation than there was at the flood?
1
Is Job 32:8 equating “the breath of life” of Genesis 2:7 with the Holy Spirit?
2
Why does Genesis 2:7 read חַיִּ֑ים plural rather than singular
4
Is the spirit of man a created thing?
2
Is neshamah (breath) created or uncreated?