What did God put into the human heart according to the Hebrew text of Ecclesiastes 3:11?

The Masoretic Text of Ecclesiastes [= Qohelet/Kohelet] 3:11bα reads this way:

This has traditionally been read as indicated in the transliteration above -- as if it is a defective writing of what normally appears as עוֹלָם = ʿôlām "eternity", including the holem-waw. This form unambiguously occurs at one (other) place in the Hebrew Bible, in 1 Chronicles 16:36.

In the context of the verse as a whole, however, this appears to some commentators to yield poor sense, e.g., NASB =

... He has also set eternity in their heart, yet so that man will not find out the work which God has done from the beginning even to the end.

This Q&A is prompted by the partner on the Greek text: "What did God put into the heart of man according to the LXX in Ecclesiastes 3:11?"

Well, this is a famous crux, and there have been a number of solutions, some more plausible than others.

Michael Fox thinks that הָעֹלָם is a scribal error for עָמֵל (toil) which occurs two verses earlier. Here it would be not the usual toil but the mental toil (amal b'libam) of understanding one's place in the world.

There's also a fairly common Hebrew root (ayin-lamedh-mem) meaning to hide, so הָעֹלָם could mean "what is hidden." But you'd expect a niphal passive, as in Job 28:21 and it doesn't appear as a noun elsewhere. Revocalizing as "ha-ulam" it could be a nominalized pual passive. That works, but it's a speculation since there's no parallel usage.

There's an Arabic root "ilm" that means "knowledge" and the result is attractive but there's no Biblical parallel to this, so it's a pure speculation.

Seow in the Anchor Bible thinks it means what the traditional translations give, eternity, based on what comes three verses later: כָּל אֲשֶׁר יַעֲשֶׂה הָאֱלֹהִים הוּא יִהְיֶה לְעוֹלָם , where God's creation which we understand as transcending time contrasts with the world of time in which we toil, where there is a season for everything under heaven. In this verse Qohelet may be saying that our mind (lev) can take in the idea of the eternal though we live in the world of time.

He makes everything beautiful in its season. What's more, he frames the eternal cycle in the minds of men. Even so, a man is unaware of what he cannot comprehend ‒ the affairs of God from beginning to end. 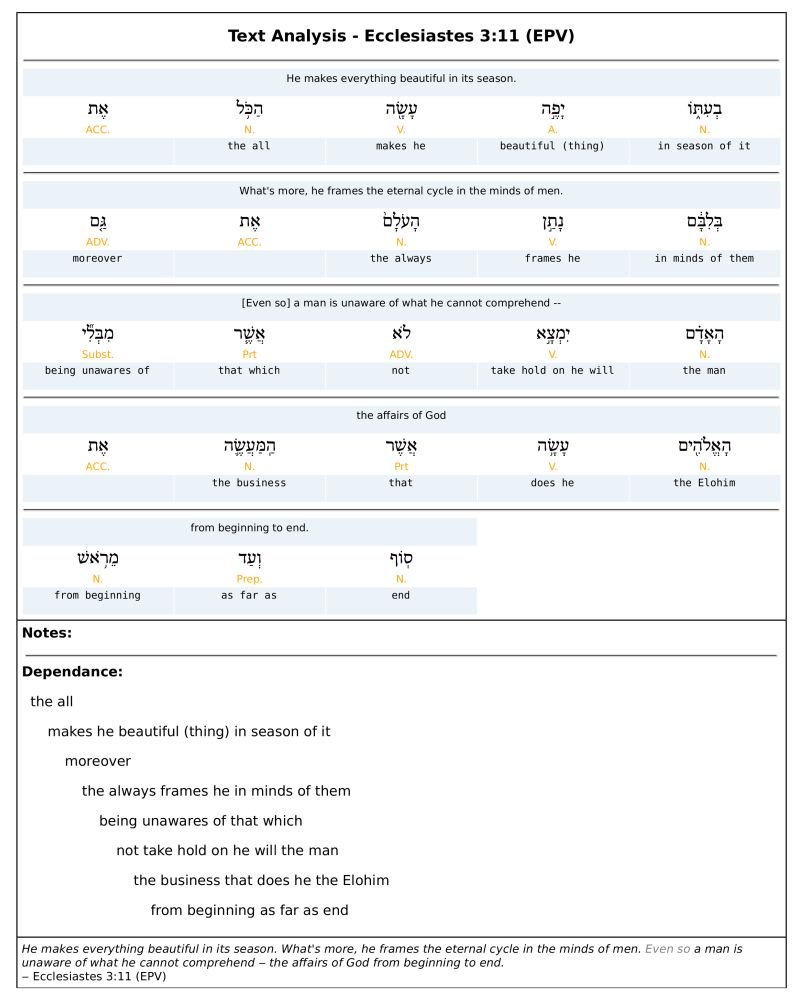 Since the Preacher begins the text in question with a reference to "seasons", then it seemed reasonable to me that הָעֹלָם֙ is not just about "eternity", but the "eternal cycle" of the seasons, which has consumed poets and men of science throughout the ages.

It also seems highly likely to me, that the Preacher's use of הָאָדָ֗ם is a reference to himself, but I went with the generic "a man", instead.

It has also been translated as "of old time", "perpetual" meaning future time but still in the frame reference of time on this world. Always things of this world. The previous verses were all about time. The time of things on this world are set in our minds. King James is right. Other versions are wrong. It should not be translated eternity. Man's problem is that he does not have eternity in mind; for, if he did then he would think on things eternal. Instead he has his affections on the things of this world and needs to get them out of his mind.

Not the answer you're looking for? Browse other questions tagged ecclesiastes masoretic-text or ask your own question.