What does the author of Ecclesiastes Chapter 2 mean that 'his heart was still guided with wisdom' as he went about doing foolish things?

The author of Ecclesiastes (I assume is Solomon) seems to be trying to find out what makes mankind happy and he conducts an unusual and determined experiment in Chapter 2, that of seeking wine, women and greatness which he could boast. However he finds that the only long-term satisfaction was merely the labour itself. Most other places in scripture would heap warnings and descriptions of foolishness upon those that would go conducting such an experiment.

What seems to stand out in all this foolish behavior is that Solomon not only claims that he did not lose his wisdom (2:9) but that it was actually still somehow 'guiding him' (v3) during this unusual quest for meaning.

I searched with my heart how to cheer my body with wine—my heart still guiding me with wisdom—and how to lay hold on folly, till I might see what was good for the children of man to do under heaven during the few days of their life. (ESV Ecclesiastes 2:3)

So it begs the question, what was this wisdom guiding Solomon during his experiments with folly?

The comments of Rabbi Shlomo Yitzchaki ("Rashi"), Jewish aggadic midrash (Qohelet Rabbah), the Targum Qohelet (Aramaic translation of the Hebrew Bible), and the structure of the Masoretic Text provide the picture of how Jewish scholars over the millennia had viewed the current passage at hand.

In other words, Solomon had relied on his own wisdom, which was profound. He therefore assumed that obedience to the mandates of divine revelation was optional, and so he immersed himself in the pleasures of his flesh. So from his perspective, the wisdom of divine revelation appeared to him as folly -- that is, his earthly wisdom had eclipsed heavenly wisdom, which was foolishness to him.

In summary, one cannot undertake the serious study of divine revelation without the purity of the obedient heart and body; otherwise the wisdom found Scripture will appear as foolishness.

The following comments below are from Rabbi Shlomo Yitzchaki ("Rashi"), Jewish aggadic midrash (Qohelet Rabbah), the Targum Qohelet (Aramaic translation of the Hebrew Bible), and the structure of the Masoretic Text. Each in turn will provide the picture of how Jewish scholars over the millennia had viewed the current passage at hand.

Rabbi Shlomo Yitzchaki ("Rashi") lived in 11th Century France. His comments have enabled scholars since to understand not only the Hebrew Scriptures but also Jewish oral tradition as codified in the Talmud. (His writings appear in the margins of modern editions of the Talmud alongside the Gemarah and Tosefta.) Ravi indicates that according to the passage at hand, Solomon immersed himself in the pleasures of his flesh while at one and the same time he immersed himself in the study of divine revelation. His comments in late Aramaic appear in the Chabad translations below.

ולבי נוהג בחכמה. - Even if my body is being indulged with wine, my heart is being conducted with wisdom, to hold on to Torah.

Ravi then continues. He compares King Solomon to King Saul, who viewed the commandments of divine revelation as foolishness. That is, there are specific commandments in Scripture relating to purity of heart and body.

ולאחוז בסכלות . - to things that appear to me as folly, concerning which I said, (Prov. 30:1): “God is with me; yea, God is with me, and I will be able,” for example, the wearing of shaatnez and mingled species in a vineyard, which Satan and the nations of the world dispute, and so he says (below 7:18): “It is good that you should take hold of this,” and also, concerning Saul, to whom it appeared folly to slay both man and woman, both infant and suckling, but it was the commandment of the Omnipresent, and he called it folly.

The commandments of separation and purity (shaatnez and mingled species in a vineyard) come from Lev 19:19 and Deut 22:9–11, and Ravi indicates that such commandments appear as foolishness to Satan and the nations of the world. In this regard, Ravi mentions King Saul, who considered the divine revelation from the Prophet Samuel as folly, and therefore he spared King Agag and the Amalekite spoils from destruction (1 Sam 15:1-11), which cost King Saul both his throne and legacy. Like King Saul, King Solomon also ignored the purity of heart and body for approaching divine revelation, which then appears as folly.

The Qoholet Rabbah is the non-legalistic exegetical commentary on the Book of Ecclesiastes. These commentaries capture the rabbinic interpretations of the Hebrew Bible. The following citation appears as follows.

Please click the image to enlarge (at its source page at Sefaria.org). 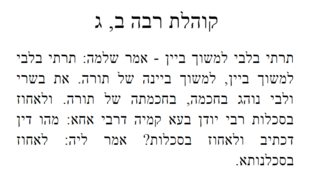 The midrash here suggests that Solomon “ingested” the wine of the wisdom of divine revelation, notwithstanding the reference was to folly. In other words, consistent with Rashi's observations, Solomon immersed himself in wine and in the study of divine revelation, which, to him, was folly.

The Targumim are the Jewish translation of the Hebrew Scriptures into Aramaic. They were spoken paraphrases, explanations and expansions of the Jewish scriptures that a Rabbi would give in the common language of the listeners, which during the time of this practice was commonly, but not exclusively, Aramaic. In this respect, the translation provides nuanced meaning based on the understanding of the Hebrew Scriptures by Jewish scholars at the time of translation. For example, the following are the relevant verses from the Targum Qohelet from the Comprehensive Aramaic Lexicon Project (2005).

Ecclesiastes 2:3
3 I searched with my heart to draw my flesh into the house of wine-drinking, and my heart persevered in wisdom; and to embrace the stupidity of youth until I examined and saw if whether the stupidity (lit., that from them) was good for the sons of men, who pass time while they are alive in this world under the heavens the number of days of their lives.

One more Jewish voice will provide the final perspective to this passage.

The system of cantillation marks therefore provides not the grammatical, but the musical, and therefore logical, parsing of each verse of the Hebrew Scriptures. In this regard, Bible Software Tools provide us the musical parsing of the following verse, which presents its logical structure.

The following diagram best "explains" what Wickes was describing regarding the divisions and logical structure of the verses of Hebrew Scripture. 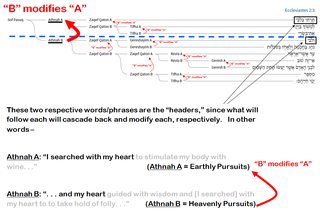 This schematic diagram depicts what Wickes was describing: the logical parsing of the verse through cantillation marks, which are driven by the vowels.

As noted by Rashi and others in this discussion, the structure of the Masoretic Text appears consistent in this regard. That is, Solomon had complemented his pursuit of carnal pleasures with the "folly" of his pursuit of the wisdom of divine revelation.

What does the author of Ecclesiastes Chapter 2 mean that 'his heart was still guided with wisdom' as he went about doing foolish things?

Answer: As Solomon pursued his fleshly desires, he fathomed divine revelation, and so 'his heart was still guided with wisdom.' However, that wisdom of divine revelation became folly to him, because of his immersion in fleshly pursuits.

In other words, one cannot fathom the wisdom of divine revelation without the purity of the obedient heart and body; that is, without such purity (or repentance), the wisdom found in Scripture will appear as mere foolishness to the seeking heart.

Not the answer you're looking for? Browse other questions tagged ecclesiastes wisdom-literature or ask your own question.

15
What does "Under the Sun" mean in Ecclesiastes?
7
What are the crooked things that can't be made straight? (Ecclesiastes 1:15)
5
What point is the author driving home by listing so many opposing activities that seem to have their own seasons? (Ecclesiastes 3:1-8)
1
What does "vanity" mean in "the creature was made subject to vanity" in Romans 8:20?
5
What does Ecclesiastes 12:7 exactly mean by "the spirit returns to God"?