Are there two distinct words [‘lexemes’] for ‘fish’ in Jonah 2?

Jonah 2:1 (Eng. 1:17) says that God appointed דָּ֣ג גָּד֔וֹל (dāg gādôl, 'a great fish') to swallow Jonah. The following verse tells of Jonah crying out from the belly of הַדָּגָֽה (haddāgâ, 'the fish’). There is an extra qāmets-he on the end of the second one, which apparently indicates a feminine version of the masculine noun.

These two words are tagged in the electronic version I have with two different entries in HALOT, dāg and dāgâ. The lexicon mentions that sometimes the masculine dāg is a collective noun whereas the feminine dāgâ refers to a single fish. But this doesn’t seem to be the case in the Jonah 2 passage where the referent of the two words is (by a simple reading of the text) identical.

Why are there two different words used to label the fish?

For reference, excerpted from the above citations (BHS | ESV):

May be the addition of Directive ה◌̞

I do not believe the passage needs to be viewed as two distinct lexemes.

The vowel pointing with the ה◌̞ suffix matches the form of what ה takes for its known directive uses, or the ה locale. Ronald J. Williams in Williams' Hebrew Syntax, 3rd ed. (Toronto: University of Toronto Press, 2007) notes of this suffix:

The directive suffix ה◌̞ was once thought (e.g., GKC §90a, c) to be the old accusative case ending that had dropped off elsewhere (§31 [Williams' section]). This view has been discarded now that materials in Ugaritic have been discovered and deciphered; Ugaritic is very close to Hebrew and has both the case endings (which Hebrew dropped) and a separate directive suffix (spelled 'h' in Ugaritic transcription). (p.25 §61)

The most likely candidate from Williams' subcategories appears to be:

Separative ה◌̞. The directive suffix ה◌̞ on a noun that is prefixed with the preposition מִן 'from' can indicate the direction away from the noun (p.25 §64a).

Here, the preposition is prefixed to the preceding construct word "from the belly" (מִמְּעֵ֖י) and the suffix attached to the absolute word "fish." Williams does not note if the ה locale ever happens in a construct chain with a preposition affixed, but Gerhards' quote (see below) notes the ה locale does appear "rarely as the nomen rectum of a construct relationship," giving as examples Josh 15:5 (found twice: וּגְב֥וּל קֵ֙דְמָה֙ [and the border toward the east], לִפְאַ֤ת צָפֹ֙ונָה֙ [on the side toward the north]; note the 2nd use is an example of a preposition [לִ] affixed to the construct of the chain, with the ה locale affixed to the absolute, exactly as I am proposing the reading here in Jonah to be) and also Josh 18:15 (found twice: וּפְאַת־נֶ֕גְבָּה [and the side toward the south], הַגְּבוּל֙ יָ֔מָּה [the border toward the west]).

The combination of the מִן preposition (prefixed or not) with the directive ה is what shifts the location of the he as being the source point rather than the towards point (which is more typical of a straight use of the directive ה). Some examples with מִן are Josh 10:36, 15:10; Isa 45:6; Jer 1:13, 27:16.

Certainly 2:1 [English] is referring to the belly as the "place" where Jonah is while making his prayer, so it is not only logically possible, it seems to me highly probable the idea is simply emphasizing Jonah prays "out from the belly of the fish." This is opposed to praying a prayer from his own belly, i.e. a heart-felt prayer as ambiguity could have arose in interpreting מְעֵי if דָּג were omitted—but that distinction probably could have been made without the directive ה added to דָּג. Why then add it? At least two reasons seem plausible to me (and both may be valid at the same time):

A Couple Others Have Noted or Proposed Likewise

My argument above was originally made purely from the grammatical indicators, as I had not found others who posed the possibility, but have since found some support, and incorporated some insights from that into the above argument. The very few sources found so far that mention this as possible are noted here.

This discussion board post, though there the directive is taken as being swallowed into the fish, i.e. praying as he is being swallowed, with the idea "toward the belly of the fish" (that does not seem as logical to me as the solution I give above).

The entry for Jonah on academia-bible.com (The Scholarly Bible Portal of the German Bible Society) has a note about this possibility. I quote the German and then a translation:

A further possibility, although certainly not without problems of its own, is the assumption that Jonah 2:2 does not have a feminine form, but rather a form augmented by ה locale (cf. Gerhards 2006, 52).

The work being referenced is M. Gerhards, Studien zum Jonabuch (BThSt 78; Neukirchen-Vluyn, 2006). The proposal appears on pages 51-52 (italics in original; bold emphasis added by me1):

In 2:2 there is another striking linguistic variation: the fish, which in 2:1, 11 is called דָּג, is here called דָּגָה. Instead of the masculine, an apparently feminine form is used. What in Jewish reception gave occasion for explanatory elaboration,137 was analysed in literary-critical terms by many of those holding to the unoriginality of the psalm of Jonah, in order to demonstrate that the introduction of the prayer is also literarily secondary.138 But if one nevertheless has substantial grounds for considering the psalm as an original component of the narrative, its introduction cannot be eliminated. There is another possible explanation of this difficult form; it is also a preferable explanation, since literary criticism cannot resolve the problems with the form דָּגָה, should the feminine actually be intended. In the Old Testament, the feminine form is always used as a collective.139 Since the feminine in its ordinary usage has no place in this text, it is likely that [bietet es sich an] the ה- in דָּגָה should not be construed as a feminine ending, but rather as a ה locale. 2:2 would thus be translated: ‘Jonah prayed to Yahweh, his God, from the innards in the fish’.140 Then there is no problem for the form דָּגָה to be written by the same author as that of 2:1, 11. The local form can thus have its motivation in reinforcing the inhospitable setting of the prayer.

I cannot explain why this solution has not been mentioned more often in literature, nor explored in more detail at the scholarly level (or perhaps it has been explored, I the reference has not yet surfaced). For this reason, I leave the phrasing "may be" in my opening title to the answer, though I would replace it with "likely" from my perspective.

In my approach to the text, where the consonantal text is the inspired text (the pointing being useful commentary on pronunciation, but not without potential flaw),2 the directive ה is (1) possible, (2) makes the most sense of the text, and (3) has far fewer difficulties than seeing it as the feminine form of the word. This is because the original text, which would have been without pointing, would be הדגה (with the article as the text has) for either the feminine form of the word fish (דגה) or the masculine form with the directive he added (דגה).

1 I am indebted to Davïd for the English translations of the German texts here, as I do not read German (though I was able to find the academia-bible.com lead through searching on "ה locale" and then use Google translate initially to determine the value of the quote).

2 Even if one does not believe in the text being inspired, the earliest textform as we know it would have had no pointing, so the form of the word argument I make stands either way for the earliest version of the text.

There are two lexemes at hand. Thus the infinitive absolute in the Hiphil stem of the Hebrew verb דָּגָה seems to appear here, which would mean to cover with darkness. That is, the infinitive absolute here would function as a verbal noun, and therefore the הַ (he-) would be part of the hiphil stem. The word would therefore be translated "the deep covering darkness," which would appear more consistent with the immediate context, since Jonah in the following verses in context appears to be among "the roots of the mountains," which is not the fish or the sea, but the underworld of Sheol (or Hades). Thus Jonah prayed to the Lord his God "from the inner parts of the deep covering darkness."

This approach of interpretation appears to be in direct parallel to how Jesus understood the same passage. That is, Jesus applied the same very same context of Jonah to himself in Matt 12:40, where the center of the earth was in view -- that is, the deep darkness of Sheol.

The Hebrew word הַדָּגָה appears in the Dead Sea Scrolls (from not in the caves of Qumran, but in the ‏Bar Kokhba revolt refuge caves in Wadi Murabaat), which places the dating of the oldest textual witness to the Second Century. There is certainty then that the received Masoretic Text provides the accurate reading of the text, but the vowels in the Masoretic Text appear to be incorrect.

In other words, this word הַדָּגָה does not appear to be the collective term for fish (דָּגָה) ---which is how the Babylonian Talmud understands the word (Nedarim Folio 51B)--- but is the infinite absolute (hiphil stem) of the Hebrew verb דָּגָה (with the prefix הַ reflecting the hiphil stem), which means to cover in (the) darkness. Gesenius provides important research in this regard.

First, Gesenius (2003) provides the following for the verb דָּגָה, and he describes how the etymology of this verb relates to the meaning of "fish" in the collective sense. 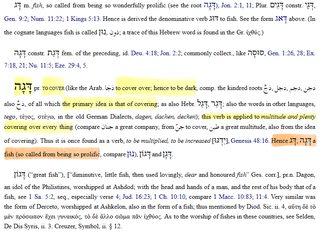 The examples highlighted in yellow cite instances of the infinitive absolute in the hiphil stem.

Based on this approach (the infinitive absolute in the hiphil stem appearing as a verbal noun as the object of the genitive), the proposed translation of the verse would appear as follows:

Jonah 2:1 (Proposed Translation)
1 Then Jonah prayed to the Lord his God from the inner parts of the deep covering darkness.

Note: The word deep would capture the causative force of the Hiphil aspect.

Jesus of Nazareth appears to have made the very same inference. The following graph provides the quick overview of the dichotomy and comparisons. 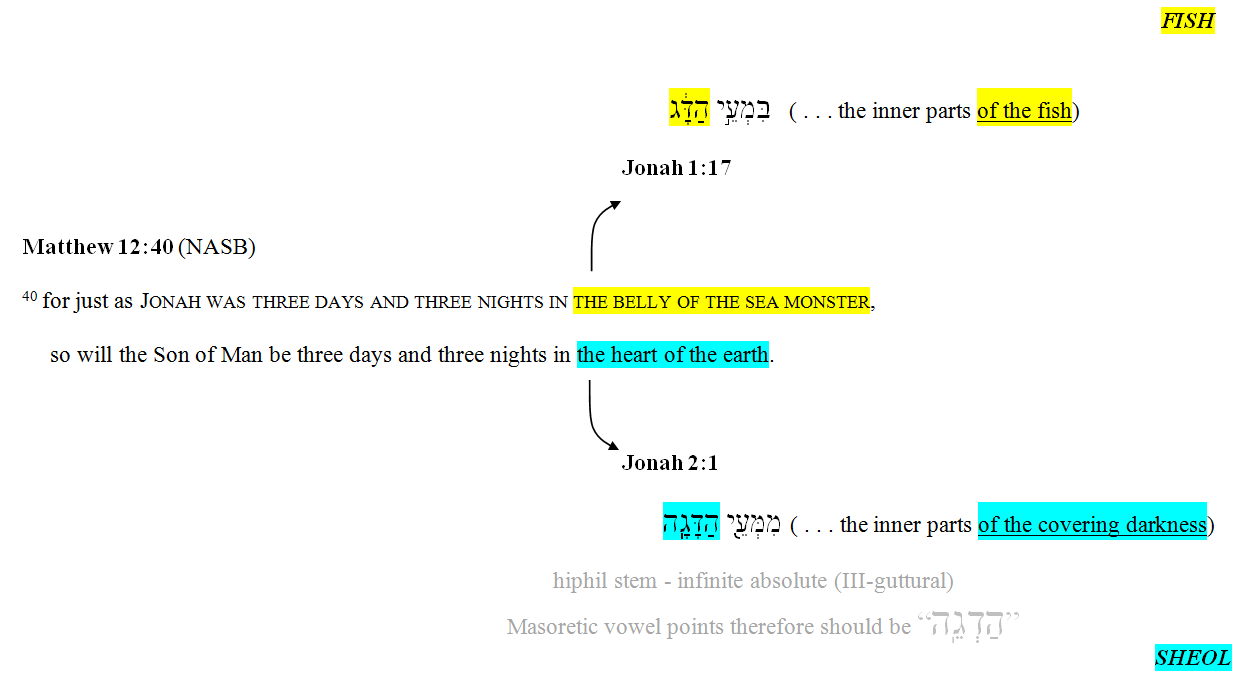 In summary, at the time of Jesus there were no punctuation or accent marks in the Hebrew Scriptures as the Dead Sea Scrolls indicate; therefore, Jesus applied the verses in Jonah to himself. That is, in regard to Jonah 2:1, Jesus made the apparent assumption that הַדָּגָה was not in reference to "the fish" in the collective sense, but to the infinite absolute of the verb דָּגָה in the hiphil stem, which would mean "deep covering darkness." In Sheol (or Hades) therefore the person of Jesus would spend three days and three nights in the "deep covering darkness" just like Jonah.

Greenspahn, Frederick E. (1984). Hapax Legomena in Biblical Hebrew: A Study of the Phenomenon and Its Treatment Since Antiquity with Special Reference to Verbal Forms. SBLDS 74. Chico: Scholars Press, xiii.

Not the answer you're looking for? Browse other questions tagged hebrew jonah or ask your own question.