This question was occasioned by this answer about קַו in Psalm 19:4 which pointed out its use in Isaiah 28:10.

Indeed, they will hear meaningless gibberish, senseless babbling, a syllable here, a syllable there.

This question is essentially about reconciling these three (in sense) renderings. Although there may be a better way to break down the issues at stake, here is what I see:

1. Technically, the NETS is translating from critical edition of J. Ziegler (which I don’t have access to) rather than Rahlfs, but this is the one translation among the group that appears rock solid, so I suspect the text is the same here.

2. Apparently there is some controversy about when the address shifts from Ephraim to Judah, with this verse left in the gray zone. I’m leaving that out of the question.

3. The NET notes make clear the translators’ understanding that these syllables (ki ṣaw laṣaw, ṣaw laṣaw, qaw laqaw, qaw laqaw) are the prophet mimicking the gibberish that the people will hear when foreign invaders conquer the land. (In case this is unclear, there is no ‘they will hear’ (nor ‘it is,’ nor any other verb) in the Hebrew.)

The Jewish perspectives on the Hebrew Scriptures often provide surprising, and more often than not, very illuminating insights into the “Old Testament.” In brief, while the verse contains obvious alliteration to babbling, the gist of the verse is as follows:

Translation from the Targum

First, the earliest commentary on this verse appears through the Targum Jonathan to the Prophets, which was the Aramaic translation of the Hebrew Bible by Jewish scholars. The Targum provided an amplified and sometimes expanded translation of Scripture according to the Jewish understanding at the time of the Second Century, and therefore throws light on how the rabbis had understood this verse. The following is the relevant verse from the Targum. Please click the image to enlarge.

For precept upon precept, precept upon precept
They were commanded to obey the Law, and what they were commanded they desired not to do. The prophets prophesied to them that they will [have to] repent, and the words of the prophets they did not embrace; they went after the pleasure of their soul, and did not desire to fulfill my pleasure.
line upon line, line upon line
They thought that they [words of the prophets] were not valid for them. They thought the things valid for them [were] worship of idols, and they did not consider worship in my holy temple.
here a little, there a little
Just as insignificant [or “little”] was my holy temple in their eyes, so insignificant [or “little”] was my Shekinah glory in their eyes.

The explicit commentary of the Targum (through its translation and “amplification” of the Hebrew text) was the corruption of the Word of God through the addition or replacement of the Word of God with words from false prophets. What is lost in the Targum translation is the babbling alliteration that appears in Biblical Hebrew, which are the words of the false prophets mocking the words of Isaiah. Finally, almost eight centuries later, two significant rabbinical scholars echoed the same sentiment concerning the interpretation of this verse.

This Jewish sentiment reappeared centuries later in the commentaries of the medieval Bible scholar Rabbi Shlomo Yitzchaki, or “Rashi,” who lived in the Tenth Century. Rashi commented as follows according to the translation available through http://www.chabad.org - please click on the image below to view the source online.

Another well-known Jewish scholar in medieval times was Rabbi Abraham ibn Ezra, who lived in the Eleventh Century. He makes the following commentary on this verse as follows. Please click on the image to enlarge.

Note: This citation comes from http://www.sepharia.org

The following is my proposed translation.

Ibn Ezra on Isaiah 28:10
כִּ֣י צַ֤ו לָצָו֙ - They [prophets of God] are wont to speak to them [false prophets] as the father will speak to the young son, who does not know more.
צַ֣ו לָצָ֔ו - The law after law, or commandment attached to commandment.
קַ֥ו לָקָ֖ו - Appendages to what is written [in Scripture].
זְעֵ֥יר שָׁ֖ם - Little bit time after time.

While these comments are more sparse than Rashi, the suggestion of ibn Ezra is consistent with Rashi, which is superimposition and therefore supererogation of the precepts of divine revelation by the false prophets. But how did the Jews ever arrive at this oral tradition?

Syntactical Division of the Verse

In the 9th and 10th Centuries, the Masoretic Scholars who lived in Tiberias Palestine had codified and assigned a system of cantillation and vowel markers in order to make the Hebrew Scriptures more intelligible. While other Jews in Babylon and Jerusalem had attempted the same in the same time period, the Tiberian School prevailed with the best codification system.

The following graph depicts their assignment of the vowel and cantillation marks for this verse according to those Masoretic Scholars in Tiberias. Please note how the syntactical relationship and parsing of the phrases of this verse appear in this graph. Please click on the graph to expand for better viewing.

Note: This graph comes from the updated and newly corrected Cantillation Package from Logos Bible Software.

According to the 19th Century Hebraist, Dr. William Wickes, the parsing of the words of Scripture provided not only melodic accompanying, but also syntactical and therefore logical structure in order to understand the relationship of words and phrases one to another in any given verse.

For example, the Jews viewed this particular verse through (what Wickes would have called) the “Antithetical Parallelism” of the dichotomy of the Hebrew verse. Wickes cites the following. In other words, each phrase in Isaiah 28:10 is parallel to the preceding phrase, but is antithetical. Please click on the image below in order both to enlarge and to view the source online. 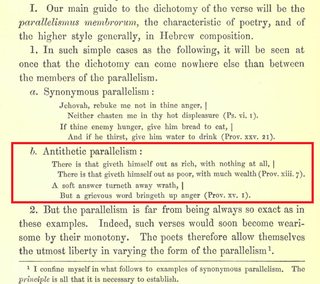 In addition, Wickes speaks to the verse containing three “members” (or three main ideas). That is, Isaiah 28:10 contains six disjunctive accents divided into three “members” - in this regard, Wickes notes the following. Please click on the image below in order both to enlarge and to view the source online. 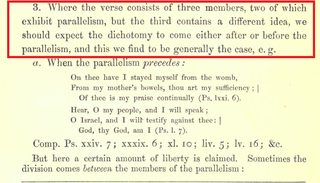 In other words, Jewish scholars had known and understood the system of vowels and accentuation (and the their significance to the dichotomy and logical syntactical meaning of the Hebrew verse) long before the Masoretic Scholars appeared in the 9th and 10th Century, who only codified these oral traditions in what we know today as the Masoretic Text. If this hypothesis is true, then each phrase in Isaiah 28:10 would stand in antithetical parallel to the preceding phrase. In this light, the translation of the LXX in Second, Third, and Fourth Centuries before the Common Era makes more sense.

For example, the following is the accepted reading of this verse according to Harry Swete, who notes one minor variant reading and another variant reading in the Addenda, unlike Alfred Rahlfs and Robert Hanhart, who note none.

The LXX translators made the apparent inference that the first member of the verse was in “Antithetical Parallelism” to the second member of the verse, and thus (like the Targum which followed several centuries later) there appeared the superimposition and therefore supererogation of the precepts of divine revelation by the false prophets. That is, the interference of the false prophets with divine revelation was the “trouble added to trouble.” Like the Targum translation, the LXX loses the nuance of the babbling alliteration that appears in Biblical Hebrew, which are the words of the false prophets mocking the words of Isaiah.

This verse reflects the mocking words of the false prophets, who are trying to imitate the words of Isaiah through the babbling alliteration of a child. These prophetic words of Isaiah had concerned the idolatry of adding unholy precepts to divine precepts and false prophecies to the lines of Scripture. (The very syntactical structure of the verse in Hebrew appears to compare and contrast the ideas in “Antithetical Parallelism.”) When the LXX translators took this verse, they appeared to translate this aggravation of divine revelation through the contrasts of trouble (θλῖψις) and hope (ἐλπίς). The Targum translators went farther, and translated the verse in explicit terms consistent with the apparent syntactical structure of the verse in “Antithetical Parallelism.” Finally, Jewish oral tradition (according to Rashi and ibn Ezra) remain consistent in this regard.

In summary, apparent differences in translations of the Hebrew Bible stem from the traditions of the Jews, who have codified their understanding of the Scriptures in the received Masoretic Text. This preservation in the Masoretic Text occurred not only through a system of vowels, but also of cantillation, which provides insights concerning the logical and syntactical structures of the Hebrew verse as was understood by the Jews.

Perhaps the answer is simple: one of context.

Isa 28:11 says that God will speak to this people, (the Assyrians) and Israel will hear the language of the Assyrian rulers who will attack and capture them - a language, which is characterized as a language of stammering lips and a foreign tongue. Verse 10 previously conveyed this as gibberish in the hearing of those of Israel, as follows:

Indeed, they will hear meaningless gibberish, senseless babbling, a syllable here, a syllable there - as if in a foreign language that Ephraim is totally unfamiliar with, spoken by those who invade and conquer them and rule over them.