Do linguistic features of Ecclesiastes rule out Solomon as the author?

If the book of Koheleth were of old Solomonic origin, then there is no history of the Hebrew Language.

His argument seems to be that the Hebrew is characteristic of a much later era, with substantial Aramaic influence. On the other hand, a long tradition asserts Solomonic authorship, and some modern commentaries object to Delitzsch’s conclusions. The New American Commentary, for instance, says:

The peculiar Hebrew of Ecclesiastes cannot be evidence for a late date since it does not fit anywhere in the known history of the language. In no way, for example, does it specifically resemble the Hebrew of Malachi, Esther, or of the Chronicler.

Is the Hebrew of Ecclesiastes indeed characteristic of a later (post-exilic) period, or is there a better explanation for its idiosyncrasies?

hebrew authorship ecclesiastes
Share
Improve this question
asked May 14 '15 at 12:14

R. N. Whybray says in 'The social world of the wisdom writers', published in The World of Ancient Israel (edited by R. E. Clements), page 242, that Ecclesiastes is one of the latest, if nor the latest, of the books of the Old Testament, as indicated above all by the language in which it is written, which, though unique in various ways, has close affinities with post-biblical Hebrew. The New American Commentary, attempting to compare the Hebrew of Ecclesiastes with the Hebrew of an earlier period, is satisfied that there is not a match, therefore assuming that Ecclesiastes was written much earlier, when the consensus is that it was written later than these other books.

The book also demonstrates Aramaic influence, whether because it was originally written in that language and then translated into Hebrew, or because the author was more comfortable with the Aramaic language. Since Aramaic developed as a separate language well into the first millennium BCE, the Book of Ecclesiastes could not have been authored by Solomon. Aramaic became the lingua franca accepted in Judah from the time of the Babylonian Exile, and for this reason almost certainly pushes the authorship of Ecclesiastes beyond the time of the Exile. The evidence, cited above, of the Hebrew language contained in the book also places it quite late among the wisdom books of the Old Testament. Ecclesiastes, along with Proverbs and some Psalms, was attributed to Solomon because of the wise sayings it contains, hardly a secure basis for an attribution.

C.L. Seow says in his paper, 'Linguistic Evidence and the Dating of Qohelet', published in the Journal of Biblical Literature, Vol 115, No 4, 1996, page 645, says the text as we have it shows full use of vowel letters, and the ample use of internal letters points to an exilic or post-exilic date. Certain plural endings are also what one would expect from an exilic or post-exilic work. In fact, some plural suffixes (eg hem for feminine antecedents) are consistent with Late Biblical Hebrew and Mishnaic Hebrew. Seow says if the MT is a reliable witness to the book's original orthography, its spelling convention is quite consistent with what one would expect in the exilic or post-exilic period.

There are two recognised Persian words in Ecclesiastes, 'park' (2:5) and 'sentence' (8:11). These demonstrate that the book was written during or after the Persian period.

The Babylonian Talmud (Baba Batra, Folio 15A) indicates that Hezekiah had redacted Qohelet as well as several other texts of Hebrew Scriptures. Please click on the image below to view the entire passage from Talmud. 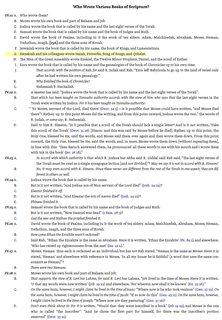 The Talmud seems to indicate that editors under the authority of Hezekiah compiled several texts of Scripture. For example, many scholars believe that the Book of Isaiah was written by various authors at various times; if editors under the authority of Hezekiah had redacted and compiled Isaiah and other such Hebrew Scriptures (such as Qohelet), then the nuances of "later" Hebrew would be apparent in these texts as well.

Not the answer you're looking for? Browse other questions tagged hebrew authorship ecclesiastes or ask your own question.

7
Does the book of Ecclesiastes portray Qohelet as the author?
3
Did Solomon write Ecclesiastes?