And all the earth sought to Solomon, to hear his wisdom, which God had put in his heart.

The term "וְכָל־הָאָרֶץ" appears to refer not only to the general area of Palestine and/or the Fertile Crescent, but beyond to the known world at the time.

The Masoretic Text provides valuable clues. First, the photographic facsimiles of the Aleppo Codex and the Leningrad Codex indicate that the phrase "וְכָל־הָאָרֶץ" occurs five times in the Masoretic Text. That is, each codex contains the margin note (Masorah parva) of five occurrences, as indicated by the Hebrew letter ה̇ with the dot on top.

When we look at the End Notes or Footnotes (Masorah magna) of the Masoretic Texts, however, we see an anomaly. The late Gérard Weil analyzed and compiled these notes for the editors of the Biblia Hebraica Stuttgartensia. The following is his own entry for these five passages. Please click on the image to enlarge. 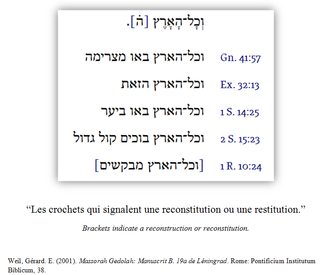 There appear to be two obvious reasons.

2 Chr 9:23 (NASB)
23 And all the kings of the earth were seeking the presence of Solomon, to hear his wisdom which God had put in his heart.

The Masoretes knew their Hebrew Bible "forwards and backwards," and even made allowances for apparent scribal errors through their own system of the "Qere and Ketiv." However, in this instance of 1 Ki 10:24, they avoided any grouping in the Masorah magna that would have grouped the phrase "וְכָל־הָאָרֶץ" with the other four exact phrases and occurrences in the Hebrew Bible, which were limited in scope to Palestine and/or the Fertile Crescent. By this omission, the Masoretes leave us to infer that the phrase would be more consistent if viewed through the lens of 2 Chr 9:23, where the context appears to open the scope of Solomon's reputation beyond the limits of Palestine and/or the Fertile Crescent. For example, the Queen of Sheba (1 Ki 10:1), appears to have come from southwestern Arabia.

One way of looking at this is a purely literal one, in which case it would be clearly impossible for everyone on earth to seek to hear Solomon. For example, Australian aborigines and American natives would obviously have no access to a Near Eastern ruler, no matter how wise. Another way is an allegorical one: the author of Kings was engaging in some hyperbole, to emphasise his case that Solomon was renowned for his wisdom. It is simply not possible for the reference to "all the earth" to be entirely literal, but we could look at how much literal meaning to assign to this statement.

A historical perspective requires recognising that 1 Kings and 2 Kings were written as a unified book, necessarily towards the end of the monarchy. This means the earliest draft of the Book of Kings was written nearly five hundred years after the events supposedly occurred. Modern scholars believe that Solomon probably existed, although no material evidence indisputably of Solomon's reign has been found. Oral or written traditions of unknown provenance were passed down and elaborated until they were incorporated into the Book of Kings, which was subsequently split into two separate books. History can not provide any support for people coming from outside the small Judahite enclave, to the west of the Dead Sea, to listen to King Solomon. From a historical perspective, reference to "all the earth" is somewhat meaningless.