In Acts 2:24a, Peter explains God’s plan for Jesus:

The phrase ὠδῖνες θανάτου seems to be a reference to LXX Psalm 17:5 (Eng. 18:4), which translates the Hebrew (18:5) phrase חֶבְלֵי־מָוֶת.

The cords → pangs shift apparently reflects different vocalization of חבל:
חֶבֶל (ḥeḇel, “cord") → חֵבֶל (ḥēḇel, “birthpang”).
The latter is the interpretation of the LXX. If it is indeed “birth pangs” (as opposed to just “pangs”), it seems to be a messianic reference, which is consistent with Acts. However, it's not really consistent with the context of the psalm, where the term refers to the psalmist’s affliction.

So my question at this point is:

But then, I wonder whether Peter, in a speech addressing Ἄνδρες Ἰσραηλῖται, was likely to have been speaking Greek (?). Which brings me to:

*The odd thing about the Greek to me, prompting this part of the question, is the usage of λύω + accusative. I would expect the accusative either to be the bonds/cords or the thing/person loosed rather than the thing from which [object] is loosed. (There is an alternative meaning «abolish», but translations — e.g. NIV: «freeing him from the agony of death» (as if: «λύσας ἀπό των ὠδίνων») — seem to want it to contain more common sense of λύω.) But if the accusative is a translation of חבל (i.e. spoken quoting the Hebrew, translated by Luke (or prior redactor) according to the tradition of the LXX) it may have meant cords in the context of the speech.

Note: This is a convoluted question. If anyone can decipher it and think of a way to re-write any part of it more simply, please do.

The Greek word occurs 35 times in the LXX. The following graph from Logos 6 software provides the demographic overview of these words to include at least 10 different Hebrew words/terms they modify. Please click to enlarge. 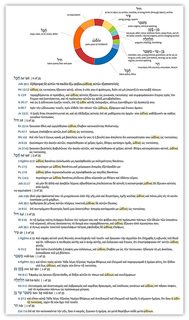 The following 5 accompanying spreadsheets from Logos 6 provide the respective translations of the 35 instances in the LXX where the Greek word ὠδίν appears. Please each click to enlarge.

Hebrews 11:29 (NASB)
29 By faith they passed through the Red Sea as though they were passing through dry land; and the Egyptians, when they attempted it, were drowned.

The word for drowned comes from καταπίνω, which means to swallow. In Matthew 12:40 Jesus compared his descent "into the belly of the earth" with Jonah, who was swallowed by the great fish and thereby descended to Sheol (or Hades) for three days and three nights. Since the day when the Egyptian Army was swallowed at the Red Sea seems to align with the day of the resurrection of Jesus from Hades, we see the idea flip-flopped. That is, death does not swallow life, but life swallows death in the resurrection of Jesus on the resurrection Sunday. Thus the following verses -

2 Cor 5:4 (NASB)
4 For indeed while we are in this tent, we groan, being burdened, because we do not want to be unclothed but to be clothed, so that what is mortal will be swallowed up by life.

Thus in Jesus death is "trapped" by life, and not the other way around.

In summary, the context in Acts 2:24 appears to have death in view with an emphasis on its confining power in Hades. (Some variants in the Greek text in addition to other witnesses make the direct correlation of death with Hades in this verse.) In light of the use of ὠδίν in the LXX, Peter would then seem to state that it was impossible for death to swallow, or confine eternal life in its power (in Hades).

Not the answer you're looking for? Browse other questions tagged psalms acts nt-use-of-hebrew-bible or ask your own question.

9
What are the arguments against the authenticity of “Peter's” sermon in Acts 2?