What are the arguments for and against Johannine Comma?

The authenticity of the Johannine comma, found in1 John 5:7, has been a subject of debate from the early sixteenth century. Wikipedia says the general consensus today is that that passage is a Latin corruption that entered the Greek manuscript tradition in subsequent copies. Manuscript evidence can be found here, in Wikipedia.

The text including the comma reads (KJV):

If the comma is removed, it would read:

For there are three that bear record, the spirit, and the water, and the blood: and these three agree in one

Arguments against the Johannine comma

The nature of Jesus and the concept of Trinity came to the fore in the late third century, resulting in fierce debate through the fourth century, including the Arian controversy. The Johannine comma begins to appear in Latin texts from this period and in later Greek texts. It is not found in the earliest Greek texts.

The editors of the 1808 New Testament in an improved version found the following reasons for rejecting the comma:

As this site notes, the Johannine comma has been ommitted from the United Bible Societies Greek New Testament, widely accepted as representing current scholarly opinion.

Argument for the Johannine comma

Dr. Thomas Holland provides a counter-argument. He acknowledges the comma's absence in early manuscripts, but says that the Greek grammar is faulty in manuscripts where the comma does not exist, as pointed out by Gregory of Nazianzus as early as 390 CE. This issue is resolved with the Johannine comma in place.

Adam Clarke summarizes well the arguments against the Comma when he says:

But it is likely this verse is not genuine. It is wanting in every MS. of this epistle written before the invention of printing, one excepted, the Codex Montfortii, in Trinity College, Dublin: the others which omit this verse amount to one hundred and twelve.

Clarke goes on to point out that Coverdale and Tyndale both included the verse, but enclosed it with parentheses (note that Tyndale's original 1526 version did not include parentheses here, but he added them to his later revision in 1534): 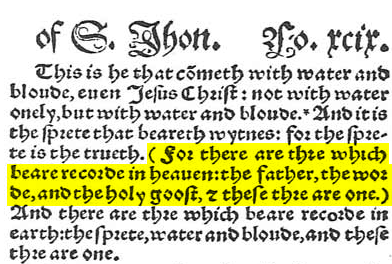 Though a conscientious believer in the doctrine of the ever blessed, holy, and undivided Trinity, and in the proper and essential Divinity of our Lord Jesus Christ, which doctrines I have defended by many, and even new, arguments in the course of this work [this commentary], I cannot help doubting the authenticity of the text in question....

However, Thomas Coke defends the verse in his Preface1 to 1 John:

[...] but the fact is, that this passage is found in a great number of manuscripts, and those the most ancient, and is quoted in books of the most venerable ecclesiastical antiquity, and all much older than those manuscripts which do not contain the passage, from the omission of which some modern heretics and daring critics pretend to draw inferences fatal to the authenticity of this text. But, not to mention St. Jerome, who found it in the Greek manuscript of the New Testament from which he made his Latin version, in which we find it also, and a long comment upon it in his Preface to the Canonical Epistles,—we find it cited in proof of the Trinity in the Confession of Faith, presented about the end of the fifth century by the bishops of the African churches to Huneric king of the Vandals, an Arian, and a great persecutor of the orthodox defenders of the doctrine of the Trinity.

Coke goes on to mention that Cyprian and Tertullian also referenced the Comma.

Here is Cyprian who is definitely quoting the Comma:

The Lord warns, saying, “He who is not with me is against me, and he who gathereth not with me scattereth.” He who breaks the peace and the concord of Christ, does so in opposition to Christ; he who gathereth elsewhere than in the Church, scatters the Church of Christ. The Lord says, “I and the Father are one;” and again it is written of the Father, and of the Son, and of the Holy Spirit, “And these three are one.”
-Ante-Nicene Fathers VOL 5. Cyprian. The Treatises of Cyprian, Treatise I "On the Unity of the Church", section 6.

Cyprian specifically says that "and these three are one" is written. 1 John 5:7 is the only place where that reference is found.

Thus the connection of the Father in the Son, and of the Son in the Paraclete, produces three coherent Persons, who are yet distinct One from Another. These Three are one essence, not one Person, as it is said, “I and my Father are One,” in respect of unity of substance not singularity of number.
-Ante-Nicene Fathers VOL 3. Anti-Marcion. Against Praxeas, "The Paraclete, or Holy Ghost. He is Distinct..." (Chapter XXV).

However, as you can see, Tertullian's is somewhat vague. I suppose he might have been referencing the Comma in 1 John 5:7, but without saying something similar to Cyprian's "it is written," it's hard to say that Tertullian is actually quoting anything.

John Gill's defense of the Comma:

For there are three that bear record in heaven
That is, that Jesus is the Son of God. The genuineness of this text has been called in question by some, because it is wanting in the Syriac version, as it also is in the Arabic and Ethiopic versions; and because the old Latin interpreter has it not; and it is not to be found in many Greek manuscripts; nor cited by many of the ancient fathers, even by such who wrote against the Arians, when it might have been of great service to them: to all which it may be replied, that as to the Syriac version, which is the most ancient, and of the greatest consequence, it is but a version, and a defective one. The history of the adulterous woman in the eighth of John, the second epistle of Peter, the second and third epistles of John, the epistle of Jude, and the book of the Revelations, were formerly wanting in it, till restored from Bishop Usher's copy by De Dieu and Dr. Pocock, and who also, from an eastern copy, has supplied this version with this text. As to the old Latin interpreter, it is certain it is to be seen in many Latin manuscripts of an early date, and stands in the Vulgate Latin edition of the London Polyglot Bible: and the Latin translation, which bears the name of [Jerome], has it, and who, in an epistle of his to Eustochium, prefixed to his translation of these canonical epistles, complains of the omission of it by unfaithful interpreters. And as to its being wanting in some Greek manuscripts, as the Alexandrian, and others, it need only be said, that it is to be found in many others; it is in an old British copy, and in the Complutensian edition, the compilers of which made use of various copies; and out of sixteen ancient copies of Robert Stephens's, nine of them had it: and as to its not being cited by some of the ancient fathers, this can be no sufficient proof of the spuriousness of it, since it might be in the original copy, though not in the copies used by them, through the carelessness or unfaithfulness of transcribers; or it might be in their copies, and yet not cited by them, they having Scriptures enough without it, to defend the doctrine of the Trinity, and the divinity of Christ: and yet, after all, certain it is, that it is cited by many of them; by FulgentiusF26, in the beginning of the "sixth" century, against the Arians, without any scruple or hesitation; and [Jerome], as before observed, has it in his translation made in the latter end of the "fourth" century; and it is cited by AthanasiusF1 about the year 350; and before him by CyprianF2, in the middle, of the "third" century, about the year 250; and is referred to by TertullianF3 about, the year 200; and which was within a "hundred" years, or little more, of the writing of the epistle; which may be enough to satisfy anyone of the genuineness of this passage; and besides, there never was any dispute about it till Erasmus left it out in the, first edition of his translation of the New Testament; and yet he himself, upon the credit of the old British copy before mentioned, put it into another edition of his translation.

Gary Everett, in his Study Notes on the Holy Scriptures (2013 edition) for 1 John 5:7, in addition to mentioning Tertullian and Cyprian, quotes Jerome and several others as well:

“…especially at the particular passage where the unity of the Trinity in the first epistle of John is read, in which indeed disloyal translators are truly, actually guilty of calling it a common mistake.” (Prologue to the Seven Canonical Epistles) (PL 29 cols. 827-829) (author’s translation).

“There are three who bear witness in Heaven, the Father, the Word, and the Holy Spirit, and these three are one.” (De Persecutione Vandalica 3.13) (PL 58 col. 227C) (author’s translation)

“There are three, it is said, who give a witness on earth, water, blood, and the Beloved, three are in us; and there are three who give witness in heaven, the Father, the Word and the Spirit, and these three are one.” (Contra Varimadum 1.5) (PL 62 col. 359B) (author’s translation)

“Which event testifies on earth three mysteries: water, blood, and spirit, which we read in the Lord’s Passion is fulfilled; in heaven, moreover, the Father, the Son, and the Holy Spirit, and the three are one God.” (Epistola S. Joannis Parthos 10) (PL 70 col. 1373A) (author’s translation)

The controversy over the Comma will probably never end, since it is missing from enough manuscripts to give even die-hard Trinitarians such as Adam Clarke reason to doubt it's authenticity.

However if we are to take Jerome's complaint about "unfaithful interpreters" seriously, along with the citations of bishops such as Cyprian, then the passage is indeed genuine.

1 The link I have provided to Coke's 1 John preface has antiquated spelling and might be hard to read. His preface is not currently available on Studylight.com, as it mistakenly contains his introduction to 1 John 5 instead. However his preface with modern spelling can be read freely with theWord Bible software or eSword.

Not the answer you're looking for? Browse other questions tagged textual-criticism 1-john or ask your own question.

11
Why is 1 John 5:7-8, found in the KJV, kept in the NKJV when it is believed to be inauthentic?
19
Is the ending of the Gospel of Mark (16:9-20) original?
3
Who are the deceivers 1 John is written against, mentioned in 2:26?
13
Matthew originally written in Hebrew?
2
Were New Testament Books Written to be Historical Documents?
13
Why Does The Thought Of 1 John Flow The Way It Does?
4
What is the BEST Textual Cristicism argument for keeping “us” in Revelation 5:9 and 10?