Why are there extra dots in Genesis 33:4?

I was reading Genesis 33 and noticed extra dots (i.e. not part of the niqqud that I understand) above the letters of “and he kissed him” in verse 4 (picture from archive.org's Biblia Hebraica):

and he fell on his neck and kissed him, and they wept.

A little bit of Googling shows that similar dots occur fifeteen times in BHS.* One explanation:

[The dots] were inserted to call attention to some important homiletical teaching in connection with the words, but possibly they indicate that the words or letters were doubtful and are to be deleted, presumably when Elijah comes and resolves the various scribal disagreements that have sprung up. Ezra is hedging his bets saying that if Elijah says ‘why have you written these words’ he will reply ‘I have placed dots over them’ and if he says ‘you have written them correctly’ then he will remove the dots! (Avot d’Rabbi Natan 30b).

With regard to Genesis 33:4 in particular, Rabbinic sources seem to disagree about whether the dots are meant to emphasize the reconciliation between the brothers or to indicate that this word should be understood as “and he bit him,” yielding a very different interpretation.

Why were these dots included in the Masoretic text?

The editorial dots in the text appear to indicate that Esau's kissing was insincere.

One of the most remarkable resources available today for studying the Masoretic Text is the Introduction to the Tiberian Masorah by the late Professor Israel Yeivin. This handbook provides an excellent primer for understanding the details and nuances of the Masoretic Text. The book is the transcription of Yeivin's notes (translated from Hebrew) when he was professor of the Hebrew University in Jerusalem.

For example, the following provides Yeivin's explanation of the dots found throughout many verses within the Masoretic Text. Please click on the images below to enlarge for better viewing. 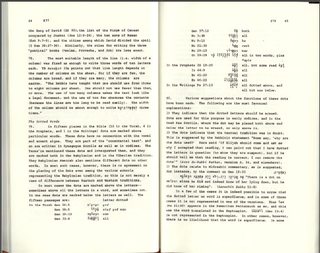 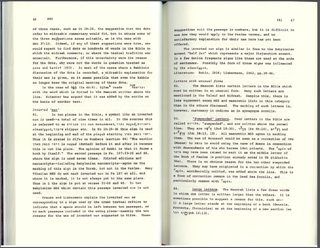 The second resource is The Masorah of Biblia Hebraica Stuttgartensia by Page Kelley and Daniel Mynatt. The following provides their explanation of the dots found throughout many verses within the Masoretic Text. Please click on the image below to enlarge for better viewing. 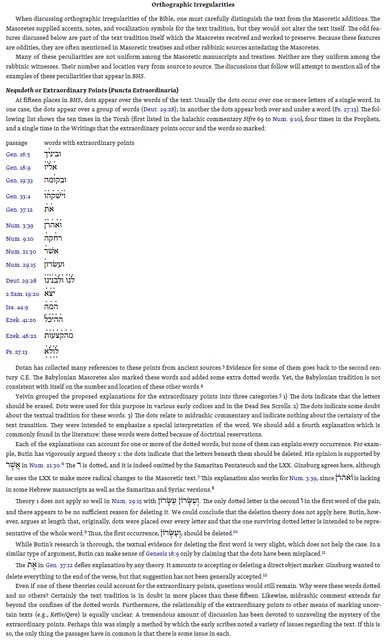 The suggestion of the insincere kiss comes from Keil & Delitzsch, who make the following observation as follows:

At the sight of Jacob he was carried away by the natural feelings of brotherly affection, and running up to him, embraced him, fell on his neck, and kissed him; and they both wept. The puncta extraordinaria above יִשָּׁקֵהוּ are probably intended to mark the word as suspicious. They “are like a note of interrogation, questioning the genuineness of this kiss; but without any reason” (Del.). Even if there was still some malice in Esau’s heart, it was overcome by the humility with which his brother met him, so that he allowed free course to the generous emotions of his heart; all the more, because the “roving life” which suited his nature had procured him such wealth and power, that he was quite equal to his brother in earthly possessions.

This suggestion has apparent support in the way the Masoretes accented the verse. That is, when the Masoretes applied accent and cantillation marks to the text, the implied how the words related one to another. That is, the disjunctive accents mark the emphasis of the verse. The strongest disjunctive mark (outside the Sillûq, which ends the verse with the Sof Pasuq) is the Athnah accent. The Masoretes placed the Athnah disjunctive accent on the word in question, which forces the reader to "hear" (or understand) the verse up to that point through what follows (which is the one remaining word in the verse). Please click on the image to enlarge for better viewing.

Please note that the clause of Zaqef Qaton A is modified Zaqef Qaton B; the clause of Tifha A is modified by Tifha B; and finally Athnah A is modified by Athnah B. (Please note that the verbs in Tifha A and Tifha B are in the third person masculine singular as is evident in the Leningrad Codex, and therefore there are no "Ketiv/Qere" annotations in the Masoretic Text as the Biblia Hebraica Stuttgartensia would otherwise suggest in its footnotes.) In other words, the two brothers were not kissing each other "on their necks," but instead it was Esau kissing Jacob "on his neck." The suggestion may point to the deceitful kiss from Jacob to his blind father Isaac (Gen 27:26). That is, Jacob's kiss had facilitated his deceit to receive the blessing of the right of the first-born.

The dots on Hebrew words found in the Masoretic Text may allude to any number of reasons for some particular editorial emphasis. When Esau and Jacob met, the emphasis was not that they embraced and kissed one another, but that Esau had embraced and kissed Jacob. (In contradistinction, later in the narrative in Gen 45:14 where the SAME Hebrew words appear, Joseph and Benjamin fall on each others neck and kiss each other in mutual endearment and sincerity.) However, in the verse at hand (Gen 33:4), the proto-editors of the Hebrew Text place emphasis on the kiss of Esau. This editorial emphasis appears to indicate that the gesture was not sincere, but was "pro forma." That is, the enmity between the descendants of Esau and Jacob was yet to continue in the developing narrative of the Hebrew Bible.

Finally, in the Christian New Testament, the insincere kiss appeared when Judas Iscariot betrayed Jesus the Nazarene in the Garden of Gethsemane. According to the footnote of this comment, the allusion and imagery of Psalm 41:9 would appear to point to the so-called "friend" (Judas Iscariot), who had betrayed his brother with a kiss. In other words, in the Bible the seed of unbelief continues to exist in inimical tension with the seed of Promise (Gal 4:28-31).

Not the answer you're looking for? Browse other questions tagged genesis masoretic-text or ask your own question.

8
Is God still at war with Amalek?