How convincing were the proofs of the resurrection in Acts 1:3?

In studying Acts this week in Turkish, I noticed that there is considerable difference in between translations of Acts 1:3. A quick look through English translations shows a similar range of possibilities, but it caught my attention that the ESV is a bit of an outlier in its word choice.

Acts 1:3 (ESV)
He presented himself alive to them after his suffering by many proofs, appearing to them during forty days and speaking about the kingdom of God.

Notably missing is any adjective connected to 'proofs'. A huge majority of English translations have some sort of intensifier here:

A handful of others do skip over this:

What's going on in the Greek here? I assume there is something fairly distinctive about this verse for so many translations to emphasis it in this way, but must not be quite a cut and dry case if a few major ones leave it out. I'm particularly interested in knowing the logic behind the ESV's choice to leave out any intensifier, but how KJV justified the use of such a strong one would also be interesting.

P.S. My apologies for the link-bait title.

The key term here is τεκμήριον which, as noted in an earlier comment has a technical sense in rhetorical contexts, as Liddell-Scott-Jones have it in their third meaning:

​3. in the Logic of Aristotle, demonstrative proof, opp. to the fallible σημεῖον and εἰκός,...

The broader sense under which this is given as a sub-heading is as follows:

And this is where the Greek semantics begin to bear on the tradition of English translation of Acts 1:3. τεκμήριον is also used in the LXX (e.g., 3 Maccabees 3:24; Wisdom of Solomon 5:11; 19:13) with the sense of "tokens" or "signs" in the less technical sense. So the question is whether, in Acts 1:3, it is this more general sense that is in mind, or the more technical, restricted sense.

There has been investigation of this diction. In older commentaries, it was sometimes suggested that this locution was at home in "Doctor Luke's" medical vocabulary, e.g. R.J. Knowling in volume 2 of the Expositor's Greek Testament (London, 1897), p. 52:

Although in a familiar passage, Wisdom v. 11, τεκμήριον and σημεῖον are used as practically synonymous, yet there is no doubt that they were technically distinguished, e.g., Arist., Rhet., i., 2.... This technical distinction, it may be observed, was strictly maintained by medical men, although St. Luke may no doubt have met the word elsewhere. Thus it is used by Josephus several times, ... it is also used by Thucydides, ii., 39, to say nothing of other classical writers. Galen ... states that rhetoricians as well as physicians had examined the distinction; Hobart, Medical Language of St. Luke, p. 184.

In a brief but widely-cited article, David Mealand examined this phrase and its usage across Hellenistic Greek literature, as its use in Acts 1:3 had struck some earlier commentators as unusual.1 Mealand demonstrates that the παρίστημι (in context, "presented") + τεκμήριον combination is "normal in Hellenistic Greek", but especially at home among the historians (he cites examples). This would make good sense in explaining Luke's usage in the "prologue" to Acts -- moreso than him being a medical man, I would think, although the "sure symptom" sense noted in LSJ has some appeal.

If one believes that τεκμήριον is being used in its more rhetorical, restricted sense, then one might wish to indicate that by suitably qualifying "proofs" to show that this is "knock-down argument" stuff, by using "convincing" or "infallible" as a modifier. This sense entered the English Bible translation tradition with the Acts 1:3 rendering of the Geneva Bible of 1560 (fifty years before the KJV, of course):

In the 1599 edition, the notes changed, and this precise rendering attracted a comment: 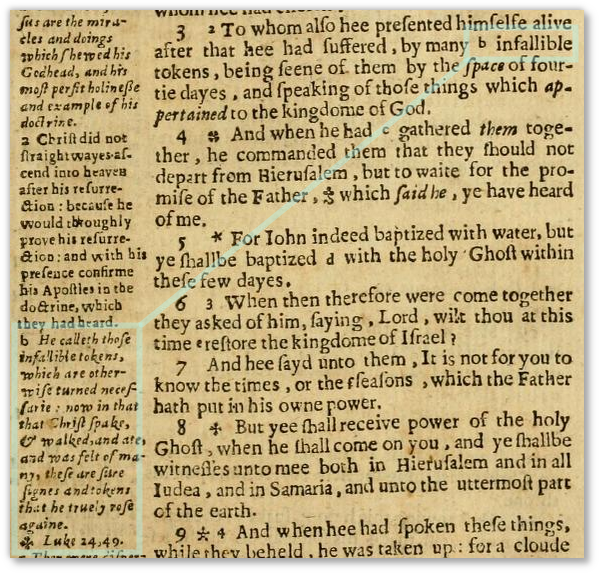 The issue here is that the "proofs presented" are not of the logical kind, as required by the more "technical" sense of τεκμήριον, since the post-resurrection appearances and actions which seem to constitute the τεκμήρια "presented" by Jesus are not of this kind (i.e., arguments). However, even with the "medical" sense in mind, it is fair enough to render the Greek with a modifier to indicate this force -- if one believes that it is in this sense that the term is being used.

Clearly, it was this decision which accounts for the Geneva Bible's rendering, and which then influenced the KJV translation tradition.2

Instead of a Conclusion

I don't know why particular English translations abandoned the modifier, although both the English and American revised versions (1881 and 1901, respectively) use the simple "many proofs". Perhaps the term "infallible" brought its own problems, given the dogmatic associations of the term -- I wonder if "convincing" had been used whether it might have stuck.

The lexicons seem to be in general agreement that the translation into English of 'proofs' requires an intensifier to bring it into line with the true sense of the Greek term.

That which causes something to be known in a convincing and decisive manner, proof. [BDAG 994]

The USB translaotors hand book has this entry

The Baker exegetical commentary also has an interesting section on this word. It points out that accoring to Witherington's commentray (p108) the term is only used in historical texts which may explain why this is the only occurrence in the protestant canon. It also suggests that "the term indicates that the proof points to a conclusion"

It is also helpful to consider παρέστησεν. This word is translated as 'presented' or 'showed' (or some other synonym) in our English translations but again this word in the Greek caries the sense of 'proved' as well. See for example Acts 24:13 "Nor can they prove (παραστῆσαι) the things of which they now accuse me."

In that usage we have these lexical entries

show to be true, establish the veracity of something (Ac 24:13)

72.4 παρίστημιf; παρατίθεμαιb: to establish evidence to show that something is true—‘to show to be true, to present evidence of truth, to prove.’παρίστημιf : οὐδὲ παραστῆσαι δύνανταί σοι περὶ ὧν νυνὶ κατηγοροῦσίν μου ‘nor can they present you with evidence that the accusations they now bring against me are true’ Ac 24:13. παρατίθεμαιb: διανοίγων καὶ παρατιθέμενος ὅτι τὸν Χριστὸν ἔδει παθεῖν ‘he explained (the Scriptures) and presented evidence that the Messiah had to suffer’ Ac 17:3.

According to the Baker exegetical commentary in Lysias, Against Eratosthenes 12.51 we also see these two terms used to together for proof.

English translators add the intensifier 'infallible' or 'convincing' etc. because they feel word 'proof' on it's own is not strong enough to convey the sense of the Greek in this verse which essentially says 'proof' twice.

We may never know why the KJV translators decided to use 'infallible' rather then 'convincing' which is probably more accurate as their translation notes are lost.

I don't know why the ESV translator did not feel the any intensifier was required but considering the weight I wish they had, though the lack of it does not, in any way, rob the verse of it's essential meaning, namely that Jesus Christ proved his resurrection convincingly in many ways.

There do not appear to be any text-critical concerns with the Greek text, only variation in the English translation of the word τεκμήριον (tekmērion, Strong’s G5039). The word is well-attested in literature but appears in only four scripture verses (depending on your tradition): Acts 1:3; Wisdom of Solomon 5:11 and 19:13; and 3 Maccabees 3:24. Thayer’s Lexicon defined it as “that from which something is surely and plainly known; an indubitable evidence, a proof.” More broadly in antiquity, Middle Liddel offers “a sure sign” and “a positive proof,” and LSJ notes the proofs are argumentative, not direct evidence. In Rhetoric 2.8, Aristotle stated that τεκμήριον are distinguished from other types of signs, “for only in this case, if the fact is true, is the argument irrefutable.”

All of the popular English translations of Acts 1:3 fit within the range suggested by the lexicons:

Regarding the KJV and ESV: While the amplified 'infallible proofs' in the KJV may feel stronger than the ESV's simple 'proofs', the KJV translation of the same word in Wisdom of Solomon is simply 'token' or 'signs'. This suggests the difference in Acts is rhetorical rather than definitional. The variations appear to reflect a difference in taste, not substance.

The Greek text for Acts 1:3 has pollois tekmhriois, translated as "many tokens", without the intensifier.

The Catholic, New American Bible follows the Vulgate in not having an intensifier:

Acts 1:3: He presented himself alive to them by many proofs after he had suffered, appearing to them during forty days 2 and speaking about the kingdom of God.

The original 1611 version of the KJV does have the intensifier:

Acts 1:3: To whom also he shewed himselfe aliue after his passion, by many infallible proofes, being seene of them fourty dayes, and speaking of the things perteining to the kingdome of God:

The Bishops Bible, on which the KJV was largely based, does not have an intensifier:

Acts 1:3: To whom also he shewed hym selfe alyue after his passion, and that by manye tokens, appearyng vnto them fourtie dayes, and speaking of the kingdome of God,

It would appear that the "infallible" intensifier entered the 1611 King James Version, in spite of His Majesty's instruction to the translators: "The ordinary Bible read in the Church, commonly called the Bishops' Bible, to be followed, and as little altered as the original will permit. "

Not the answer you're looking for? Browse other questions tagged greek acts kjv esv or ask your own question.

8
Acts 23:6: Were Sadducces different in their outward apparel from the Pharisees?
5
Who were the "all" distributed to in Acts 2?
3
What is the meaning of 'divers' in Acts 19:9?
2
What does the Greek word ὁμοιοπαθής mean in Acts 14:15?
4
How were the passage divisions in the King James Bible determined?
5
How possible is it that the Gospel of Luke and Acts were written for Paul’s defense?
4
In Acts 11:26 what were the disciples called in Antioch?
0
What is the accurate translation of Hebrews 6:1, "...let us cease to speak of the beginning of Christ..."?
4
How does the NASB render καρδίαν as quick in Acts 7:54?