Was Jabez asking God to keep him from harm or from evil/sin?

[NIV] Jabez cried out to the God of Israel, "Oh, that you would bless me and enlarge my territory! Let your hand be with me, and keep me from harm so that I will be free from pain." And God granted his request.

Was Jabez afraid of physical harm on him or was he afraid of committing sin which may result in sorrow and pain? Does the Septuagint rendering provide any additional insight about this?

The last section of Gesenius' Hebrew Grammar indicates that this specific verse contains aposiopesis, which provides for the awkward structure of the verse. That is, Jabez promises that the "if the Lord does (this and that) and..." and yet nonetheless the passage does NOT include any reference to what Jabez did in response to his vows. In other words, the awkward grammatical structure of aposiopesis is "normal" Biblical Hebrew, and therefore should not lead to an automatic assumption of corruption of the Biblical texts.

Finally, the Babylonian Talmud is explicit that this Jabez was Othniel, who was the younger brother of Joshua. That is, Othniel, which name means "Lion of God," had married the daughter of Caleb, whose name in Hebrew means "dog." This Othniel became the first judge of Israel. The Babylonian Talmud suggests that the protection "from evil" requested by Jabez (Othniel) may have included not only reference to his own disassociation from the stigma of his name of birth (Jabez = "he afflicts, he gives pain") or perhaps the family of his father-in-law ("dog"), but also reference for protection from the idolatry and incursions of land by the enemies of Israel, which were the major concerns during the time of the Judges.

The awkward grammatical structure of aposiopesis is "correct" Biblical Hebrew, and therefore should not lead to an automatic assumption of corruption of the text.

Second, both the Aleppo Codex and the Leningrad Codex indicate that there is a dagesh in the preposition mem, which is the abbreviated form of מִן. The comparative chart, below, provides facsimiles from both codices, which indicate the presence of the dagesh. Please click to enlarge image for better viewing.

The dagesh here is the "dagesh conjunctive," which Yeivin (2013) indicates has particular grammatical value in §407. That is, the "dagesh conjunctive" follows the Qameṣ (open syllable), and need not necessarily carry the accent. That is, the second or third syllable of the word may carry the accented stress. Please click to enlarge image for better viewing. 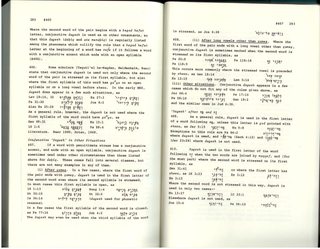 In other words, while the "dagesh conjunctive" may not carry the stressed accent, the exception nonetheless appears to place emphasis on the preposition in contradistinction to the word it modifies -- that is, to mark separation. Yeivin makes the following observation in §415. Please click to enlarge image for better viewing. 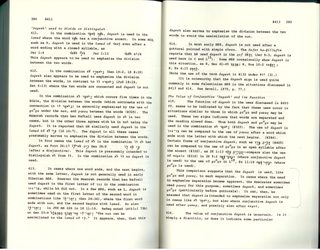 In summary, the Masoretes appeared to recognize possible ambiguities of this Hebrew word-phrase, and therefore assigned the "dagesh conjunctive" to the mem to ensure that the reader understood that the mem was the preposition מִן. In other words, the Masoretes appeared to indicate through their system of vowel points and accentuation that their understanding of these Hebrew letters in this particular verse was in reference to the phrase "from evil" and nothing else.

Finally, the Babylonian Talmud makes note of this passage as follows in b. Temurah 2:2, I.13.A according to the translation by Neusner (2011). Please click to enlarge image for better viewing. 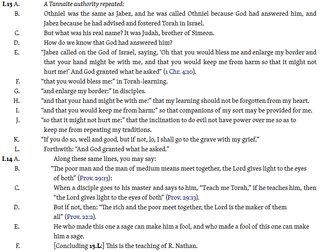 The point here is that the Lord can take anyone (irrespective of pedigree or circumstance) and elevate and/or demote them according to his will. In this case, Jabez ("he afflicts, he gives pain") became Othniel ("Lion of God"). In this respect, he was married to the daughter of Caleb (Josh 15:16-17), whose name means "dog" in Biblical Hebrew. There appears thus to have been stigma to both sides of the family of Jabez.

The Hebrew grammar of this passage is awkward, and appears to be stilted. However, the structure of aposiopesis by Gesenius indicates that this Hebrew grammar is "normal."

Secondly, the Masoretes appeared to see the possible ambiguity of the Hebrew word-phrase "from evil," and therefore assigned the "dagesh conjunctive" to eliminate the possible ambiguity with Hebrew words such as "pastureland" that would carry the same Hebrew letters (notwithstanding differences in vowel pointing). In this regard, the "dagesh conjunctive" mitigates any confusion by distinguishing the preposition in contradistinction to the word it modifies.

Finally, the Talmud relates that oral Jewish tradition understood Jabez to be the first judge of Israel. The Hebrew Bible therefore relates the following legacy:

Judges 3:9-11 (NASB)
9 And when the children of Israel cried unto the Lord, the Lord raised up a deliverer to the children of Israel, who delivered them, even Othniel the son of Kenaz, Caleb's younger brother.
10 And the Spirit of the Lord came upon him, and he judged Israel, and went out to war: and the Lord delivered Chushanrishathaim king of Mesopotamia into his hand; and his hand prevailed against Chushanrishathaim.
11 And the land had rest forty years. And Othniel the son of Kenaz died.

The Spirit of the Lord came upon Othniel, who was the deliverer of Israel. The result was rest in the land for forty years. He was therefore the "Lion of God." However, when we connect this same Othniel to Jabez, we see someone whose name suggests dubious pedigree or grieving life circumstances (Jabez = "he afflicts, he gives pain"). In this respect, the actual defining circumstances in the life of Jabez were not his accursed origins, but his committed life of prayer, which not only had preserved him "from evil" but had delivered the land of Israel from its enemies through him.

Not the answer you're looking for? Browse other questions tagged hebrew word-study septuagint 1-chronicles or ask your own question.