What does the superscript "-N" mean when added to the abbreviation LXX?

I've just read "LXX-N" in a commentary and I'm wondering what it means. I know LXX is Septuagint and usually the letters afterwards refer to a particular codex or manuscript, however there is no codex with the designation N according to Wikipedia. 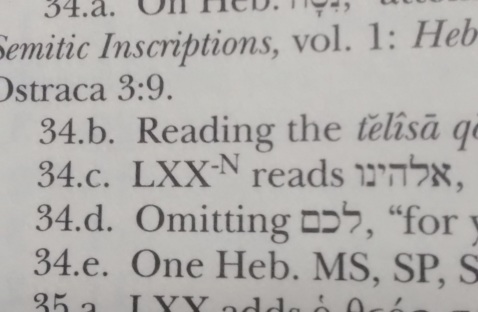 The author's own list of abbreviations doesn't mention it either. I'm guessing that it is not referring to a specific manuscript but something else that pertains to most Septuagint manuscripts.

LXX with superscripted N refers to Codex Venetus; the use of the minus sign probably indicates that this witness does not have the reading referred to (for more, see Addendum, below). It is cited as such by e.g. Jeremy Hughes in his Secrets of the Times (Sheffield, 1990). Information about this codex is difficult to come by, but there is a description of the sigla -- and it is confusing, so I'll let Siegfried Kreuzer explain:

Regarding the older historical books, I would like to mention two more codices. Codex M, which Is Codex Coislianus from the 7th century, is now in Paris. It comprises the Octateuch and the historical books. It has many marginal readings with Hexaplaric material. In the historical books its text is a mixture between the kaige text and the Antiochene text. Its close counterpart is Codex N, also called Codex V like Codex Venetus. The reason for the different designations is that N and V are two parts of one codex. One part is In Rome, while the other part is in Venice. Because of its close relation to M, the Roman part has been named N in Brooke-McLean. It was later identified as the first part of a codex whose second part had became known as Codex Venetus. Rahlfs therefore uses one and the same siglum for both parts.

That's in his "B or Not B? The Place of Codex Vaticanus in Textual History and in Septuagint Research", in Text-Critical and Hermeneutical Studies in the Septuagint, ed. by Johann Cook & Hermann-Josef Stipp (Brill, 2012), pp. 69-96 on p. 72 [screenshot].

When checking LXX manuscript matters, it's always wise to have a look at Alfred Rahlfs, Verzeichnis der griechischen Handschriften des Alten Testaments (Berlin, 1914). It is also conveniently available on Archive.org. It can be a bit complex to use (think "needle", "haystack"), but the appendix with a table of equivalent sigla is very useful for the sort of question the OP has. In this case, Rahlfs' edition of the Septuaginta gives Codex Venetus as V, and there is no entry for N. A check of the appendix of the Verzeichnis, though, shows that several other LXX scholars and/or projects have an N = V equivalence, which would put one on the right trail.

Finally, to make this entry reasonably complete, things are even more confused than this, in fact, since there is also a "Codex Venetus" or in full, "Codex Venetus Marcianus" which is another name for Codex Nanianus, part of the NT manuscript tradition.

For the record, it is possible for this siglum: LXXℵ -- to appear OCR'ed as LXXN.

If the typography is not especially clear, the ℵ element can be confused with N, especially in some older works in which this kind of abbreviation is more common.

LXXℵ points to Codex Sinaiticus (it even has its own website) which has ℵ (the Hebrew letter ʾaleph) as its siglum.

This is an irritating textual note. Patently, the Septuagint of "N" did not read אלהינו - it's an 8th C. Greek manuscript! It's a Greek copy from a Greek exemplar, not a fresh translation of the Hebrew. It gives no evidence for a Hebrew reading. (N.b. - see note 1, below.)

But there is more. Here's Carmel McCarthy's textual note from the Deuteronomy fascicle of her Biblia Hebraica Quinta edition:

In fact, Venetus is not alone as a Greek witness in having a variant at this point. This is the way Brooke-McLean has it: 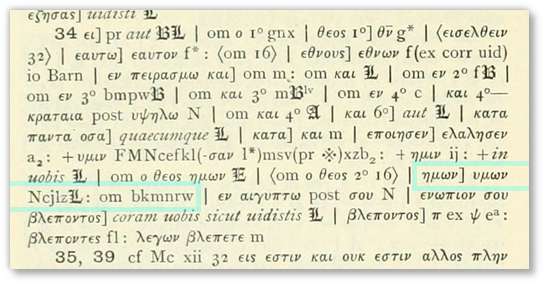 Here, Vaticanus has ἡμῶν, "our God", as well as other Greek mss, cited in Brooke-McLean's apparatus, and this is also the reading in Rahlfs' edition. But "N" is one of a number of Greek witnesses that has ὑμῶν "your God". Which means that -- at least according to the B-M apparatus -- Christensen's note is exactly wrong. Not only is this inner-Greek, but if we were to retrovert N's reading, we would get MT's אֱלֹהֵיכֶם, not אֱלֹהֵינוּ.

But that's not all. In John Wevers' authoritative Göttingen edition of LXX-Deuteronomy, his critical text reads: ἐποίησεν κύριος ὁ θεὸς ὑμῶν ἐν Αἰγύπτῳ, so agreeing with the MT.2 Here's his apparatus for the key word:

So V = N (for so it is) provides evidence for Wevers to adopt ὑμῶν "your God" = MT (Hebrew) as his critical text (i.e., reconstructed "original" old Greek, as it left the translator's pen). ἡμῶν, "our God", is the variation from his putative original.

Christensen's little note is both misleading and mistaken, then. Ad fontes!

Not the answer you're looking for? Browse other questions tagged deuteronomy septuagint or ask your own question.