What does "put the branch to their nose" in Ezekiel 8:17 mean?

Reading Ezekiel 8 in the ESV I came across verse 17 today and was puzzled by phrase there:

Is it too light a thing for the house of Judah to commit the abominations that they commit here, that they should fill the land with violence and provoke me still further to anger? Behold, they put the branch to their nose.

Is it nothing to the people of Judah that they commit these detestable sins, leading the whole nation into violence, thumbing their noses at me, and provoking my anger?

What convolutes the situation is that the ESV gives the marginal reading branch to my nose.

Is this a Hebrew idiom? What does it mean? Does it, or a similar expression, occur elsewhere in Scripture? or elsewhere in Ancient Middle Eastern literature? Has the NLT captured the sense of the idiom?

8:17. "branch to the nose." There is an Akkadian expression (laban appi) that refers to a gesture of humility used to come contritely before deity with a petition. When this act is portrayed in art, the worshiper has his hand positioned in front of his nose and mouth, and is sometimes shown with a short cylindrical object in his hand. From the Sumerian tale called Gilgamesh in the Land of the Living there is some evidence that what is held is a small branch cut off a living tree. This would suggest that in Ezekiel the people are putting on a show of humility. It must be admitted, however, that these connections are very hazy and the significance may lie somewhere else entirely.

As the verses before this talk about how the Hebrews are mixing neighboring religions with true worship (mounrning for Tammuz, idols in the temple courtyard, sun worship), I think the problem is two fold:

The second is the heart of the problem. Crocodile tears for sins would be one way to understand the action. From the actions that follow the acts of contrition, it can be seen that they don't mean it. They aren't truly repenting. It would be like a catholic saying penance prayers and then turning around doing the same thing again.

The actions mean nothing unless the heart is in them.

Putting a branch to God's nose would likely be related to the kindling of God's nostrils. This expression is only used against a whole people when the crime is idolatry, with the exception of the crime of oppressing widows. James Jordan comments on this:

“This is jealousy language. Potiphar’s nostrils were kindled when he suspected Joseph of attempting to rape his wife (Gen. 39:19). The expression occurs four times in Exodus 32 (vv. 10, 11, 19, 22), as God responds to the spiritual adultery of His people...

God, of course, is a consuming fire (Heb. 12: 29), and He manifests His fiery judgment in the flaming sword of the cherubim (Gen. 3:24; Lev. 10:2; etc.), in the fire of sacrifice on the altar, in the lake of fire, and so forth. The particular burning anger of jealousy, however, is pointed to in this expression. God jealously guards His Bride. His nostrils flared against Moses when Moses did not want to deliver Israel (Ex. 4:14). His nostrils burned against Aaron and Miriam when they attacked the privileges of Moses (Num. 12:9). God’s burning anger at Balaam (Num. 22:22) relates to Balaam’s intention of cursing God’s Bride, which in time he succeeded in doing (Num. 25; 31:16).

This leads us to the observation that the widow in Israel was a type of the bride of Adam, whose husband God had killed for his sin. It was needful for a younger brother, the second Adam, Jesus Christ, to take her as His wife. This widow typology is particularly prominent in the book of Ruth and in the theology of Luke (Luke 2:37; 4:25f.; 7:12). The widow is under the special protection of the Lord, until He comes to claim her as His own.”

No, this is not a reference to tobacco or to smoking. But there is some disagreement as to what it is. The New Living Translation translats the verse as follows:

"Have you seen this, son of man?" he asked. "Is it nothing to the people of Judah that they commit these detestable sins, leading the whole nation into violence, thumbing their noses at me, and provoking my anger?

Thumbing the nose? That doesn't sound right--that's a far more modern gesture of insult. So what do other sources say? According to Gesenius, this is a reference to the Jews adopting some Persian Zoroastrian practices.

So what is a barsom? According to some Zoroastrian texts, a barom is a bundle of twigs--some sources say the twigs were tamarisk, some say pomegranate, some say myrtle. 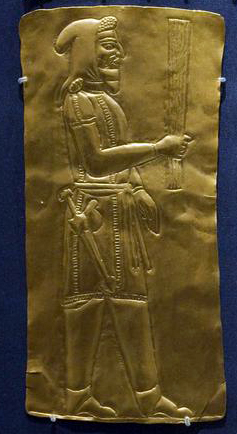 Hmmm, that doesn't look like a branch or a bundle of twigs, but we know from other sources that branches were used at least in parts of Zoroastrian history, so this could simply be a depiction of a very rich priest, and less wealthy priests still used branches.

So you had a group of Jewish priests, in the Temple courtyard, with their backs to the Temple worshiping the Sun in the Persian manner. To a devout follower of the God of the Jews, that would be the very height of insult. Perhaps the translation of "thumbing their noses at me" wasn't that far off at all.

I'm not sure the answer is that complicated. Haven't we all seen the irreverent insult in which one places the tip of their thumb on their nose, extending and waving their fingers like a branch blowing in the wind? The passage serves to futher describe the mockery that has provoked God to anger. The NLT version is the better translation for this passage. The amazing thing is how humanity manages to perpetuate so many customs, some even over many millenia.

From SP (which always finds a reference to Christ):

The branch is Christ:

Isa 11:1 And there shall come forth a rod out of the stem of Jesse, and a Branch shall grow out of his roots:

The primary usage in scripture of 'aph' is not 'nose', but 'anger', translated more than ten times as many places as 'nose'.

As a prophetic metaphor, they WILL put Christ to their anger. This is fulfilled as they shout "Crucify him!"

The context for this is set in the beginning of the verse with "Have you seen, O Son of Man?"

When Jesus claims to be the Son of Man, he is suggesting that they will crucify him in their anger from this passage, among other things from other prophetic shadows.

Not the answer you're looking for? Browse other questions tagged hebrew ezekiel idiom nlt or ask your own question.