What does the Greek word θεότητος in Colossians 2:9 mean?

The Greek word θεότητος is translated differently in English Bibles:

New Living Translation For in Christ lives all the fullness of God in a human body.

New American Standard Bible For in Him all the fullness of Deity dwells in bodily form,

King James Bible For in him dwelleth all the fulness of the Godhead bodily.

What does the Greek word θεότητος in Colossians 2:9 really mean?

Answer: θεότης is an abstract noun that is equivalent to the English word “deity,” meaning “the state or condition of being God.”

The English noun “Godhead” occurs three (3) times in three (3) verses in the King James Version translation of the Bible.1 It is translated from three (3) distinct Greek words in the Textus Receptus: 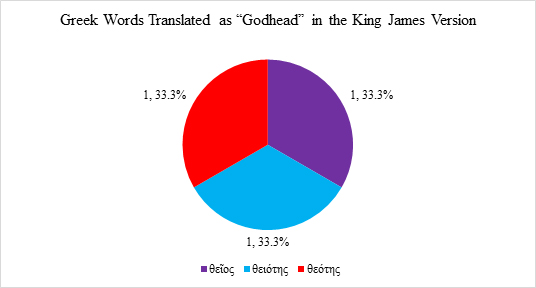 The Greek word θεῖος occurs three (3) times in three (3) verses in the Textus Receptus, yet it is only translated into English as “Godhead” in one (1) verse in the King James Version: Acts 17:29.

29 Forasmuch then as we are the offspring of God, we ought not to think that the Godhead is like unto gold, or silver, or stone, graven by art and man’s device. KJV, 1769

3 According as his divine power hath given unto us all things that pertain unto life and godliness, through the knowledge of him that hath called us to glory and virtue: KJV, 1769

4 Whereby are given unto us exceeding great and precious promises: that by these ye might be partakers of the divine nature, having escaped the corruption that is in the world through lust. KJV, 1769

The Greek word θειότης occurs once (1) in one (1) verse in the Textus Receptus, Rom. 1:20, being translated into English as “Godhead” in the King James Version.

The Greek word θεότης occurs once (1) in one (1) verse in the Textus Receptus, Col. 2:9, being translated into English as “Godhead” in the King James Version.

In summary, the English noun “Godhead” occurse three (3) times in three (3) verses in the King James Version, being translated from three different Greek words: one adjective and two nouns.

The Greek word θεῖος is an adjective formed by the inclusion of the diphthong ει in the noun θεός.

The same analogy may be demonstrated in the formation of the adjective ἀνθρώπειος, meaning “human.”

As an adjective, θεῖος can be declined according to gender and number.

The Greek words θειότης and θεότης both contain the suffix -της. Like the English suffix -ness, the Greek suffix -της converts an adjective into an abstract noun.

For example, “The horse is white,” or in Greek, «ὁ ἵππος ἐστὶ λευκός». We can see that the horse is white; thus, the adjective “white” (λευκός) is a concrete word. We may convert the English adjective “white” into an abstract noun by simply adding the suffix -ness, hence “whiteness.” “Whiteness” is defined as “the quality or state of being white.” In the sentence, “The horse’s whiteness exceeds that of its kin,” whiteness itself cannot be discerned or known by any of the five senses. It is the quality or state of being white, and therefore, it is an abstract noun. Likewise, we may convert the Greek adjective λευκός into an abstract noun by adding the suffix -της to the word λευκός, hence λευκότης.

Other English and Greek words are formed based on the same analogy:

In The Cambridge History of the English Language, it states,2

The main suffixes that derive abstract nouns from adjectives are the native -ness and the French-derived -ity. Both are very productive in Early Modern English and have partly overlapping input ranges. Both are used to form derivatives that denote abstract states, conditions, and qualities, and this is the semantic domain that prevails with -ness…

The suffix -ity has a wider semantic range than -ness; in addition to the abstract notions of state, condition and quality, it is found in coinages such as capability, oddity, peculiarity, and regularity, which may have concrete denotations and appear in the plural. The suffix was adopted from late Middle English French and Latin loan words, but from the sixteenth century onwards it became synchronically associated especially with adjectives ending in -able/ible, -ic, -al, and -ar. Except for a few cases with native bases such as oddity, -ity was applied to Latinate bases…

The English word “divine” is etymologically derived from the Latin word divinus; hence, “div-” is a Latinate base. Therefore, instead of “divineness,” which is not an actual word, the abstract noun derived from the adjective “divine” would be the noun “divinity.”

Among its several definitions, “divinity” may be defined as “the quality of being divine.” It is not surprising that St. Jerome translated the Greek word θειότης in Rom. 1:20 into the Latin Vulgate as divinitas, the Latin equivalent of the English word “divinity.”

However, unlike the English words “dry,” “wet,” “fat,” “thin,” and the Greek word θεῖος, the Greek word θεός, from which θεότης is derived, is a noun, not an adjective. Therefore, it doesn’t seem that we can determine its meaning using the same analogy:

Another analogy is based on the Greek word ἀνθρωπότης. This abstract noun is formed from the Greek noun ἄνθρωπος, meaning “human” or “man,” and the suffix -της. The English equivalent of ἀνθρωπότης would be the abstract noun “humanity,” which may be defined as “the quality or condition of being human.” We may discern an ἄνθρωπος and a “human” by our five senses. On the other hand, ἀνθρωπότης and “humanity” cannot be discerned by our five senses, and therefore, they are abstract nouns. More importantly, we find the following analogy:

Like ἄνθρωπος, the Greek word θεός is also a concrete noun. In other words, it refers to a particular person who may be discerned or known by one of the five senses (certainly θεός is not an abstract noun). Based on the same analogy formed above, we may now understand the meaning of θεότης.

In summary, θεότης is equivalent to the English word “deity,” that is, “the quality or condition of being God,” while θειότης is defined as “divinity,” that is, “the quality or state of being divine.” The remaining Greek word, θεῖος, is an adjective meaning “divine”; it is the adjective from which the abstract noun θειότης (not θεότης) is derived.

A very good answer by @Tish, for indeed in θεό-της the -της is a suffix that corresponds to English -ty, -ity, -ness; like, from the word ὕδορ (water) is derived ὑδρότης (wetness, water-ness), and indeed the "waterness"/"wetness" fully defines water, as "god-ness", "divin-ity" fully defines "god". Thus, the phrase "in Christ dwells the fullness of [God's] God-ness" reads similarly to a phrase "in this raindrop dwells fulness of [water's] wetness".

This indicates most unequivocally the full divinity of Jesus Christ, for neither any man, even most saintly one, nor any angel, even the highest in angelic hierarchy can contain the "fulness" or "entirety" of Divinity (because, in creatures - men, angels - the divine presence is not full, but apportioned), but only the one who is equally divine. Logos/Son is Father's equal, thus demanding the very same honour /John 5:23/ (which in tongue of any creature - saint or archangel - would be either a gross idiocy or a horrid blasphemy), and Logos indwelling in human nature and human body taken from Mary, can be called "Divinity fully present in a bodily form", for to Logos pertains the same fullness of the Father's Divinity as to the Father Himself.

First of all, θεότητος is the genitive singular case of θεότης. If you are going to discuss a Greek word you should quote it in the citation form, here the nominative singular θεότης.

-της is a very common and productive suffix for forming abstract nouns, in this instance from the word for “god”. θεότης occurs both in the NT and in pagan authors:

Consequently you could translate θεότης as “god-ness”, “godhood”, or by Latinate forms like “deity, divinity”. But to render it merely as “God” is wrong.

Simply a Christian answered correctly. To add a little more and to object fdb's position, what makes a person ἄνθρωπος is ἀνθρωπότης. The same applies to the above passage; what makes God θεός is θεότης. Then this passage, by saying the fullness of θεότης (or θεότητος as in the original text) dwells in him, is trying to mean "Christ was fully God".

Not the answer you're looking for? Browse other questions tagged greek colossians translation-philosophy trinity or ask your own question.

3
What is the Godhead?

5
What does the phrase 'ἐν Χριστῷ' in the Pauline Corpus mean?
0
What is the difference between the indwelling of God in Christians and the indwelling of the Godhead in Christ?
2
What does "the flesh" mean in 1 John 4:2
1
Can εις αυτον mean 'to itself' in Colossians 1:20?
4
Why do many English translations of Colossians 1:29 not translate the Greek word "KAI"?
5
Colossians 2:8,9,10; was Jesus a Philosopher?
2
How should we understand Colossians 2:9 in contrast to [Isaiah 7:14-16, Matthew 1:22-23]?
0
In Colossians 2:9 - Are Fully Deified souls in Christ ( πλήρωμα τῆς Θεότητος) : Sinless or Omnipotent?
6
What does it mean that "it pleased the Father" for "all the fullness" to dwell in Jesus (Colossians 1:19, NKJV)?