Does Paul use a “Double Meaning” in his statement, “They were all baptised into Moses in the cloud and in the sea.”

I am studying in 1st Corinthians chapter 10:1-2 and Paul voices an ambiguous statement which reads,

1 For I do not want you to be ignorant of the fact, brothers and sisters, that our ancestors were all under the cloud and that they all passed through the sea. 2 They were all baptized into Moses in the cloud and in the sea.

When i study verse 2 of this scripture, i feel that Paul is using a double meaning and i find that the word cloud and sea is where the double meaning comes into play.My explanation is as follows.

I will use the only allegory i can think of to explain my reasoning.Talking about my bank in a slightly derogatory manner i would say,

They were all baptised into Moses in the Cloud and in the water.

We can now see what i think to be the double meaning with the change from sea to water. But what about the cloud.When i look in there i find nothing whatsoever to do with baptism.So how can a person be baptised into the cloud when it contains "nothing." I think the meaning of the cloud rests in this scripture,

During the last watch of the night the Lord looked down from the pillar of fire and cloud at the Egyptian army and threw it into confusion.

This scripture appears to be saying that the cloud contains "fire" which would now introduce the second "double meaning" and the scripture would now read as follows,

They were all baptised into Moses in the fire and in the water.

This would appear to myself that Paul is speaking about this scripture recorded in "The gospel of Matthew," in the double meaning.

My question is,does Paul use a double meaning in his statement?

There is one single meaning in both the Hebrew Bible (Old Testament) and New Testament: the cloud represents the Divine Presence. The Divine Presence corresponds to the Spirit, by whom the believer arrives to divine rest through the water. The 19th Century Bible scholar Hermann Olshausen (1825) made the following comment in this regard (with emphasis added):

As in John 3:5, baptism is represented as regeneration from water and spirit, so here the cloud (symbol of the Divine Presence) is to be understood as the type of the Spirit. Not that the apostle intended by any means to assert that the passage through the Red Sea under the conduct of the pillar of cloud exercised a similar power to that possessed by baptism; that event was simply an image of the latter. Yet this passage, as the actual means of release from their former rulers, was introductory to the future relation of Israel to Moses, the leader appointed to them by God; hence the additional phrase εἰς τὸν Μωϋσῆν, unto Moses, by which is signified the connexion of the people with the economy of the Old Testament, represented by Moses.

The people were "saved" through Moses. Moses was the hand of the outstretched arm from heaven. Actual entrance into the rest of the Promised Land did not occur until forty years later, when the cloud (Divine Presence) brought the people through the water of the Jordan River. It was through this river that John the Baptist announced the New Covenant, by which the forgiveness of sins would occur by the Lamb of God. Baptism through this Lamb (the Divine Presence) would lead into the rest of the Promised Land, or eternal life.

For example, the Peshitta (Syriac translation of the Bible) provides an excellent perspective; the verse at hand occurs as follows in the Syriac. Please click on the image to enlarge for better viewing. 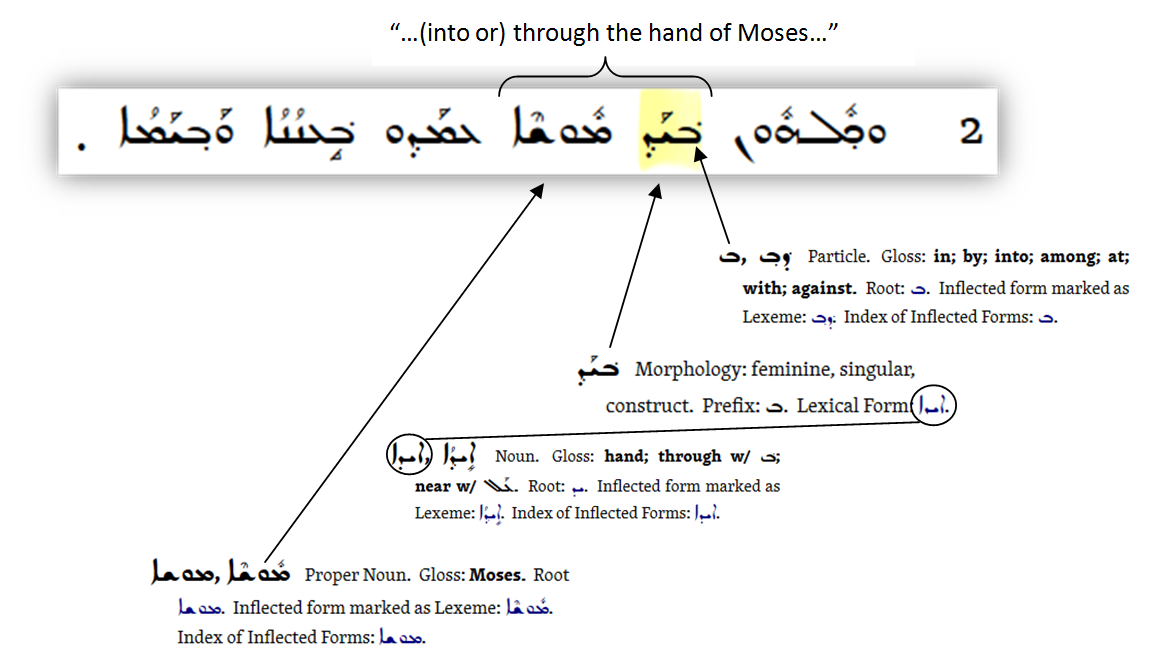 Exodus 14:31 (NASB)
31 When Israel saw the great power which the Lord had used against the Egyptians, the people feared the Lord, and they believed in the Lord and in His servant Moses.

However, when later tested in the wilderness wanderings, their "faith" revealed their actual unbelief (Hebrews 3:19). Therefore, the readings in Hebrews 11:24-29 refer not the faith of the Israelites who escaped Egypt, but to the faith of Moses, by whom they escaped by the cloud and water of the Red Sea. Again, the contents of Hebrews 3:1-19 and Hebrews 4:1-10 reinforce the view that these Israelites did not reach the promised land because of unbelief. That is, their "faith," when tested, revealed that they were in fact idolaters.

Acts 7:41-43 (NASB)
41 At that time they made a calf and brought a sacrifice to the idol, and were rejoicing in the works of their hands. 42 But God turned away and delivered them up to serve the host of heaven; as it is written in the book of the prophets, ‘It was not to Me that you offered victims and sacrifices forty years in the wilderness, was it, O house of Israel? 43 You also took along the tabernacle of Moloch and the star of the god Rompha, the images which you made to worship. I also will remove you beyond Babylon.’

The entirety of Psalm 106 is another summary of the unbelief of the generation of Israelites who had escaped from Egypt.

Therefore these Israelites did not cross the Jordan River, where the Divine Presence (without any mediatorial role provided by Joshua) had led the uncircumcised (!) second generation of Israelites into the rest of the Promised Land. The New Testament nuance here might well be that "the gate is small and the way is narrow that leads to life, and there are few who find it" (Matt 7:14).

Here we have the foreshadowing of baptism, mentioned by St. Paul. We should note what the cloud represents, first of all. In the old testament when the temple of the Lord is constructed a cloud would defend and reside for the period. Here the Priests and Jews in the temple recognized the cloud as the presence of Elohim.

During the erection of the tabernacle, we can find some insight as to the representation of the cloud.

The presence of the Lord with the Hebrews during the Exodus is represented by the cloud and fire. This is also showing that the Spirit of God was with them, upon them. The Spirit worked in two ways for the Hebrews: for protection against Egyptians and for protection from the scorching heat of their travel. God was their shade as the cloud encompassing them. The fire by night or pillar of fire served as the presence of God in the dark. He was their light so they could see through the darkness; this would also serve as the warmth from the cold of the desert at night. The cloud then represents the covering presence of the Lord, the fire represents the light through the darkness and the warmth of his presence in the darkness. This cloud shows they're covered by God's presence. Symbolically we are covered by God's presence when receiving the baptism of the Holy Spirit.

"But you will receive power when the Holy Spirit comes on you, and you will be my witnesses in Jerusalem, and all Judea and Samaria, and to the ends of the earth."

The sea serves as symbology in St. Paul's analogy, in that, through the sea, water serves as a type of purification and regeneration. The Hebrews are leaving Egypt and are leaving their condition of bondage to the Egyptians. It's not enough to recognise their physical deliverance. There's also the fact that, as an act of faith, they were expected to follow the instructions of Moses, who was the mediator God used for their deliverance. By a continued faith in what God could do, based on what He had done, their faith should also exemplify leaving behind the ways of Egypt (inward desires and practices). This is shown when Moses chastises the Hebrews after returning with the ten commandments. In the same manner water baptism is the recognition of putting to death the sinful nature and being made alive regenerated by the Holy Spirit unto salvation. The whole Exodus account is foreshadowing the Gospel of Christ.

Does Paul use a “Double Meaning” in his statements in 1 Corinthians 10?

Additional from the OP: "In the cloud I find nothing connected to baptism but when I look in the sea I find "water", [therefore:] "They were all baptized into Moses in the Cloud and in the water." "What about the cloud?... I think the meaning of the cloud rests in this scripture":

Exodus 14:24 NIV: "During the last watch of the night the Lord looked down from the pillar of fire and cloud at the Egyptian army and threw it into confusion."

"The text appears to be saying that the cloud contains 'fire' which would now introduce the second "double meaning" and the scripture would now read as follows: 'They were all baptized into Moses in the fire and in the water.' This would appear to me that Paul is speaking about that recorded in the Gospel of Matthew, in the double meaning."

Matthew 3:11 NIV: "I baptize you with water for repentance. But after me will come one who is more powerful than I, whose sandals I am not fit to carry. He will baptize you with the Holy Spirit and with fire."

Answer: Indeed, there are parallel meanings here — and much more.

Suppose we start with these three based on Paul's words:

1 Peter 1:7: "[Being] more precious than gold which is perishable, even though tested by fire [the lusts of the world], may be found to result in praise and glory and honor... in Christ."

Suppose we again observe the first four passages of 1 Corinthians 10 before we proceed further:

Here is the typology (foreshadowing of the New Testament in the Old) described by Coffman1 in his analysis of 1 Corinthians 10:1-4 (I have embedded my own reflections within the bracketed notation):

THE GRAND ANALOGY OF ISRAEL

Other analogies in [these remarkable allegories] may be pointed out, but the above is sufficient to show the extensive parallel between the fleshly, [physical] Israel and the spiritual Israel [in Christ].

Not the answer you're looking for? Browse other questions tagged 1-corinthians moses or ask your own question.