What type of plant was the bush of Exodus 3:2?

What type of plant was the bush of Exodus 3:2?

And the angel of the Lord appeared to him in a flame of fire out of the midst of a bush. He looked, and behold, the bush was burning, yet it was not consumed.
(Exodus 3:2, ESV, emphasis mine) 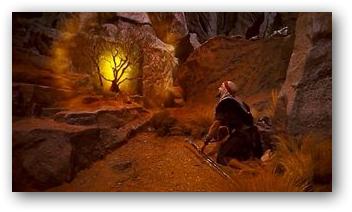 Jewish rabbinic tradition indicates that this bush was not only the "lowliest" of thorn briars, but the most dangerous for wildlife. (That is, the imagery was the burning bondage of the "oven" of Egypt. The rabbis related that the imagery conveyed the compassion of the Lord for his people.) Some scholars lean toward the acacia bush or the Rubus Discolor as the particular species of this "burning bush."

Jewish Midrash provides some insight as to the identification of this bush. According to Wikipedia, Midrash is

...the body of exegesis of Torah texts along with homiletic stories as taught by Chazal (Rabbinical Jewish sages of the post-Temple era) that provide an intrinsic analysis to passages in the Tanakh. Midrash is a method of interpreting biblical stories that goes beyond simple distillation of religious, legal, or moral teachings. It fills in gaps left in the biblical narrative regarding events and personalities that are only hinted at. The purpose of midrash was to resolve problems in the interpretation of difficult passages of the text of the Hebrew Bible, using Rabbinic principles of hermeneutics and philology to align them with the religious and ethical values of religious teachers.

One particular Midrash concerning the Book of Exodus is the Mekhilta de-Rabbi Shimon bar Yoḥai (Aramaic = מכילתא דרבי שמעון בר יוחאי), which is an anthology of early Rabbinic traditions of interpretation (i.e., midrash) of the biblical Book of Exodus. According to Nelson (2006), the majority

...of the traditions it preserves were created during the tannaitic period of early Rabbinic Judaism (approximately 70–200 C.E.), although a portion of its material dates to the beginning of the subsequent amoraic period (approximately 200–500 C.E.). The date of editorial redaction of these traditions into anthological form is uncertain; however, the scholarly consensus is that the text was edited sometime during the amoraic period.

The following Midrash citation comes from the English translation by Nelson (2006) of Tractate Sanya, 1:1 of the Mekhilta de-Rabbi Shimon bar Yoḥai - 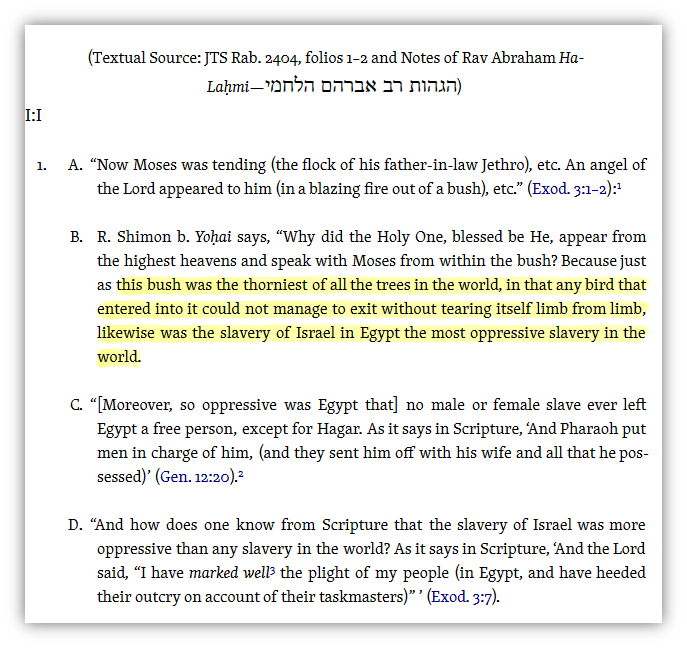 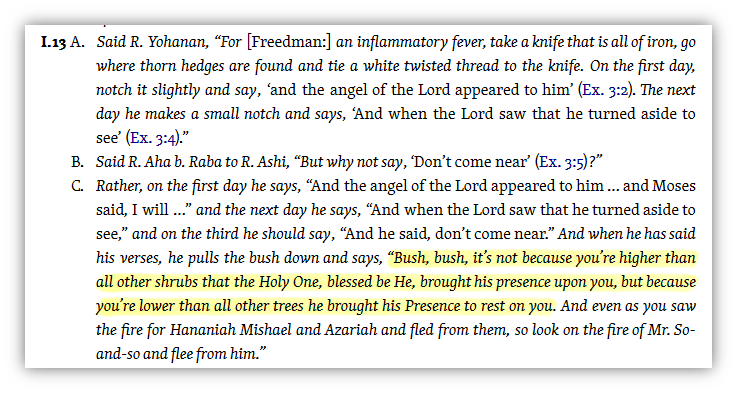 The references to Hananiah, Mishael, and Azariah are Shadrach, Meshach, and Abednego (the three companions of Daniel who were cast into the burning furnace of Nebuchadnezzar). Throughout the Hebrew Bible, the plight of the Israelites in the land of Egypt was described as "the oven."

Deut 4:20 (NASB)
20 But the Lord has taken you and brought you out of the iron furnace, from Egypt, to be a people for His own possession, as today.

1 Kings 8:51 (NASB)
51 (for they are Your people and Your inheritance which You have brought forth from Egypt, from the midst of the iron furnace),

Jer 11:4 (NASB)
4 which I commanded your forefathers in the day that I brought them out of the land of Egypt, from the iron furnace, saying, ‘Listen to My voice, and do according to all which I command you; so you shall be My people, and I will be your God,’

In summary, both the Hebrew Bible and Jewish tradition (as codified in the Babylonian Talmud) indicate the "lowliest" place of the Lord among his people, for whom he has compassion.

Returning to the same texts of Midrash, the burning bush signifies the Lord's identification with his people as if the Lord was suffering with and through them. Please note the highlighted areas in yellow. The following Midrash citation comes from the English translation by Nelson (2006) of Tractate Sanya, 1:2 of the Mekhilta de-Rabbi Shimon bar Yoḥai - 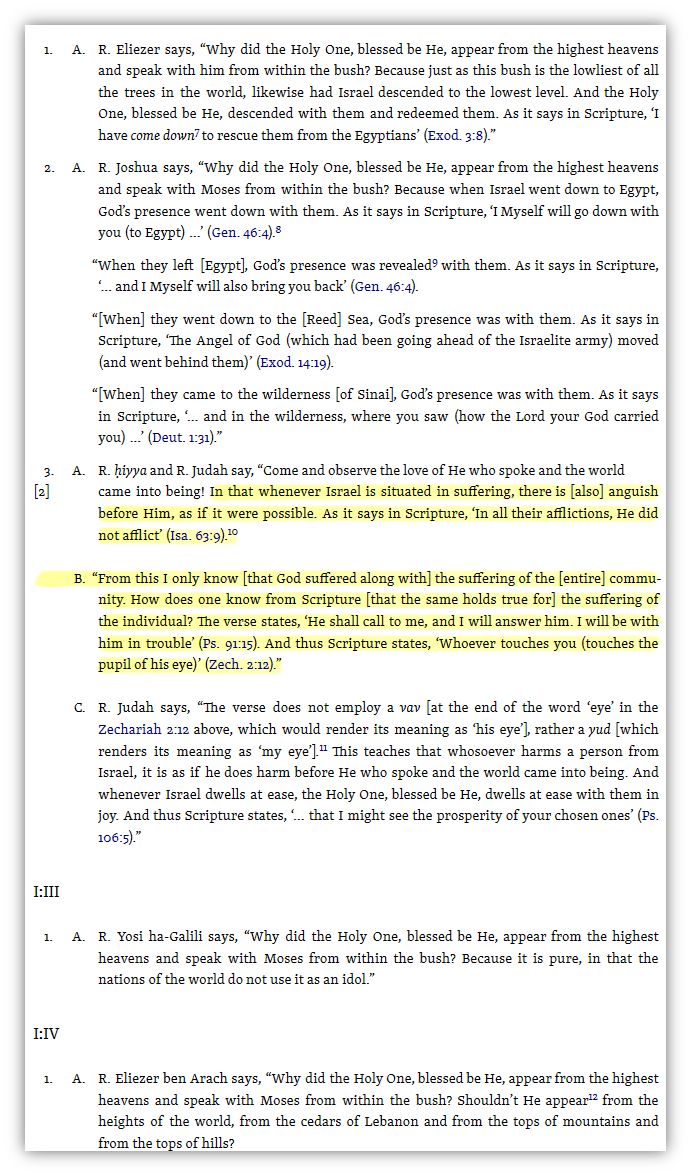 In summary, the Israelites were suffering in "the iron furnace" of Egypt, but they were not consumed just like Shadrach, Meshach, and Abednego were not consumed in the furnace of Nebuchadnezzar. In the story of Shadrach, Meshach, and Abednego the angel of the Lord experienced the turmoil of "the iron furnace" with them, and, in like manner, the burning bush conveys the imagery (in Jewish oral tradition) of the Lord's compassion and identification with the humiliation and suffering of his people. That is, the Lord was IN the fire of the burning bush that was not consumed. Please note the last paragraph of the Midrash citation above - that is, the Lord did not appear to Moses in the glorious cedars of Lebanon or from other such lofty plane. Thus the thorn bush represents the "lowliest" in contradistinction to trees of glory (such as the cedars of Lebanon) as the following verse appears to indicate.

Judges 9:15 (NASB)
15 The bramble said to the trees, ‘If in truth you are anointing me as king over you, come and take refuge in my shade; but if not, may fire come out from the bramble and consume the cedars of Lebanon.’

What kind of thorn bush is here?

According to Spence-Jones (1909), Senek, which is the word translated “bush,” is still the name today of a thorny shrub, a species of acacia, common in the Sinaitic district. (In fact, this Hebrew word appears similar to the Hebrew word for Sinai.) However, Rabbi Moshe David Cassuto (1997) goes further and makes the following observations.

Although the bush (i.e. black-berry, Rubus Discolor) is commonly found in steppe country, and it is no unusual phenomenon for a bush dried by the summer’s heat to catch fire, yet the bush that Moses saw was not consumed in the flame (לַבַּת labbath stands for לַהֲבַת lahăbhath, as in Psa. 29:7: ‘flames of [לַהֲבַוֹת lahăbhōth] fire’, and thus, in fact, in its fuller and more usual form, the word is found in the Samaritan Pentateuch).

Cassuto appears to draw his inference from Keil & Delitzsch (1996) that [סְנֶה = βάτος (LXX) = Rubus]. Cassuto also makes the correct observation that the Samaritan Pentateuch reads "in flames of fire" (using the plural construct form of לֶהָבָה, where the emphasis is brilliance) instead of "in a flame of fire" noted in the Masoretic Text (using the singular construct form of לַבָּה, where the emphasis is "fire"). The nuance is slight, but the Masoretic Text would "downplay" the glory of the Lord in the burning bush by not using the Hebrew word לֶהָבָה, which emphasizes brilliance, and thus the imagery of humility and condescension.

The scientific nomenclature of this thorn bush does not appear to have as much significance as the size and nature of this plant: that is, in contradistinction to the magnificent glory of other plant species (such as the cedars of Lebanon), the Lord appears in the smaller thorn bush. The burning thorn bush appears not only in parallel to the conditions of the Israelites in Egypt, which is "the iron furnace," but also as a prison, since the thorns preclude any escape.

However, since the Lord is present, the bush is not consumed. In other words, the covenant made by the God od Israel will never allow the Jewish peoples to perish in the flames of any furnace. Although they suffer, they do not do so without the direct knowledge, compassion, and participation of the "God of Abraham, Isaac, and Jacob," who will save them.

It is thought that the bush may have been a Dictamnus plant. The Dictamnus plant produces a volatile oil that has been known to catch fire. However, the fire is often a relatively quick flashover rather then a long sustained fire.

Not the answer you're looking for? Browse other questions tagged exodus or ask your own question.