In Psalm 23, David talks about the Lord providing a "table" in the presence of his enemies. Just what does this table represent?

You prepare a table before me
in the presence of my enemies;
you anoint my head with oil;
my cup overflows.

[OP]: Just what does this table represent?

First, except in the most qualified sense, this is not what is in mind in Psalm 23:5 - 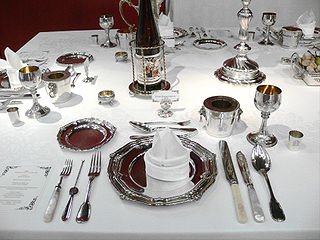 The Hebrew term for "table" is שֻׁלְחָן šulḥān (71× in the Hebrew Bible), still the common word in use in Israeli Hebrew. But in the world of the psalmist, it isn't certain whether this is a "slab top supported by three or more legs" piece of furniture. As the BDB definition makes clear, a šulḥān could be also be some kind of mat.

It is important also to note the distribution in the Hebrew Bible of this simple lexeme. It appears frequently as one of the temple accoutrements (e.g., Exodus 25:23; 37:10; 40:22; Num 4:7; etc.). Here, with the dimensions given and instructions for its transportation and use, it resonates with a "table" in the modern connotation (slab-top-on-legs furnishing). It is, then, a sacred item for use in tabernacle (and later temple, 1 Kings 7:48; cf. Ezekiel 41:22).

Very occasionally, a šulḥān is found in private use, but this is rare (e.g. 1 Kings 13:20; 2 Kings 4:10). Possibly Proverbs 9:2 belongs here too, but this chapter's depiction of rival feasts looks much more like the "high status" situation, analogous to that of the royal or official court.

When we are confronted with a "prepared table" in Psalm 23:5, then (cf. Isaiah 21:5), we need to think of something like a religious or royal setting: something a cut above the ordinary, in any case.

This brings us to the verse in question. As many commentators note, this is clearly hospitality language, in which the LORD is the "host", and the psalmist the "guest". With the preceding discussion of šulḥān in mind, it is clear that the "host" at "table" is likely to be a person of considerable status, and the setting that of the royal (or sacred) court most likely.

This makes even more sense of the "presence of enemies", as this is not a neutral feast, but rather a display of provision and largesse in which the host's favour for the guest is seen all the more sharply for having the "enemies" excluded and looking on. It is provision that implies protection.1

Kenneth Bailey develops the hinterground of the "hospitality" theme.2 He goes on to make the suggestion that since food preparation was traditionally women's work in the ancient Near East (and beyond, one might add), this incorporates a "female component" to God's character in the psalm. This might be slightly over-interpreting, but worth pondering all the same.

The "table" of Psalm 23:5 is a place of royal provision in which the Deity's generosity for the psalmist is depicted. It thus extends the sense of divine care experienced by the psalmist by adding another metaphorical layer to the pastoral (23:1-3) and pilgrimage (23:4) metaphors which precede.

I like the interpretation of Gill's Exposition of the Entire Bible :

Thou preparest a table before me,.... In a providential way granting a sufficiency, and even an affluence of temporal good things; the providence of God lays and spreads a table for his people in the wilderness, and sets them down at it, and bids them welcome to it; see Psalm 78:19; and in a way of grace, the Lord making large provisions in his house for them, called the goodness and fatness of his house, and a feast of fat things; and under the Gospel dispensation, the table of the Lord, on which are set his flesh and blood for faith to feed upon; see Proverbs 9:2; and also in heaven, the joys of which are compared to a feast, and the enjoyment of them to sitting at a table, and which are prepared by the Lord for his people, from the foundation of the world; and of which they have some foresight and foretaste in this world; see Luke 22:30; and all this

in the presence of my enemies; they seeing and envying the outward prosperity of the saints, whenever they enjoy it, and their liberty of worshipping God, hearing his word, and attending on his ordinances, none making them afraid; as they will see, and envy, and be distressed at a more glorious state of the church yet to come, Revelation 11:12; and even, as it should seem from the parable of the rich man and Lazarus, the glory and happiness of the saints in the other world will be seen, or by some way or other known, by wicked men; which will be an affliction to them, and an aggravation of their misery; though here it seems chiefly to regard the present life. Some have thought there is an allusion to princes, who, having conquered others, eat and feast at a well spread table in the presence of the conquered, and they being under it; see Judges 1:7;

10
How is Psalm 34 linked to 1st Samuel 21?
1
Psalm 23 - long long pursuit of the house of the LORD
3
In Psalm 3:3, what does David mean by saying to YHVH, "You are my glory"?
3
In light of Proverbs 24:17 , how would we go about justifying or reasoning Psalm 54:5-7 claim of being satisfied with enemies' destruction?
4
In Psalm 76:10, does God tactfully use the wrath of his enemies to Glorify Himself, and finally destroys the remainder?
2
In Psalm 113:7 verse, what is suggested by the use of the word "poor"?
5
Does Hebrews use Psalm 95 to speak about Jesus and His presence during the Exodus?
4
Didn't David and Isaiah believe they would go to a paradise, in the presence of God, where they would worship Him, as soon as they died?
1
Are Psalm 41:1-2 & Psalm 51:11-12 referring to the same spiritual experience?