What did Hosea mean when he said, " the children of Israel will be without an image? "

I was reading an answer to a question which was recently asked and there is a reference to the book of Hosea (KJV) and the text reads,

Hosea 3:4 is part of a brief "reprise" of the "prophet-as-symbol" in his relationship with an unfaithful woman/spouse. (The terms of their relationship and the connection between Hosea 1 and 3 are matters of discussion, even dispute, among interpreters.)

Here it appears to be part of a redemption scene, as the woman is taken into the prophet's home, now separated from the temptations to infidelity. The symbolic analogy is to Israel as "spouse", and the LORD in the role of the prophet.

OP's verse of interest, Hosea 3:4, comes in the context of the deprivation that leads to fidelity. It itemizes a number of aspects of Israel's corporate and religious life that that are to be deprived in order to induce the right orientation of people to God. Conveniently taken as three pairs, they will lack:

OP's interest (as I understand it) is in the nature of the maṣṣēbâ, and what would it mean to go without it?

maṣṣēbâ (singular; maṣṣēbôt plural) is usually translated "standing stone" or the like; it is used 36× in the Hebrew Bible. 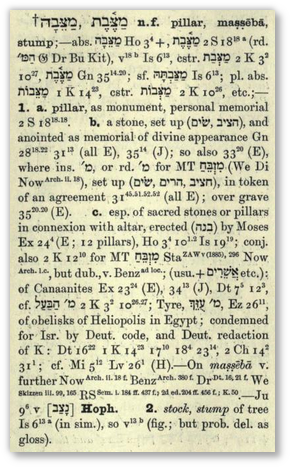 It is a stone pillar of some kind, used as a memorial stone or cult object;1 in the latter case it is usually associated with the male deity (typically baʿal in the context of Canaanite religion, while the asherah or wooden object was associated with the female deity).2 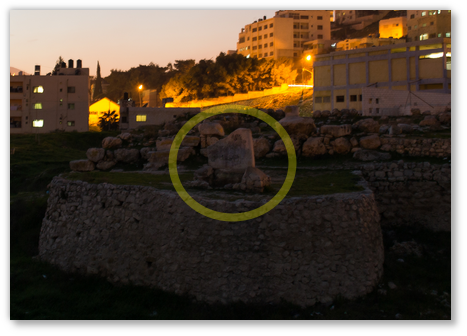 It is quite clear that Hosea's convictions fall into the latter category. The KJV's "image" as cited by OP is more commonly translated "[sacred] pillar, stone" or the like.

10:1 Israel is a luxuriant vine;
He produces fruit for himself.
The more his fruit,
The more altars he made;
The richer his land,
The better he made the sacred pillars.
2 Their heart is faithless;
Now they must bear their guilt.
The Lord will break down their altars
And destroy their sacred pillars.

The passage goes on to speak of kings, thus bringing together all the main elements also seen in the list of 3:4.

It is clear here in ch. 10 that the indictment is that any flourishing became associated with and devoted to the prohibited cult objects and promoted (in the point of view of the prophet) the perverse worship of the people. This false perception and devotion bring judgement in the form of the destruction of the place of worship. In this Hosea 3:4 finds a strong parallel in Hosea 10:1-2.

These elements of deviation from the worship of the LORD -- king, official cult, and domestic shrine -- will all be withrdrawn through the judgment of the LORD. The KJV's "image", more commonly "[stone] pillar", in particular represents an object that is associated with the male deity, and thus a particular offence in to the prophet who urges fidelity to the LORD who is not represented by any image whatsoever.

I found this in Rashi's Commentary;

nor pillar: The pillar of Baal in Samaria of the kings of Israel

מַצֵּבָה (matstsebah) is translated "pillar", and the word is used in 32 occurrences. Since Hosea probably prophesied during the time of the Assyrian Dispersion; see here, he would have seen the 'pillar' of Baal which is described in 2 Kings 10:27,

This "pillar" and the cult of Baal which had priests that Jehu slayed, was reverenced by the previous kings of Israel, of which Ahab was one(vs 18). But although Jehu cut down this pillar, he didn't follow after God with a whole heart(vs 31), and left the high places intact, which apparently allowed the re-introduction of the "pillar" by the time of Hosea.

Therefore, the invading Assyrians took away the king, princes, sacrifices(pagan or otherwise), Pillar, ephod(or priesthood-ephod being a priestly garment), and terephim(idols). In other words, they took away the bad with the good.

In the Book of Hosea, Hosea expresses intense anger because of Israel's worship of other gods. In verse 1:2, Hosea likens the unfaithfulness of Israel to his own wife, Gomer’s later unfaithfulness to him. The following verses are full of this symbolism.

Verses 3:1-3 refer to Hosea’s personal relationship, but its meaning is also debated among scholars. Does it mean that Hosea is buying Gomer back after she has left him, is it a retrospective to his first marriage to her, or is he buying another woman? But it does seem that he believs she will be faithful. Then verse 3:4, Israel will also be faithful - to God:

The Jewish Encyclopedia describes a teraphim as "a plural word of unknown derivation used in the Old Testament to denote the primitive Semitic house-gods whose cult had been handed down to historical times from the earlier period of nomadic wanderings."

Just as Hosea's wife (whether Gomer or a second wife) will be faithful to him, so will Israel be faithful to God. The Israelites will not keep their images of gods, or teraphim.

Not the answer you're looking for? Browse other questions tagged hebrew word-study hosea or ask your own question.